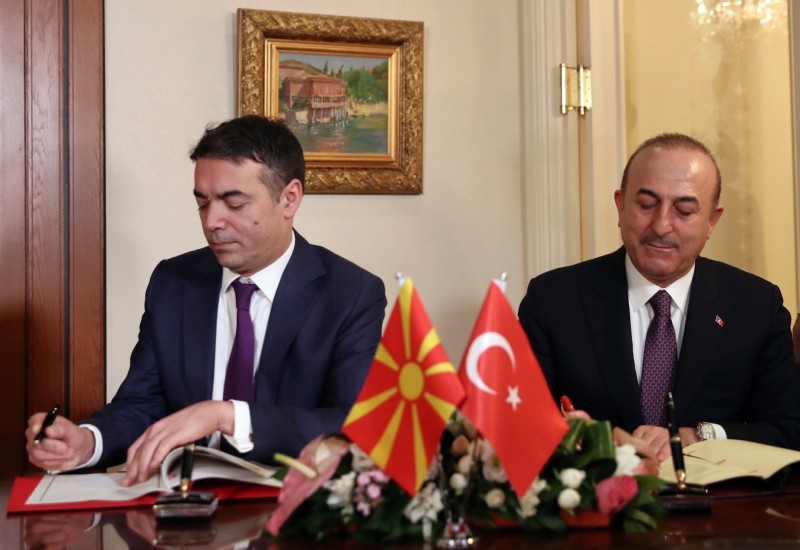 Turkey supports Macedonia in its name clash with Greece as the country has been recognizing its constitutional name since 1991 when it received independence from Yugoslavia, Foreign Minister Mevlüt Çavuşoğlu said Thursday.

Çavuşoğlu held a meeting with his Macedonian counterpart, Nikola Dimitrov, on the occasion of a working visit in which all aspects of bilateral relations were discussed, and the two ministers exchanged views over current regional and multilateral issues, including the name clash between Macedonia and Greece.

At the joint press conference held following the meeting, Çavuşoğlu noted that Turkey recognizes Macedonia by its constitutional name, adding Macedonia's stability in the Balkans is important.

Last week, Macedonia fulfilled its part of a historic deal to pave its way to NATO membership and normalize relations with neighboring Greece, after lawmakers approved constitutional changes to rename the country North Macedonia. The move was hailed by NATO and the European Union, which had lobbied heavily for Macedonia to back the agreement despite strong criticism from the country's main opposition party and from Greece's prime minister, who has invested heavily in the deal.

The agreement to change the name comes after a 27-year dispute with Greece, which complained that this small, landlocked country calling itself Macedonia implied claims on Greece's own territory and cultural heritage, which Macedonian leaders denied.

Stressing that Turkey's relations with regional countries including Albania, Serbia, Bosnia-Herzegovina, Kosovo and Montenegro are at a good level, Çavuşoğlu said Ankara considers stability in the region important and supports its economic development.