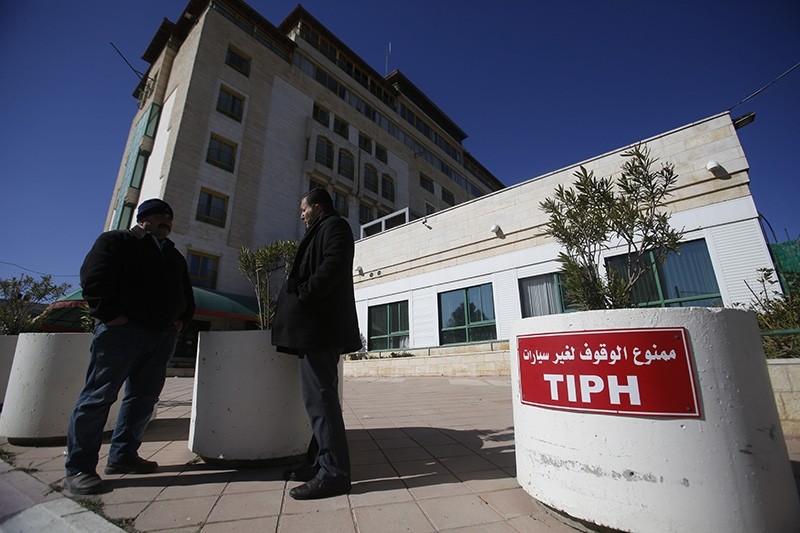 Palestinians stand in front of headquarters of the Temporary International Presence in Hebron (TIPH), in the West Bank city of Hebron, Friday, Feb. 1, 2019. (AP Photo)
by Compiled from Wire Services Feb 01, 2019 12:00 am

Turkey on Friday "strongly" condemned Israel's unilateral termination of a group of international observers in the occupied West Bank city of Hebron.

Israeli Prime Minister Benjamin Netanyahu announced Monday he would not extend its mandate, accusing it of bias.

"We strongly condemn Israel's unilateral termination of the mandate of the Temporary International Presence in Hebron (TIPH), the multilateral observation mission in Hebron, Palestine," the Turkish Foreign Ministry said in a statement urging reversal of the decision.

The ministry "decisively" rejected Israel's claims that the group was working against Israel and accused Israel of using these claims as rationalization for its decision.

"The TIPH, in which observers from Turkey have participated since it started operations in 1997, has made valuable contributions to easing the tension in Hebron under Israeli occupation," the ministry added.

The circumstances in Hebron leading to the establishment of the TIPH still exist, the ministry said.

"Within this context, it is clear that the termination of the TIPH does not end Israel's accountability or its obligations under international law, first and foremost from the Fourth Geneva Convention," it added, calling on the international community to guarantee Israel's compliance with these obligations.

The ministry said Turkey supports a two-state solution based on the 1967 borders between Israel and Palestine and "will continue to closely monitor the situation in Hebron with this understanding."

Palestinian officials labeled the move a "green light" for Israeli settlers in the city to carry out abuses.

He said Israeli settlers and soldiers had committed "40,000 attacks and violations against the Palestinian people in Hebron" since the TIPH was formed, without giving a source for the figure.

"Imagine what will they do without the presence of this force," he said.

Israel's decision to eject observers in Hebron may be a breach of the implementation of the Oslo accords, the Norwegian foreign minister said Tuesday.

"The one-sided Israeli decision can mean that the implementation of an important part of the Oslo accords is discontinued," Foreign Minister Ine Eriksen Soereide said in a statement to Reuters.

"The situation in Hebron is unstable and characterized by conflict," she said, adding that the end of the observer mission, which Norway has led for the past 22 years, was therefore "worrying."

Germany, Sweden and Italy also criticized Israel's decision not to renew the mandate.

"TIPH was part of an international framework to contain and solve the Middle East conflict, on which parties had agreed at the beginning of the Oslo process," Germany's Foreign Ministry said in a statement.

"Now this framework is breaking down, without having any other substitute," it said.

Berlin said it was worried about growing violence in Hebron, and urged all parties to do everything to prevent this from happening.

The Norway-led team is comprised of 64 observers tasked with promoting security for Palestinians in Hebron, the largest city in the West Bank.

Its mission was created after 29 Palestinian worshipers in a mosque were gunned down by an American-born Israeli settler.

Observers carry out daily patrols and document rights abuses they witness, although they are not allowed to intervene.

The mission reports its findings to its member countries -- Turkey, Italy, Norway, Sweden and Switzerland -- as well as the Israeli and Palestinian authorities.

Hebron is holy to both Muslims and Jews and has been a flashpoint in the Israeli-Palestinian conflict.

At least 600 Jewish settlers live under heavy military guard in the city, which is home to around 200,000 Palestinians.

Israeli settlements are seen as illegal under international law and a major obstacle to peace, as they are built on land the Palestinians see as part of their future state.