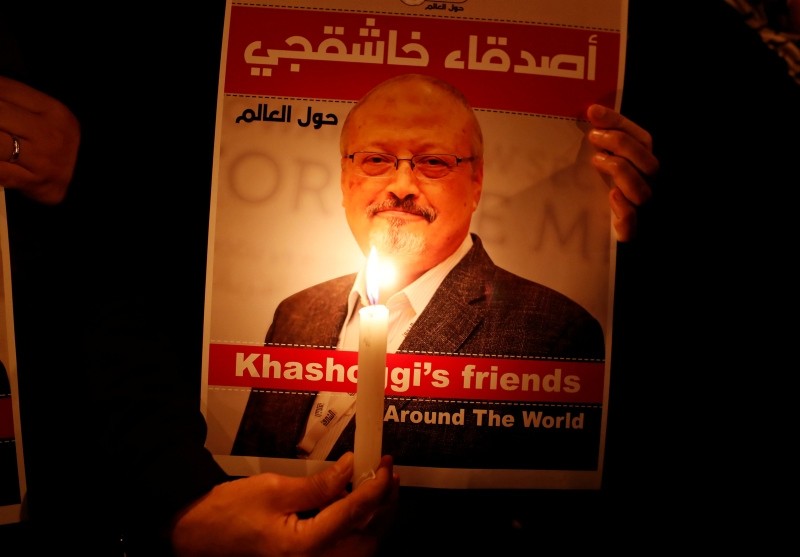 A demonstrator holds a poster with a picture of Saudi journalist Jamal Khashoggi outside the Saudi Arabia consulate in Istanbul, October 25, 2018. (REUTERS Photo)
by Feb 08, 2019 9:41 am

The "complete lack of transparency" from Saudi officials on the investigation into the murder of journalist Jamal Khashoggi is deeply concerning and detrimental to their credibility, the Turkish presidency's communications director said.

Khashoggi was killed and dismembered by a group of Saudi operatives in the country's consulate in Istanbul on Oct. 2, 2018. Initially denying and later downplaying the incident as an accidental killing in a fistfight, almost three weeks after the disappearance, Riyadh finally admitted that Khashoggi was murdered in a premeditated action, but denied any involvement by the royal family.

Speaking to Reuters, Fahrettin Altun said that the series of "false denials" from Saudi officials had led to uncertainty on a host of issues around the case.

"Over the past four months, the Saudi authorities have been less than forthcoming in their dealings with their Turkish counterparts and the international community," Altun said in a written statement.

"Saudi authorities must extradite Mr. Khashoggi's killers to Turkey, where they committed a premeditated murder, as proof of their willingness to serve the cause of justice."

Saudi Arabia has previously denied Turkey's extradition request for the 11 suspects, five of whom are facing the death penalty in Saudi Arabia.

On Thursday, a United Nations-led inquiry into the murder said evidence pointed to a brutal crime "planned and perpetrated" by Saudi officials, adding that Saudi officials had "seriously undermined" and delayed Turkey's investigation.

Despite Turkey's joint investigation with Saudi officials looking at the kingdom's consulate in Istanbul, the consul's residence and several other locations, the whereabouts of Khashoggi's remains are still unknown.

President Rcep Tayyip Erdoğan has said Khashoggi's killing was ordered by the highest level of Saudi leadership, but Riyadh has rejected accusations that the Crown Prince was involved.

Altun said Turkey's findings on the case were in line with those of the U.N.-led inquiry, adding that Ankara was committed to cooperating in a potential U.N. investigation into the case.

"The world is watching. Turkey, along with all nations that believe in democracy and freedom, seeks justice and the truth," he said.