'Hope for peace in Syria strongest ever' as Turkey, Russia, Iran meet in Sochi 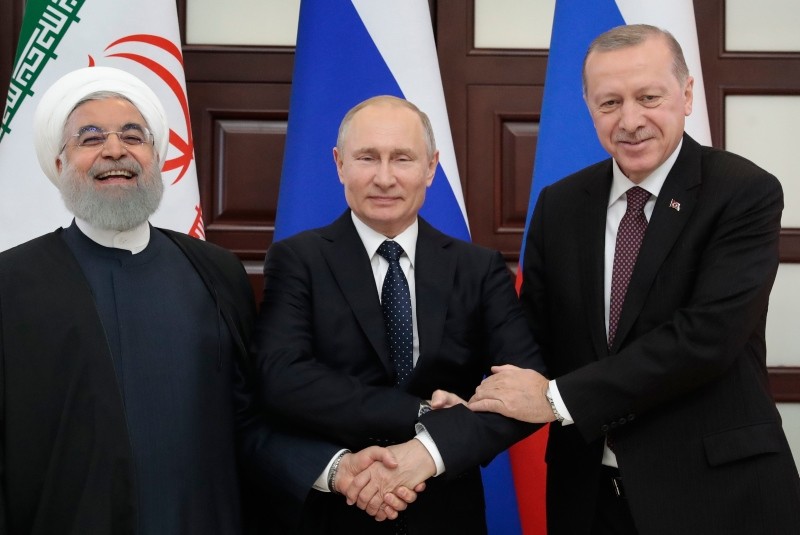 Presidents of Turkey, Russia and Iran met in Sochi late Thursday, expressing hope for Syria's future in a press conference.

"Hope for peace in Syria is at its strongest for first time," President Recep Tayyip Erdoğan said during the conference with his counterparts Vladimir Putin and Hassan Rouhani. "We have preserved the spirit of the Astana process despite all the problems and provocations," he added.

Russian President Vladimir Putin said that Russia, Turkey and Iran would jointly work to normalize life in Syria. "The Astana process would lead to a permanent political solution in Syria," he said, adding that close coordination at the summits have allowed the three countries to cooperate very effectively.

Iranian President Hassan Rouhani also praised the efforts of the three countries. He said that they would continue to reduce clashes and achieve greater stability in Syria through these meetings.

Regarding the next trilateral summit, Erdoğan said he hopes to host it in Turkey while Putin said they plan to hold late March or early April.

The first meeting of the Astana process was held in Turkey back in January 2017, with an aim to bring all warring parties in the Syrian conflict to the table. It would complement the U.N.-sponsored peace talks in Geneva.

A total of 11 rounds of talks have been held as of yet, leading to the establishment of four de-escalation zones in the northwestern province of Idlib, north of the central city of Homs, the Eastern Ghouta area outside Damascus and in the southern provinces of Deraa and Quneitra.

The partial cease-fire, however, was short-lived as regime forces, backed by Russia and Iran, recaptured three of the areas through heavy bombardments, leaving Idlib to be the last opposition stronghold.

A regime offensive in Idlib was prevented by Turkish and Russian intervention last year on Sept. 17, when both countries agreed to implement a demilitarized zone between the opposition forces and the regime forces warding off a possible humanitarian disaster.

"IDLIB SHOULD NOT SUFFER ANYMORE"

"Syrian people, particularly our brothers in Idlib, suffered a lot in the last eight years," Erdoğan said, regarding the latest developments in the region. He added that Turkey would continue to do its part to uphold the Idlib deal and called on the Syrian regime to honor the cease-fire.

"We do not want any more suffering in Idlib," he said.

Putin also acknowledged that they need to agree on lowering the tensions in Idlib.

CONSTITUTIONAL COMMITTEE TO BE FORMED SOON

Erdoğan said that the process of forming Syria's constitutional committee could be completed soon.

"We have never been this close to forming a constitutional committee in Syria. The process should be completed as soon as possible," he said.

Putin confirmed that the committee to draw up a new Syrian constitution would start its works soon, He added that the Astana guarantors are pushing for the formation.

The formation of the committee has been stalled for some time now due to the objections from the Bashar Assad regime since participants at a Russia-hosted conference in January 2018 agreed to establish it.

The returning of the refugees was another major topic that was discussed in the summit.

"Syrian people in Turkey long for returning home; they wait for the result of this trilateral meeting," Erdoğan said, highlighting that Turkey has done its best for Syrian people since the start of the war and provided $35 billion aid in every area.

Erdoğan also reminded the media of two previous operations of the Turkish military and saying that following these operations, until now, 310,000 refugees returned their homes. "We believe that this model can also be established east of Euphrates," he emphasized.

Returns increased in the past months after successive operations to end the Daesh terrorists' takeover of al-Bab, Jarablus and the clearing of Afrin of YPG terrorists in Operation Euphrates Shield and Operation Olive Branch in 2016 and early 2018, respectively.

"However," Erdoğan continued his speech, "we expect from the international community to share the burden [of refugees]." He expressed the disappointment of Turkey with international community, particularly the deal with the EU. He said that although the EU promised Turkey to pay $6 billion for refugees, they only paid a little more than half of it.

Rouhani also called on the international community to take concrete steps for the returning of the refugees.

"A few years ago it was not imaginable to think that Syrian refugees might return to their homes but now thanks to this cooperation they are really returning," he said.

"We are showing great efforts for Syrian refugees to return home. With our efforts, 1.5 million displaced people had the opportunity to return their homes," Putin said, praising three countries efforts.

He said that the safe zone should not be considered as an area that the terrorist organizations can act freely and even flourish.

"Turkey has previously said many times that it will not let any terror corridor be established within its borders. We expect our Astana partners to support any steps that we take for a safe zone," he underlined.

Last month, Erdoğan announced that Turkey will establish a safe zone in northern Syria along the length of its border with the assistance of the U.S.-led coalition forces.

"To protect Syria's territorial integrity, the terrorist YPG [the PKK's Syrian affiliate, the People's Protection Units] must be swept away from areas where it persists near the Turkish border," Erdoğan further said.

"Syria's territorial integrity will not be ensured unless the YPG terror group is cleared away from Manbij, [and] east of the Euphrates," he underlined.

Regarding Turkey's border security, Rouhani also said that they believe that the neighbor countries of Syria should also be safe, particularly Turkey.

"We all have to give importance to Turkey's safety," he said.

The meeting was the first one following U.S. decision to withdraw its troops from Syria, which was, thus, also another topic of discussion in the summit.

Erdoğan said that although he believes that Trump has made up his mind on the withdrawal, he doesn't believe other American officials share the same opinion.

He added that although they talk about different dates right now, there is nothing certain about the withdrawal process yet.

Rouhani, on the other hand, underlined that they, as Iran, are pessimistic about the process.

"Although the U.S. claims to leave the region, we are concerned that they will continue their intervention even after their withdrawal. They must leave so that the Syrians can decide their fate by themselves," he said.