US considers forming observation force in northern Syria after withdrawal 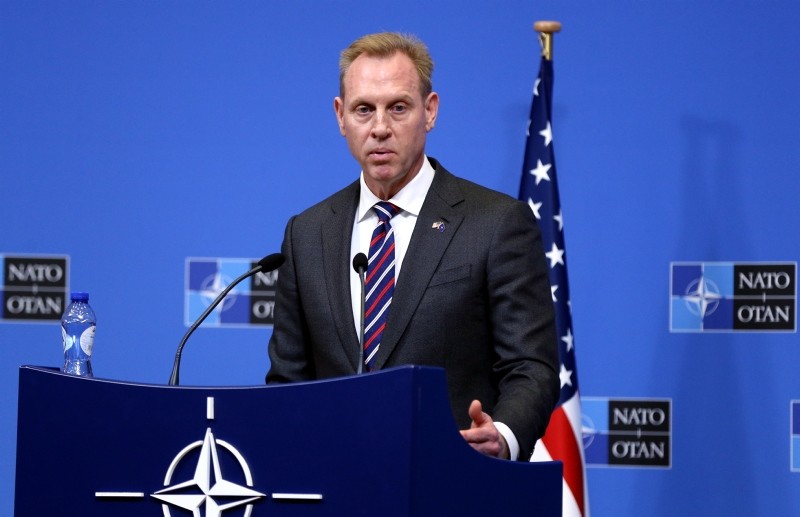 Washington has expressed its intention to establish an international observer force to take its place in northeastern Syria after the pending withdrawal of U.S. forces from the war-torn country.

Acting U.S. Secretary of Defense Patrick Shanahan told reporters during a two-day NATO defense ministers meeting in Brussels on Wednesday that the U.S. plans to secure the region with observers which will be monitored by the U.S.-led coalition forces. Shanahan hesitated to comment on whether U.S. troops would participate in the mission.

Stressing that they discussed how to ensure security and stability in northeastern Syria after the withdrawal, Shanahan said the presence of a new international coalition to combat the Daesh terrorist organization is an option. British Defense Minister Gavin Williamson also told reporters on Tuesday that the U.K. is ready to do "all that is required" to fight Daesh.

Trump's swift decision sparked the resignation of his former Defense Secretary James Mattis and has raised a range of criticisms. Trump's sudden decision prompted divergent voices and criticism suggesting that Daesh continues to be a threat, and it would be a betrayal to the U.S.' ally on the ground, the PKK-affiliated People's Protection Units (YPG), which Turkey sees as a national threat.

Ankara has long criticized the U.S. for working with the terrorist YPG to fight Daesh in Syria, saying that using one terror group to fight another makes no sense.

Turkey and the Free Syrian Army (FSA) have long been trying to stabilize northern Syrian territories liberated from Daesh and YPG terrorists. However, there have been ongoing attempts by the YPG to undermine efforts to return life to normal in the region. On Wednesday, the FSA captured four members of the Daesh terror organization who were released by the YPG in northwestern Syria's Afrin.

According to information obtained from local sources, Daesh members were trying to head to the northern Syrian province of Idlib from eastern Syria's Deir el-Zour, Yusuf Hammud, the spokesman of the National Army, which was formed under the umbrella of the FSA, said Tuesday. "The terrorist organization has come to our region in a comfortable way through regions occupied by the YPG. As it is obvious, the YPG oils the wheels for Daesh.

The YPG provides the guarantee to Daesh for a secure transition to Idlib province in exchange for surrender and the return of imprisoned YPG militants. However, opposition groups in Idlib often stress that they do not want Daesh militants in the province, indicating that they are ready to fight in a bid to defend their lands.

On the issue, Naci Mustafa, a spokesman of the National Liberation Front under the umbrella of the FSA, said that the agreement between the YPG and Daesh for a secure transition to Idlib is a part of a plan formulated by Bashar Assad to spread terror to Idlib.

Emphasizing that they regard the Bashar Assad regime as "the main source, inventor and supporter" of the Daesh and YPG terrorist organizations, Mustafa said the regime is creating a false perception to claim it is fighting these terror groups. "With this agreement, the regime wants to spread terrorism from Deir el-Zour to Idlib, but security forces and opposition groups have kept the measures at the highest level since last year. We are ready to fight them if they somehow provide a safe corridor to reach the contact points of the opposition groups."

However, since some Arab-origin Daesh terrorists want to move to Iraq leads to a conflict between the two terrorist organizations. While the YPG has decided to adopt a clear stance on the transition to Iraq, alternatively, it proposes a transition to the desert areas of Syria's Homs province.

Commenting on the atrocities and oppression of the terrorist organization, Iraqi Prime Minister Adel Abdul-Mahdi told reporters late Tuesday that Iraq would repatriate Iraqi-oriented Daesh members held by the YPG in Syria as well as thousands of their family members.

Abdul-Mahdi's comments came after a meeting held in Iraqi capital Baghdad with Shanahan. A senior Iraqi intelligence official said almost 20,000 Iraqis, including Daesh militants, their families and refugees, will be brought back to the country by April where many of them will live in a tent settlement in western Anbar province.

A week before the announcement, the U.S. called on other nations to repatriate and prosecute their citizens who traveled to Syria to fight with Daesh and who are now being held by the U.S. backed-YPG.

Meanwhile, the PKK continues to engage in illegal arms trade in the Iraqi and Syrian border regions.

"The PKK is engaged in heavy and light arms trade with Iraq and border regions of Syria," Muzahim Ahmad Al-Huveyt, a spokesman for Arab tribes in Iraq's Mosul province said Wednesday, recalling that terror groups also ply mine and ammunition trade in the same region.

Referring to the activities of the organization in Iraq's northwestern Sinjar, Huveyt said, "The PKK forcibly sends off young people to Syria, who were kidnapped in Sinjar."

Mehma Halil, the governor of Sinjar district, said that the PKK is also engaged in the drug and medical supplies trade, adding the locals are also exposed to racketeering to provide financial aid for the terror group's militants located in Syria.