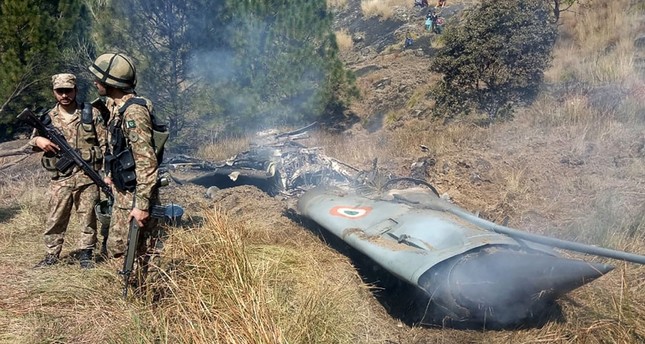 Pakistani soldiers stand next to the wreckage of an Indian fighter jet shot down in Pakistan-controlled Kashmir at Somani area in Bhimbar district near the Line of Control on Feb. 27, 2019. (Photo by STR / AFP)

According to a statement from the Pakistani prime ministry, Erdoğan expressed appreciation for Imran Khan's move to release a captured Indian fighter pilot that had entered Pakistani airspace on Wednesday.

The statement added that Khan had thanked Erdoğan for his "constant support for Pakistan and the Kashmiri people."

Khan had said earlier that Thursday that he would call Erdoğan, seeking his help in lowering tensions with neighboring India after a flare-up fueled fears of conflict between the nuclear-armed rivals.

"I am going to talk to President Erdoğan, and I will request him to play his role in this connection," Khan told a joint session of the parliament summoned after both countries claimed to have shot down each other's jets.

In his address to the parliament, Khan said his country wants peace and this should not be considered a weakness, adding that he had attempted to contact Indian Prime Minister Narendra Modi on Wednesday to call for de-escalation.

Foreign Minister Shah Mehmood Qureshi, meanwhile, will hold talks with other world leaders regarding the current situation. He also said he has been in constant contact with his Turkish counterpart Mevlüt Çavuşoğlu, state-run Radio Pakistan reported.

Earlier, Khan told the parliament that Pakistan will release a captured Indian pilot on Friday in an overture toward New Delhi.

"As a peace gesture we are releasing the Indian pilot tomorrow," Khan said, a day after Wing Commander Abhinandan Varthaman was shot down in a rare aerial engagement between the South Asian neighbors over the disputed region of Kashmir.

He was arrested after Pakistani forces claimed to have downed two Indian jets who had entered their territory. India denied the claim saying it has downed one Pakistani jet on Wednesday and in the process lost one of their own jets.

Qureshi previously said Pakistan would be prepared to return the Indian pilot shot down and captured this week if it helped ease the crisis with its neighbor.

"We are willing to return the captured Indian pilot if it leads to de-escalation," he was quoted as saying in an interview with the Pakistani television station Geo TV on Thursday.

The incident was the latest in a dangerous sequence of events between the two countries that have sent tensions rocketing, as major world powers including China, the U.S. and the U.N. urged restraint.

It sparked fears of India and Pakistan -- who have fought two wars and countless deadly skirmishes over Kashmir -- entering a cycle of retaliation and counterattacks that could spiral out of control.

Varthaman, who rapidly attained hero status in his own country, has become the face of the escalating conflict, with analysts touting him as a potential trump card for Islamabad and perhaps the key to bringing the arch-rivals back from the brink.

"Khan is ready, for the sake of peace ... is Modi ready as well?" the minister said.

He also said the Saudi foreign minister was expected to visit Pakistan with a special message from Crown Prince Mohammed Bin Salman, who visited both Pakistan and India earlier this month.

Pakistan's foreign ministry also said that India has handed over its file on deadly Kashmir bombing, a sign of easing tensions.

The Feb. 14 suicide bombing targeted Indian paramilitary forces in the Indian-controlled Kashmir, killing 40 troops and leading to a dramatic escalation between India and Pakistan.

The ministry's spokesman, Mohammad Faisal, says the Pakistani side will be examining the "dossier" that Islamabad received through diplomatic channels on Thursday. He refused to provide details about the information that New Delhi has shared.

Pakistan also has said it will act against those linked to the Kashmir bombing if actionable intelligence is shared with it.

Khan dubbed the lingering Kashmir dispute was the bone of contention between the two countries and underlined the need to address it.

"Shouldn't they [India] be asking why a 19-year-old agreed to become a human bomb? Why Kashmiri youths have lost fear for death?" he said, referring to a Jaish-e-Mohammad (JEM) suicide bomber who claimed to have carried the attack.

Pakistan, which has banned JEM since 2002 but is accused by India of providing the group a sanctuary, denied the claim saying the Indian jets had dropped bombs at empty forestland.