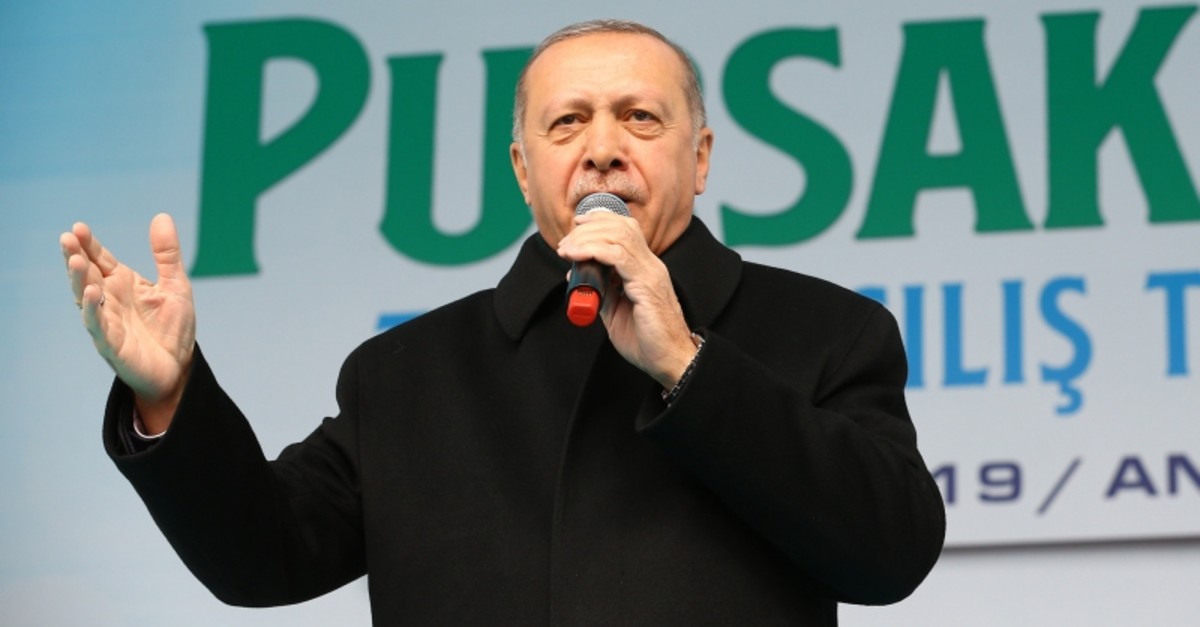 President Recep Tayyip Erdoğan slammed Wednesday Israeli Prime Minister Benjamin Netanyahu for his remarks on social media targeting himself, saying that Turkey will resume its efforts to secure the rights of the Palestinian people and the status of Jerusalem.

"Instead of preventing the oppression of Muslims, Israel's prime minister [Benjamin Netanyahu] is targeting me as sort of an 'investment' for the upcoming elections (on April 9). We will not answer to these social media bouncers," Erdoğan said at an election rally in Ankara's Pursaklar district, calling Netanyahu an "oppressor" and a "murderer of children."

"We will continue our fight for the rights of Palestinians and the administration of Jerusalem in line with the weight it carries for the Muslim world until our last breath," he added.

The complex — and mostly sour — relations between the longtime Turkish and Israeli leaders were once again strained as Netanyahu called Erdoğan a "dictator" in a tweet on his official account Tuesday.

Both countries are heading to polls, with Turkey's local elections slated for March 31 and Israel's snap general elections scheduled for April 9.

"Insanity is doing the same thing over and over again and expecting different results," Fahrettin Altun said on Twitter in response to Netanyahu.

He was referring to a well-known quote by renowned scientist Albert Einstein, adding a video showing a spat between Erdoğan and Israeli then-president Shimon Peres at a Davos Summit held in 2009, an incident widely known as the "one-minute incident" by the Turkish public.

"The apartheid state he leads occupies Palestinian lands, kills women, children, and imprisons Palestinians in their own land," Kalın said.

"Lies and pressure will not hide your crimes," he added.

On Tuesday, Kalın condemned Netanyahu's affirmation of Israel as the nation-state of Jewish people.

"I strongly condemn this blatant racism and discrimination. 1.6 million Arabs/Muslims live in Israel. Will the Western governments react or keep silent under pressure again?" Kalın said on Twitter.

On March 12, Netanyahu said Israel is "a nation state not of all its citizens but only of the Jewish people."