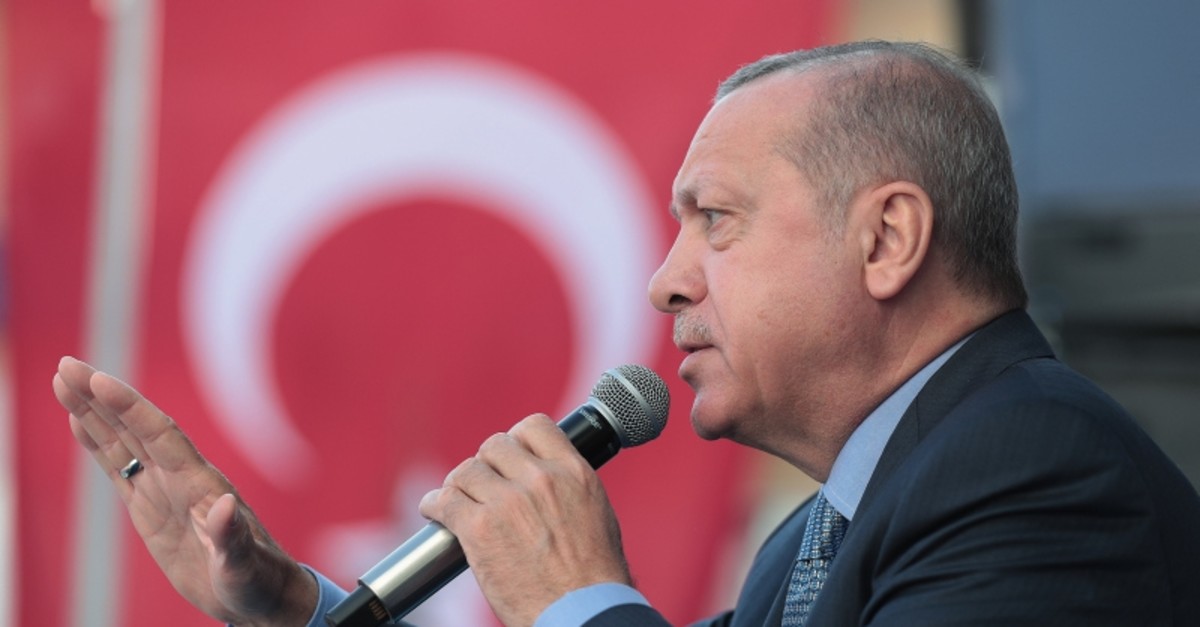 President Recep Tayyip Erdoğan strongly condemned the "deplorable" terror attacks on two mosques in New Zealand's Christchurch, saying it was the "latest example of rising racism and Islamophobia," while offering his condolences to the Islamic world and the people of New Zealand.

"I strongly condemn the terror attack against the Al Noor Mosque in New Zealand and Muslim worshipers. May Allah have mercy on the victims and grant a speedy recovery to the wounded," the president said in a series of tweets.

Speaking at a funeral ceremony in Istanbul later in the day, Erdoğan said: "With these attacks (in Christchurch), anti-Muslim sentiment — behavior the world chooses to sit back and watch, and even encourages — has gone beyond personal hatred and abuse and turned into massacre."

The Turkish president said it was obvious that the shootings were a result of long planning and motivation and could not be brushed off simply as "impulsive behavior."

He added that this homicidal tendency, which was also attacking Turkey and him, was spreading across the West "like cancer."

Erdoğan is also sending Foreign Minister Mevlüt Çavuşoğlu to New Zealand to convey Turkey's condolences and "to emphasize our common resolve against Islamophobia and xenophobia and to highlight our solidarity with New Zealand in the face of these heinous terror attacks," according to a press release.

Later, speaking at a public event, Erdoğan said that he won't let these type of terrorists reach their targets while pointing at the bad intentions of the murderer against Muslims.

"I consider revealing organizations behind this terrorist is also an important step for your nation. The manifesto revealed by the attacker puts it clearly that this attack is not an individual one. I believe revealing the groups behind this attack will also put at ease the nation of New Zealand. We wouldn't want a shadow cast on New Zealand, the country of liberties," Erdoğan told Reddy.

The five parties in Turkey's parliament issued a joint declaration on Friday evening condemning the attack, calling for joint action against terrorism.

The deadly attacks were the "result of racism based on Islamophobic and xenophobic hate speech," said the declaration signed by the deputy group chairs of the parties.

The Western world should "avoid encouraging the actions of Islamophobic tendencies," it added.

"The Western governments and media should wholeheartedly and categorically steer clear of rhetoric that provoke Islamophobic emotions and actions," warned the declaration.

Other statements of condemnation from Turkish officials also came pouring in shortly after the attack.

Foreign Minister Çavuşoğlu condemned the attack on Twitter, saying: "Not only the perpetrators, but also politicians & media, that fuel the already-escalated Islamophobia and hate in the West, are equally responsible for this heinous attack."

Çavuşoğlu later spoke to his New Zealander counterpart Winston Peters to offer his condolences and share his message of solidarity.

A statement released by the Foreign Ministry also underlined that Turkey believes that New Zealand will carry out an effective investigation into the attacks, understood to be motivated by Islamophobia, and bring the perpetrators to justice as soon as possible.

The Turkish Presidency's Communications Director Fahrettin Altun said these terror attacks served as "a reminder that a house divided cannot stand: it is time to unite against all forms of terrorism."

"This cowardly act shows how anti-Muslim rhetoric and hatred leads to murderous acts," and the point Islamophobia and Muslim hostility has reached in the world, he said.

Underlining that many incidents have proved that Islamophobic rhetoric against Islam and Muslims has turned into "a perverse and murderous ideology," Kalın called on the world to break its silence over Islamophobic hatred.

Main opposition the Republican People's Party (CHP) Chairman Kemal Kılıçdaroğlu said a great crime of terror had been committed against humanity in New Zealand with the attacks.

"We don't accept despair in the face of Islamophobia or growing hate speech; we call on Western countries to do their homework in that regard and urge Islamic countries to end conflict among themselves to live in peace," Kılıçdaroğlu said on Twitter.

Devlet Bahçeli, the leader of the Nationalist Movement Party (MHP), said that New Zealand's government is responsible for punishing terrorists who targeted Islamic values. Emphasizing that the terrorist was hostile to Turks and Turkey, "Enemies of Turks and Islam know no limits in barbarism."

Ali Erbaş, head of the Presidency of Religious Affairs, defined Islamophobia as a "serious crime against humanity" and condemned violent attacks targeting mosques which are "venues symbolizing peace for all humans."

Prime Minister Jacinda Ardern said the mass shootings at two mosques appeared to have been a well-planned "terrorist attack", leaving 40 people killed and more than 20 seriously injured. The death toll later rose to 49.

A man who claimed responsibility for the attack said he was a 28-year-old Australian and described anti-immigrant and anti-Muslim motives in a manifesto.

Police earlier said four people were taken into custody, and one has been identified as Australian.