US decision on Golan Heights to engulf region in new crisis 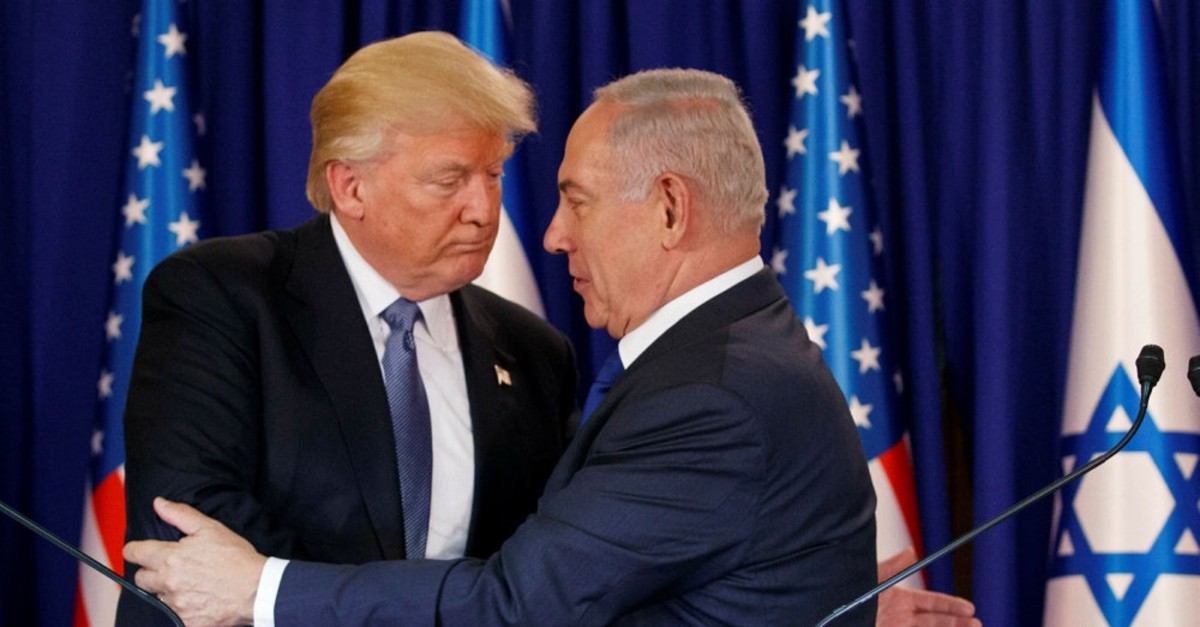 U.S. President Donald Trump has suggested recognizing Israel's sovereignty over the Golan Heights, leaving the international community concerned that tensions over the zone are likely to increase

U.S. recognition of occupied Golan Heights as part of Israel has become latest example of Washington's blind support to Tel Aviv and will likely stoke tensions in the already tense zone. "After 52 years it is time for the United States to fully recognize Israel's Sovereignty over the Golan Heights, which is of critical strategic and security importance to the State of Israel and Regional Stability!" U.S. President Donald Trump said on Twitter on Thursday. His comments received a staunch backlash from the international community, which highlights violation of international law and the possible destabilizing effect of the decision in the region.

President Recep Tayyip Erdoğan said on Friday that Trump's "unfortunate remarks" recognizing Israel's sovereignty over the Golan Heights have brought the region to the brink of a new crisis.

"We cannot allow the legitimization of the occupation of the Golan Heights," Erdoğan said at the emergency Organisation of Islamic Cooperation (OIC) meeting in Istanbul.

Foreign Minister Mevlüt Çavuşoğlu on Thursday also emphasized the fundamental importance of states' territorial integrity under international law. "Attempts by the U.S. to legitimize Israel's actions against international law will only lead to more violence and pain in the region," Çavuşoğlu wrote in a tweet.

Israel seized roughly two-thirds of the wider Golan Heights area from Syria after defeating an Arab coalition in the 1967 Six-Day War, occupying the territory as a de facto result since then. It formally annexed the Golan Heights in 1981; however, the action was unanimously rejected by the U.N. Security Council and international community. Security Council resolution 497, issued after the annexation, refers to Israel as "the occupying power" and says Israel's attempt to "impose its laws, jurisdiction and administration in the occupied Syrian Golan Heights is null and void and without international legal effect." Syria and Israel had talks several times for a peace deal that included return of the territory to Damascus but negotiations eventually collapsed. The decision drew criticism from both the European Union and the Arab League. The EU underlined Friday that it does not recognize Israel's sovereignty over the territories occupied by Israel since June 1967, including the Golan Heights, and does not consider them to be part of Israel's territory in line with international law. Arab League chief Ahmed Aboul Gheit criticized the U.S. stance, saying it "comes outside international legitimacy, and no country, no matter how important it is, can make such a decision." The French Foreign Ministry said yesterday that France does not recognize the Israeli annexation of the Golan Heights and its recognition, following U.S. President Donald Trump's call to fully recognize Israel's sovereignty over the Golan Heights.

"The recognition of Israeli sovereignty over the Golan, occupied territory, would be contrary to international law, in particular the obligation for states not to recognize an illegal situation," the ministry said in a daily briefing.

Since U.N. Security Council resolutions recognize the annexation as null and void, the ministry said: "The Golan is a territory occupied by Israel since 1967. France does not recognize the Israeli annexation of 1981."

Russia's Foreign Ministry spokeswoman Maria Zakharova said on Friday that a change in the status of the Golan Heights would be a direct violation of U.N. decisions. Germany, Iran and Egypt also declared that they do not recognize Israel's authority over the Golan Heights.

Trump's comments come as U.S. Secretary of State Mike Pompeo is in Israel and a week ahead of Israeli Prime Minister Benjamin Netanyahu's visit to Washington to visit the White House and address the American Israel Public Affairs Committee (AIPAC) lobby's annual meeting.

It also reflects the overt backing by U.S. administration for Netanyahu, who continues his campaign in Israel for the April 9 election, but afflicted by a series of corruption allegations and facing a tough challenge from the party of popular former military chief Benny Gantz. Minutes after Trump's announcement, Netanyahu expressed his appreciation on Twitter: "At a time when Iran seeks to use Syria as a platform to destroy Israel, President Trump boldly recognizes Israeli sovereignty over the Golan Heights. Thank you President Trump!"

Speaking to Daily Sabah, Hüsamettin İnaç, the chairman of Dumlupınar University's Department of Political Science and International Relations, said that the decision and timing reflects Trump's close alliance with Netanyahu and his desire to help him secure his victory. "After the beginning of the Syrian civil war, countries started to express their position in the world order more clearly," he said.

It becomes the second example of a drastic foreign policy change by Washington in favor of Israel. In December 2017, Trump recognized Jerusalem as the capital of Israel, despite Palestinian claims on the eastern part of the city and breaking with longstanding U.S. policy. Following the decision, the U.N. General Assembly overwhelmingly passed a resolution asking the U.S. to withdraw its decision.

Israel has been seeking to maintain its grip on the Golan Heights mainly due to its geostrategic significance due to water sources and physical location. The country gets about one third of its total water needs from the Golan Heights and the Jordan River passing nearby. It is also one of the highest points in the region and located only 60 kilometers from Damascus; it also borders Lebanon and Jordan.

The area is also referred to in the Holy Scriptures of the Jewish people, who consider the Golan Heights to be holy.

İnaç said that in order to maintain its total control over the area, the location of the Golan Heights is extremely crucial for Israel. "It is the highest point in the region and gives anybody who controls it a significant military advantage," he said.