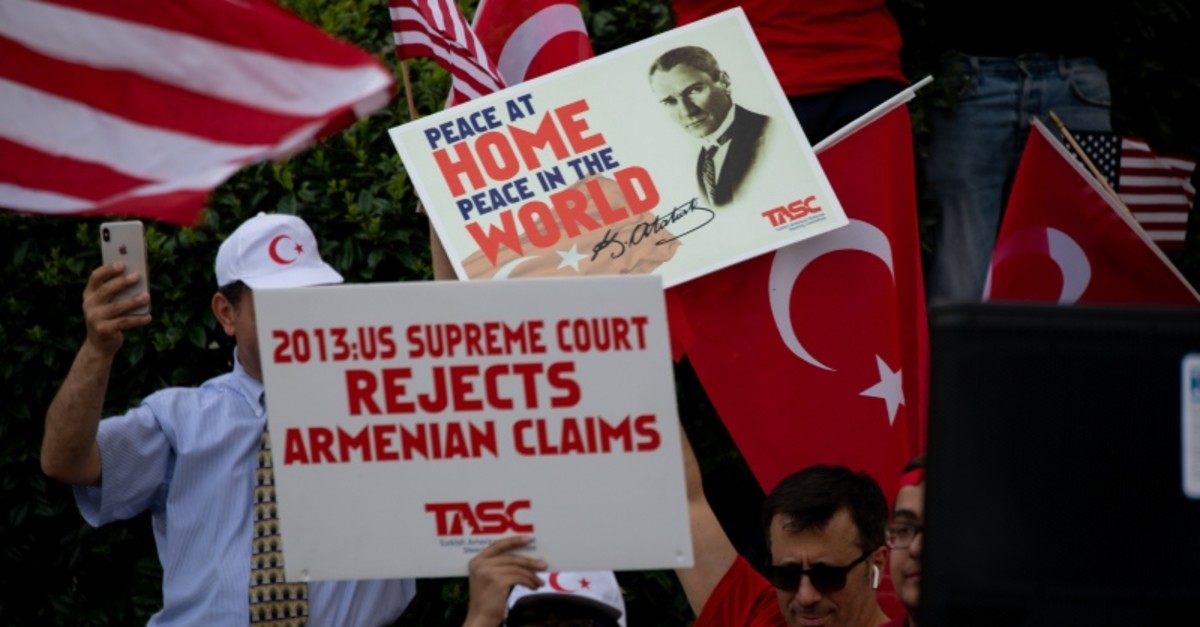 Turkish and Armenian communities living in the U.S. held demonstrations and counter-demonstrations Wednesday in Washington D.C. and Los Angeles to mark the 104th anniversary of the 1915 events and to protest genocide allegations.

he Turkish embassy's residence in Washington D.C. was the main scene where opposing protester groups were located. In a counter-demonstration organized by the Turkish-American Steering Committee (TASC), hundreds of Turkish Americans waved Turkish flags and displayed posters reading "We remember victims of Armenian terror", "Armenia, open your archives! What are you hiding?" and "Stop Armenian aggression in Azerbaijan." 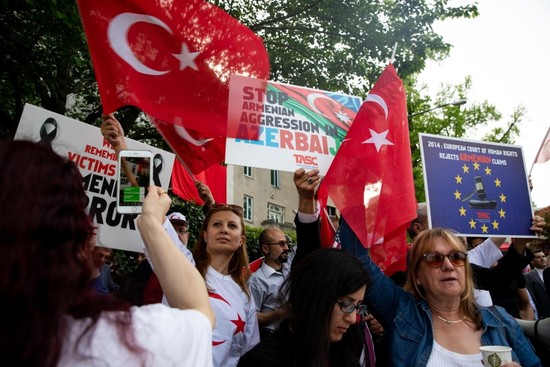 A large group of Armenians also held banners and chanted against Turkey over the so-called "Armenian genocide." During the demonstrations, which ended without a incident under intense security, D.C. Metropolitan Police and secret service officers had to warn some demonstrators to stay in their designated areas.

The names of Turkish diplomats assassinated by Armenian terrorist groups, including the left-wing and Soviet-backed Armenian Secret Army for the Liberation of Armenia (ASALA) and the right-wing Armenian Revolutionary Army (ARA, previously known as the Justice Commandos for the Armenian Genocide - JCAG) in the 1970s and 1980s across the world were also read out.

Cihangir Aktaş, a Turkish student from Boston, came to Washington D.C. to join the demonstration. He said he was against Armenia's lies.

"I am here to show solidarity," he told Anadolu Agency.

Crowds of Armenian Americans also marched Wednesday in Los Angeles, where the largest Armenian population in the U.S. and one the world's largest Armenian communities outside of Armenia is located. The march has become a major event which includes a protest outside the Turkish Consulate. 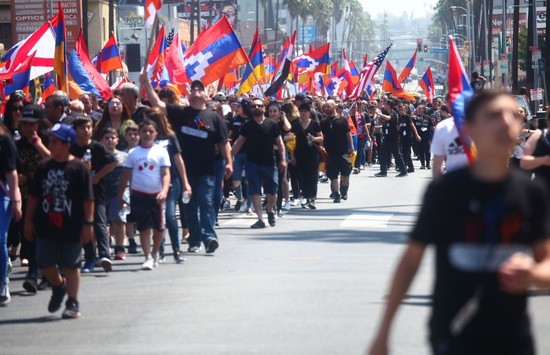 Armenians, Armenian descendants and supporters walk during the march and rally on April 24, 2019 in Hollywood, California. (Mario Tama/Getty Images/AFP)

One of the community's most famous members, Kim Kardashian West, tweeted: "We made a promise we would never forget the Armenian genocide."

Turks also held a counter-protest near the consulate, where two Turkish diplomats — Consul General Mehmet Baydar and his aide Bahadır Demir — were assassinated on Jan. 27, 1973 by Gourgen Yanikian, an Armenian with roots from Anatolia and a survivor of 1915 events. This assassination became the inspiration for ASALA and ARA, which killed more than 30 Turkish diplomats and consular staff in the decade to come, in addition to attacks targeting civilians and businesses, including the 1982 Ankara Esenboğa Airport attack killing nine people and the 1983 Paris Orly Airport attack killing eight. 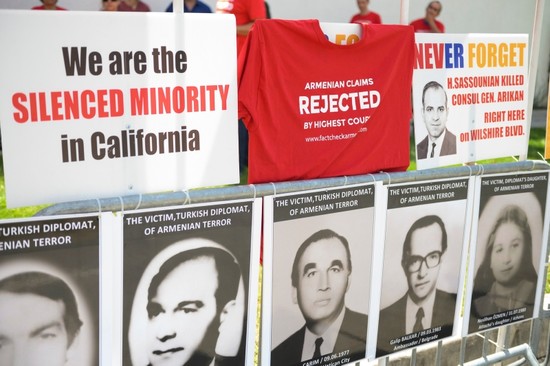 Turks display the photos of diplomats assassinated by Armenian militant groups during a counter-protest in front of the Turkish consulate in Los Angeles, April 24, 2019. (IHA Photo)

Kemal Arıkan, Turkey's consul general to Los Angeles, was also assassinated on Jan. 28, 1982 by ARA militant Harry "Hampig" Sassounian, who was sentenced to life imprisonment but on parole by a board in the U.S. state of California, where the Armenian community has a significant political influence.

In Sacramento, California Gov. Gavin Newsom issued a proclamation declaring "A day of remembrance of the Armenian Genocide."

"Today and every day, let us recommit ourselves to making certain that we never forget the Armenian Genocide, and that we always speak out against hatred and atrocities anywhere they occur," it said.

U.S. Rep. Adam Schiff, a Democrat whose district encompasses much of the Armenian community, said in a statement that there is no debate that it was genocide and he faulted U.S. presidents from both parties for stopping short of using the term.

"The denial of the genocide is an enduring wound to the Armenian people who descended from survivors to build lives here in the United States, in Armenia, and around the world," Schiff wrote.

Successive U.S. presidents have refrained from calling the deaths of Armenians "genocide," but former President Barack Obama adopted the Armenian phrase "Meds Yeghern," or "Great Crime," to describe the tragedy, a practice repeated by Donald Trump.

"We welcome the efforts of Armenians and Turks to acknowledge and reckon with their painful history," Trump said in a statement released Wednesday. "And we stand with the Armenian people in recalling the lives lost during the Meds Yeghern and reaffirm our commitment to a more peaceful world."

The Turkish Foreign Ministry rejected Trump's statement, saying his "null and void" statement was based on the subjective narrative fictionalized by Armenians and had no value, urging Trump to be fair in his judgments.

The Armenian National Committee of America (ANCA) was also unhappy with the statement, accusing Trump of prioritizing Turkey and backing Turkey's policies.

Turkey's position on the events of 1915 is that the deaths of Armenians in eastern Anatolia took place when some sided with invading Russians and revolted against Ottoman forces. A subsequent relocation of Armenians resulted in numerous casualties, added by massacres from militaries and militia groups of both sides. Historians siding with Armenian claims argue that some 1.5 million Armenians perished during this period, whereas Turkish historians say that this number is highly inflated and more than 500,000 Muslims were slaughtered by Armenian rebel groups during the same period.

Turkey objects the presentation of the incidents as "genocide" but describes the 1915 events as a tragedy in which both sides suffered casualties.

The mass arrests of prominent Ottoman Armenian politicians, intellectuals, clergymen and other community members suspected of links to separatist groups, harboring nationalist sentiments and being hostile to the Ottoman rule were rounded up in then-capital Istanbul on April 24, 1915 is commemorated by Armenians as the beginning of later atrocities.