Turkey expects concrete steps from US on YPG: MFA spox 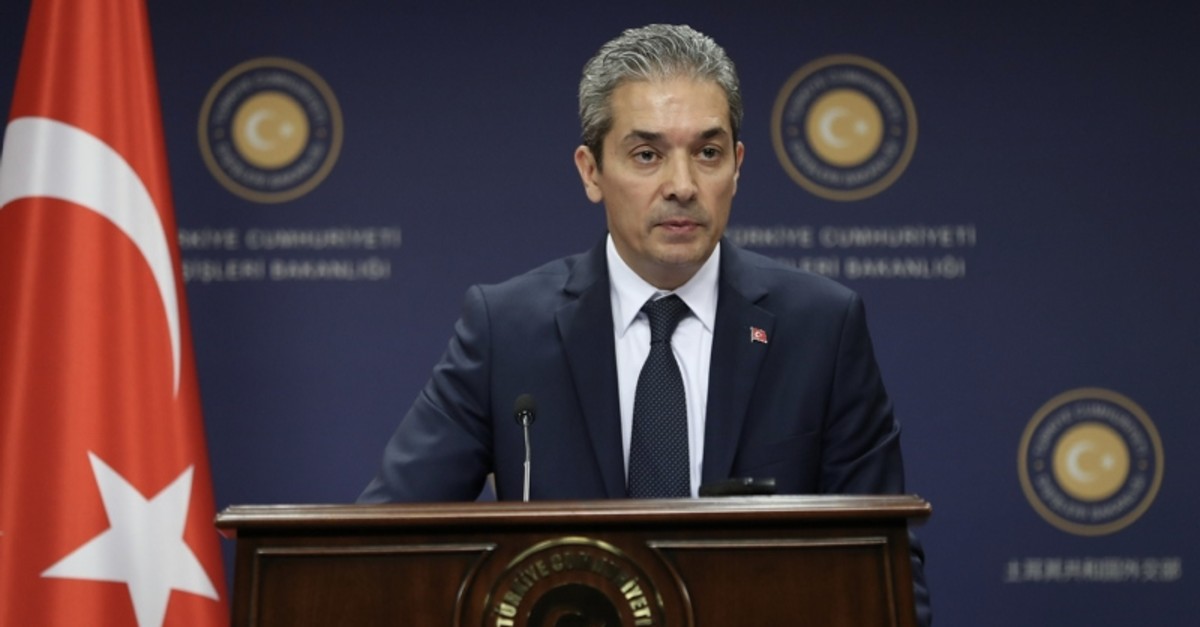 The U.S. has been a party to the combat in Syria since 2014 with the initial aim of supporting the opposition with non-lethal aid against the Syrian regime along with France, the U.K. and Canada. Within this context, the country initiated the "train-and-equip" program. However, Washington's support swiftly changed into armed support for the YPG by the Obama administration under the pretext of fighting Daesh. Ankara has objected to the decision since, saying that partnering with one terrorist group to fight another is illogical and opens opportunities for new terrorist organizations to flourish in the country.

The spokesman reiterated that a planned safe zone near the Syria-Turkey border needed to be controlled by Turkey, and wanted it to be 32-kilometers deep into Syria's territory.

Washington on Monday said it will not renew exemptions granted last year to buyers of Iranian oil, including Turkey, and it demanded that buyers stop purchases by May 1 or face sanctions.

The decision was more stringent than expected, and caught several key importers who have been pleading with Washington to continue buying Iranian oil sanctions-free.

Aksoy also said that Turkey is a part F-35 program and Turkish officials have been telling their U.S. counterparts in meetings of every level that linking this issue to Turkey's S-400 missile defense systems purchase from Russia was not correct. "We carry out our payments regularly, our pilots are receiving training there and we will not back down from this.," Aksoy said.

Regarding U.S. Vice President Mike Pence's remarks about Turkey on the sidelines of the NATO summit in Washington earlier this month, Aksoy said: "We see that the U.S. administration has restarted the use of threatening language but we've seen it before it does not work."

Pence had said Turkey's purchase of the Russian S-400 defense systems could potentially pose a risk to NATO.

"Turkey must choose. Does it want to remain a critical partner in the most successful military alliance in the history of the world, or does it want to risk the security of that partnership?" Pence said.

Aksoy said: "It is impossible to accept this expression regarding our country. The U.S. should understand that it will not get any result through impositions."

Tensions between the U.S. and Turkey have reached a fever pitch in recent months with Turkey set to begin receiving the advanced S-400 Russian surface-to-air missile system that Washington said will jeopardize Turkey's role in the F-35 fighter jet program and which could trigger congressional sanctions.

Aksoy also criticized French President Emmanuel Macron for his decision to declare April 24 as the day to commemorate the so-called "Armenian Genocide."

"The administration in France is not aware of the gravity of this step. France bears responsibility in the massacres against Turks by arming Armenians. They are after building up an agenda through Armenians," Aksoy said.

The spokesman said archives of the Armenian side had not been revealed completely, contrary to Armenian claims.

"If Armenians actually show the courage to reveal the archives, the truth will be out. Unfortunately, they continue misleading the world and the young generation," he said.

Responding to recent remarks by French Prime Minister Edouard Philippe against Turkey regarding the events, Aksoy said: "I would like to point out that this attitude, which does not suit the head of an ally country, will not remain unanswered."

Turkey's position on the events of 1915 is that the deaths of Armenians in eastern Anatolia took place when some sided with invading Russians and revolted against Ottoman forces. A subsequent relocation of Armenians resulted in numerous casualties, added by massacres from militaries and militia groups of both sides. Historians siding with Armenian claims argue that some 1.5 million Armenians perished during this period, whereas Turkish historians say that this number is highly inflated and more than 500,000 Muslims were slaughtered by Armenian rebel groups during the same period.

Turkey objects the presentation of the incidents as "genocide" but describes the 1915 events as a tragedy in which both sides suffered casualties.

The mass arrests of prominent Ottoman Armenian politicians, intellectuals, clergymen and other community members suspected of links to separatist groups, harboring nationalist sentiments and being hostile to the Ottoman rule were rounded up in then-capital Istanbul on April 24, 1915 is commemorated by Armenians as the beginning of later atrocities.