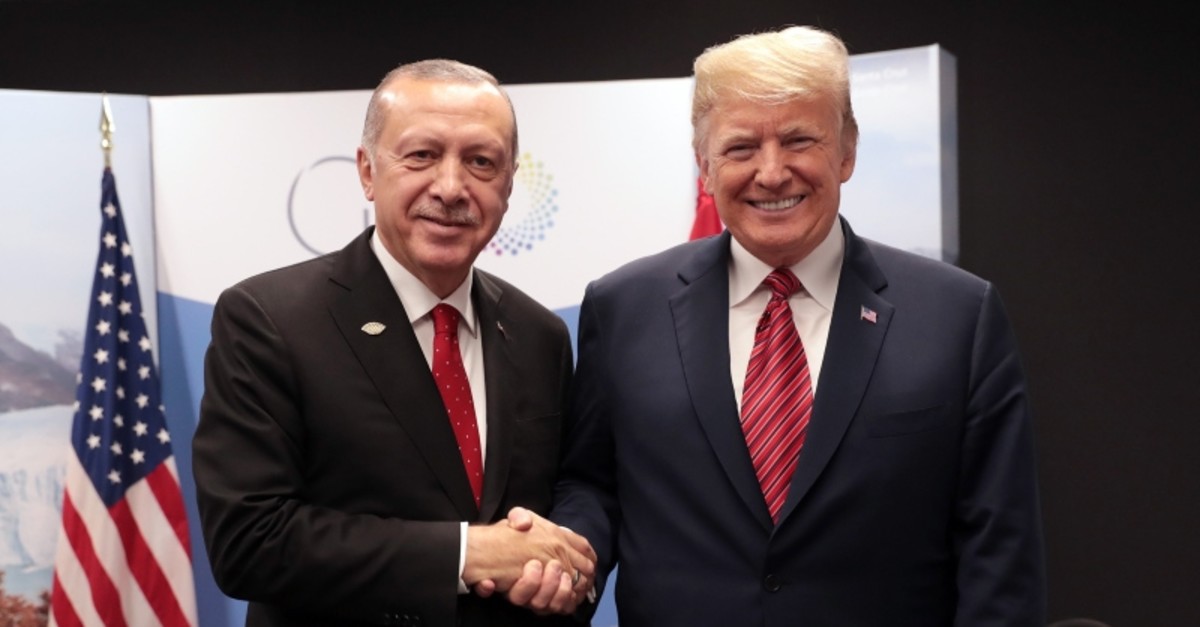 The two leaders exchanged views on recent developments in Syria and agreed to cooperate closely in the fight against terrorism, the Turkish presidency said in a statement.

The U.S. and Turkey are reportedly negotiating a plan to jointly patrol a 32-kilometer-deep safe zone in northern Syria along the Turkish-Syrian border.

In December last year, Trump announced that Washington would pull its troops out of Syria, saying that Daesh was defeated. The withdrawal decision was quickly interpreted as a sign of the end of U.S. support for the PKK-affiliated People's Protection Units (YPG), which Turkey sees as a terrorist organization. Yet, in the face of mounting hints that the country will maintain its support for the terrorist organization and contradictory statements from officials on the withdrawal process, Erdoğan and Trump began discussing setting up a 32-kilometer safe zone to ease Turkey's security concerns.

Erdoğan and Trump also reaffirmed their commitment to increase bilateral trade between both countries to $75 billion annually, and discussed steps to be taken toward reaching that goal. Turkey's Trade Ministry and the U.S. Department of Commerce recently established working groups to accomplish the trade goals following the visit of a large Turkish delegation composed of ministers and businesspeople this month.

The presidency said Erdoğan once again proposed forming a joint technical group regarding Turkey's pending procurement of the S-400 defense system from Russia, which has become a major point of contention between Washington and Ankara.

Recently, Turkey offered the U.S. the option of forming a working group of experts to determine whether the S-400s posed a threat to the F-35 stealth fighter jets. While Washington has positively responded to Turkey's proposal to form a joint working group to ease concerns over its purchase of the Russian-made S-400 missile systems, Ankara still hasn't received word from the U.S. on the matter.

Tensions between the U.S. and Turkey reached a fever pitch in recent months with Turkey set to begin receiving the advanced S-400 Russian surface-to-air missile system which the U.S. says will jeopardize Turkey's role in the F-35 fighter jet program and which could trigger congressional sanctions including Turkey's removal from the F-35 program, halting the delivery of jets to the country and excluding Turkish manufacturers from joint production. However, Turkey received two more jets two weeks ago after the delivery of the first batch in June 2018, and four Turkish pilots currently continue their training at the Arizona base.

Washington argued that the purchase of the Russian-made S-400 missile systems could risk the security of some U.S.-made weapons and other technology used by NATO, including the F-35 fighter jets. Turkish officials assured U.S. counterparts that the S-400s will be based on domestic software and will operate with unique radar, detection and surveillance systems. But Turkey has catered to the concerns of its NATO allies and offered the establishment of a joint group.

The Ankara-Moscow S-400 deal was inked in December 2017, when the parties signed a $2.5 billion agreement for two batteries of the systems – Russia's most advanced long-range anti-aircraft missile system in use since 2007. The deal came after Turkey's protracted efforts to purchase air defense systems from the U.S. with no success.

The presidency added that Erdoğan condemned the armed assault in San Diego and offered his condolences to Trump and the American people.

A gunman walked into a suburban San Diego synagogue on Saturday morning, the last day of the weeklong Jewish holiday of Passover, and opened fire with an assault-style rifle, killing one woman and wounding three others.