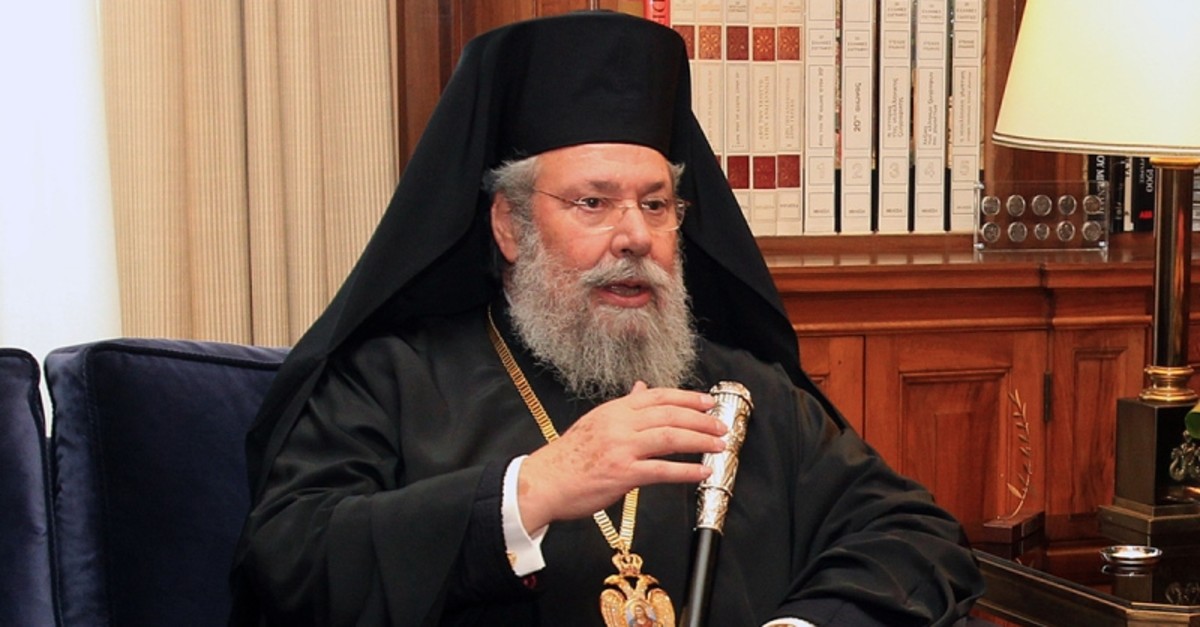 An Easter message by the head of the Church of Cyprus branding those crossing into the North for shopping or flights as people "whose national or religious values have eroded" drew the ire of authorities in the Turkish Republic of Northern Cyprus (TRNC).

The Foreign Ministry of the TRNC issued a statement Monday criticizing Archbishop Chrysostomos II, saying his words were "a clear reflection of a medieval approach and mindset."

In his highly-politicized Easter Sunday message read out in churches in Cyprus, the archbishop said those who cross daily into the TRNC for shopping or use Ercan Airport for traveling have strayed from national and religious values as much as pro-abortion groups or supporters of the cohabitation of same-sex partners.

The message described the Turkish presence on the island as a "45-year-long occupation," and said Greek Cypriot ancestors had gone through the worst times but survived because "they remained committed to the values of our faith and our homeland," as reported by the Cyprus Mail. The message went on to differentiate between those falling into the former category and those seeking any sort of solution to the Cyprus issue and exerting pressure on them in that regard, calling on those who cross into the TRNC "not to visit churches and the graves of their ancestors but to do transactions with the occupation, for fun, for the use of the illegal airport."

Reiterating the church's existing position against abortion, gender transformation or same-sex cohabitation, the message went on: "In no way can a moral deviation constitute progress or modernization, just as the Turkish invasion cannot be characterized as a peace operation."

The Turkish Cypriot foreign ministry said that these statements clearly display that there is not the slightest improvement in the Greek Orthodox Church's racist, primitive and intolerant stance.

"The most important element that would create an environment of trust on this island between the two nations is interaction between both parties and cooperation in the fields of economy and tourism," the statement read.

"We would like to call on to the Greek Cypriot Administration once again at this point; condemn these statements exacerbating the the existing lack of trust between the parties and give a peaceful and cooperative message to the Greek Cypriot community, instead of one distancing the two peoples from each other."

Cyprus has been divided since 1974 when Turkey used its guarantor rights to intervene in the island after a far-right military coup sponsored by the military junta then in power in Athens seeking to unite the island with Greece toppled President Archbishop Makarios III. After decades of inter-ethnic violence and terror mainly targeting the island's British colonial rulers until independence in 1960, Turkish Cypriots were forced to live in enclaves when Greek Cypriots unilaterally changed the constitution in 1963. Turkish Cypriot community was stripped of their political rights in violation of the constitution and founding 1959 London and Zurich agreements signed between Turkish Cypriot and Greek Cypriot community leaders and guarantor powers Great Britain, Greece and Turkey.

After 1974, the island was divided by a 180-kilometer (120 mile) buffer zone patrolled by the U.N., and crossings apart from diplomatic purposes were rare. The TRNC, established in 1983, is only recognized by Turkey and faces a longstanding embargo in commerce, transportation and culture. Meanwhile, the Greek Cypriot Administration enjoys recognition by the international community as the Republic of Cyprus established in 1960, which is a member of the EU.

In 2003, the TRNC government eased the crossing regime for Turkish Cypriot citizens and allowed crossings to be made with identity cards and passports without prior notice, while also easing the regime of arrivals from Greek Cyprus. The move was a normalization and goodwill gesture a year before a peace plan championed by former U.N. Secretary General Kofi Annan was put to vote in a referendum and agreed by the Turkish community but rejected by Greeks.

Since then, the number of crossings increased to nine with the latest two additions agreed on Nov. 12, 2018 in a meeting between TRNC President Mustafa Akıncı and Greek Cypriot leader Nicos Anastasiades.

Accordingly, TRNC citizens and Greek Cypriots can easily travel through the Green Zone. To support its embargo-stricken economy and to boost the tourism sector, the TRNC applies a softer regime, granting visas or entry permits to foreigners at customs gates, except for a few countries that need visas beforehand. Whereas Greek Cyprus, capitalizing on its political and economic advantages, can fine or deport foreign nationals that arrive on the south side after crossing from the North, while Turkish citizens entering from the TRNC face immediate deportation via Greece if caught — a process that can last up to one week since Ankara and the Greek Cypriot Administration do not have diplomatic relations.

Especially since 2003, many Turkish Cypriots living in the TRNC have also obtained RoC citizenship and passports in line with the bi-communal constitution to work in the South, travel abroad or enjoy EU advantages. Both communities travel back-and-forth over the Green Line to visit their native settlements before 1974, re-unite or get together with their former neighbors and relatives and spend their weekends. Many Greek Cypriots, still trying to heal the wounds their Eurozone economy suffered in the 2008 crisis and the collapse of Greece's economy, travel to the North since the prices of fuel, foodstuffs and other commodities are significantly cheaper than in the South, despite being solely dependent on trade from Turkey. The Turkish lira's slump in 2018 greatly increased the demand from the South with local news outlets reporting kilometers-long queues on weekends.

Flights to the country's Ercan International Airport can only be carried out through Turkey but this has become less of a problem in the last decade since the growth of the Turkish aviation sector has allowed Turkish airliners to provide frequent and good quality connections.

Negotiations to reunify the Turkish Cypriot and Greek Cypriot communities resumed after 2004, although talks have continuously stalled and restarted multiple times since they began.

The most recent talks aimed at reunifying the island came to an impasse in Switzerland in July 2017. The U.N. in January asked Guterres to report on his efforts to restart talks, warning that without progress toward a political solution, U.N. peacekeepers will not remain indefinitely on the divided island.

Turkey blames Greek Cypriot intransigence for the talks' failure and has been maintaining that it has always been willing to make the necessary efforts to find a solution to the decades-long Cyprus issue.