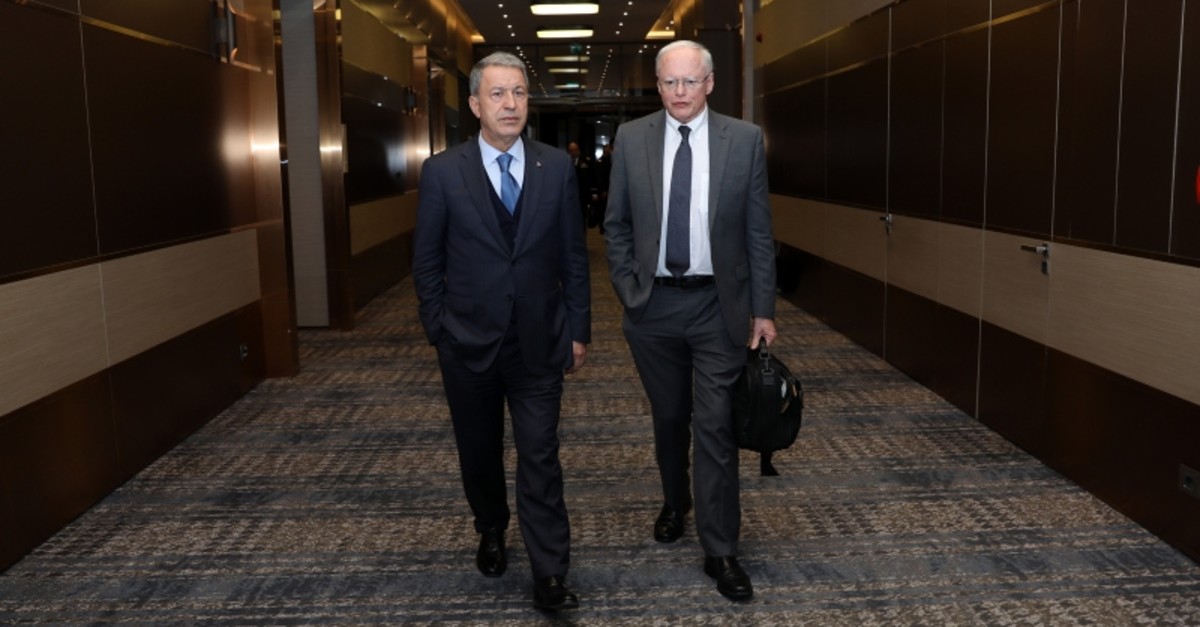 National Defense Minister Hulusi Akar and United States' Syria envoy James Jeffrey discussed the latest developments in Syria, particularly in Manbij and the east of the Euphrates, in a meeting in Istanbul late Wednesday, Turkey's Defense Ministry said in a statement.

Turkey has long opposed U.S. cooperation with the People's Protection Units (YPG) against Daesh forces, saying that using one terror group to fight another makes no sense.

As the U.S. continues its preparations to draw down its presence in Syria, Turkey has aired its concern about Washington's support for YPG/PKK terrorists in northeastern Syria.

In response to Turkey's concerns, Jeffrey earlier this month said that the U.S. will continue working on an established safe zone along the Turkish-Syrian border in which YPG would withdraw to ensure it remains free of any threat to Turkey.

Prior to his meeting with Akar, Jeffrey met with Presidential Spokesman İbrahim Kalın to discuss the post-U.S. withdrawal process in the war-torn country, the implementation of Manbij road map and the planned safe zone without any YPG presence along the Syria-Turkey border.

In December 2018, President Erdoğan announced that Ankara was preparing for a third offensive in northern Syria, this time east of the Euphrates, which is dominated by the YPG, to rid the region of terrorists.

In an effort to assuage Turkey's security concerns, Washington and Ankara reached the Manbij agreement in June 2018 that focuses on the withdrawal of YPG terrorists from Manbij to stabilize the region. The deal proposed a three-stage process to be realized within 90 days. It foresaw the withdrawal of the terrorist organization, joint Turkish-American patrols that began in November 2018, and the establishment of a new local administration made up of people who reflect the ethnic composition of the area.

Washington, however, has long been dragging its feet on the implementation of the Manbij deal while Turkey has been pointing out that the deal can set an example for the reconstruction of Syria.