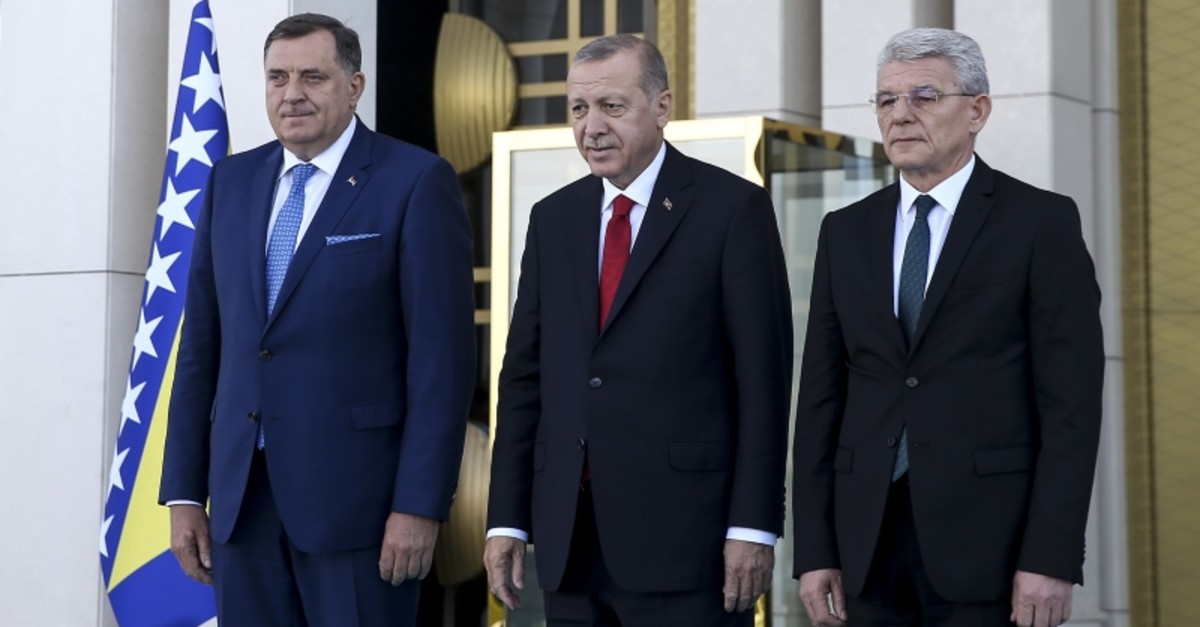 Erdoğan received Chairman of the Council and Serb member Milorad Dodik, and Bosniak member Sefik Dzaferovic of the Presidential Council in an official ceremony held at the presidential complex.

The Presidential Council in Bosnia-Herzegovina has three members, representing Bosniaks, Serbs and Croats. The members are elected for a period of four years and rotate every eight months.

Turkey and Bosnia-Herzegovina on Thursday signed a revised free trade agreement and a memorandum of understanding on the Sarajevo-Belgrade Highway Project.

"We will provide all kinds of support to TurkStream gas pipeline project to go through Bosnia and Herzegovina," Erdoğan said.

The TurkStream is a project which will carry Russian gas via a pipeline under the Black Sea bypassing Ukraine and onward through Bulgaria, Serbia, and Hungary.

The president stressed that Sarajevo-Belgrade Highway Project, supported by Turkey, will have a positive impact on the stability of Bosnia-Herzegovina.

Erdoğan said that advancing regional cooperation in the Balkans was also one of the subjects which were discussed during a meeting with the Council members.

For his part, Chairman and the Serb member of the Council Milorad Dodik said the free trade agreement will contribute to the development of economic relations between the two countries.

Dodik stressed that Sarajevo-Belgrade Highway Project is of "high importance" for Bosnia and Herzegovina as well as the whole region.

Speaking on TurkStream project, Dodik underlined that it is "important" for his country to be a part of a route which links Turkey to the West.

He thanked Erdoğan for contributions to the peace and stability of Bosnia-Herzegovina.

Bosniak member of the Council Sefik Dzaferovic was also present at the joint news conference.

Following the news conference, the Turkish president hosted a dinner in honor of the visiting dignitaries.

Thursday's visit is the first since Dodik and Dzaferovic were elected last October.

The Croat member Zeljko Komsic could not travel to Turkey due to his health problems.