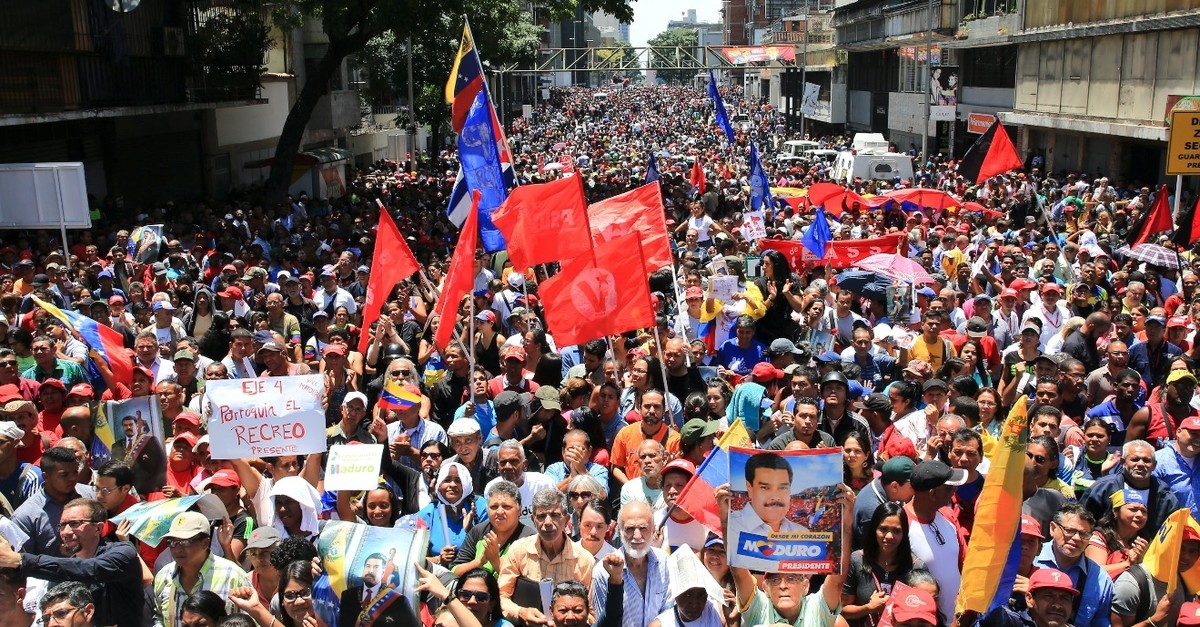 As a country that has fought against coups itself, Turkey condemned the coup attempt in Venezuela and urged the world to respect the people's democratic choice

Turkey reiterated its support for the legitimately elected president and government in Venezuela, strongly opposing U.S.-backed opposition leader Juan Guaido's latest call for a coup. Following Guaido's call on Tuesday to the military to help him oust President Nicolas Maduro, Turkish officials immediately denounced the action. President Recep Tayyip Erdoğan condemned the apparent coup attempt, saying the whole world should respect the democratic choices of Venezuelans. "Those who are in an effort to appoint a postmodern colonial governor to Venezuela where the president was appointed by elections and where the people rule should know that only democratic elections can determine how a country is governed," he tweeted.

"As a country that has fought against coups itself, we condemn the current attempt to overthrow the government in Venezuela. The world must respect the Venezuelan people's democratic choice," the president said. "The ballot box is essential in democracies," he added. Turkey survived a coup attempt orchestrated by the Gülenist Terror Group (FETÖ) and its U.S.-based leader, Fetullah Gülen, on July 15, 2016. The defeated coup attempt left 251 people killed and nearly 2,200 injured in Turkey. The U.S. is one of the Western countries where FETÖ, accused of carrying out the July 15, 2016, coup attempt in Turkey through its infiltrators in the military, remains active. It is home to a large community of Gülenists, including group leader Fetullah Gülen.

"We are concerned at reports of moves against the constitutional order in Venezuela. We stand against attempts to change legitimate governments through undemocratic ways. Problems should be resolved through dialogue. We stand with the Venezuelan people," Çavuşoğlu wrote on Twitter.

Meanwhile Justice and Development Party (AK Party) spokesman Ömer Çelik called the overthrow attempt "the biggest treachery military elements can commit against a nation," saying that no country can appoint a head of state in another country.

"Turkey sides with the constitution and the elected administrators of countries and against all kinds of coups," he asserted.

Jorge Arreaza praised Erdoğan on Twitter for his determined and overt support for international law and peace and respect for democracy in Venezuela.

Meanwhile, Bolivian President Evo Morales issued a message condemning the coup attempt and expressing confidence that Maduro and the Venezuelan republic would defeat this "new attack by the empire," referring to the United States. "We strongly condemn the attempted coup in Venezuela by the right wing that is submissive to foreign interests," he wrote on Twitter.

He blamed the U.S. for "provoking violence and death in Venezuela."

Cuban President Miguel Diaz-Canel also condemned the coup attempt, writing on Twitter: "We reject this coup movement that aims to fill the country with violence. The traitors who have placed themselves at the forefront of this subversive movement have used troops and police with weapons of war on a public road in the city to create anxiety and terror."

Guaido's supporters, however, came to his defense, with the governments of Colombia, Panama, Brazil, Chile and Argentina issuing statements of support, while Spain called on Venezuela to avoid bloodshed and move toward democratic elections.

Organization of American States (OAS) President Luis Almagro applauded the "adhesion" of some military forces to Guaido and stressed the necessity of a peaceful transition of power. "We call on the military and the people of #Venezuela to be on the right side of history, rejecting dictatorship and the usurpation of Maduro, uniting in search of freedom, democracy and institutional reconstruction, headed by @AsambleaVE and the President @jguaido," Colombian President Ivan Duque tweeted.

Government spokeswoman Isabel Celaa of Spain, which has thrown its support behind Guaido, said Madrid thinks he "is legitimate to carry out the transformation of Venezuela;" however, emphasizing, "Spain is not supporting any military coup."

The White House, meanwhile, a main backer of Guaido, said that U.S. President Donald Trump had been briefed on the developments in Venezuela. "The president has been briefed, and we are monitoring the ongoing situation," White House press secretary Sarah Sanders said in an email. "Today, interim President Juan Guaido announced the start of Operación Libertad. The U.S. Government fully supports the Venezuelan people in their quest for freedom and democracy. Democracy cannot be defeated," Secretary of State Mike Pompeo tweeted.

"The FANB must protect the Constitution and the Venezuelan people. It should stand by the National Assembly and the legitimate institutions against the usurpation of democracy. The United States stands with the people of Venezuela," Bolton tweeted, referring to the FANB armed forces. The European Union called for free and fair elections Tuesday as a way to resolve the situation in Venezuela.

"We reiterate that there can only be a political, peaceful and democratic way out for the multiple crises the country is facing," EU diplomatic chief Federica Mogherini said in a statement.

She said the EU rejected any form of violence and called for a de-escalation of the conflict to prevent the loss of lives.

"We will continue to spare no efforts to achieve a reinstatement of democracy and rule of law, through free and fair elections, in accordance with the Venezuelan constitution."

The EU is closely following the latest events in Venezuela, she added.

In January, Guaido, the leader of Venezuela's opposition-controlled National Assembly, invoked the constitution to assume an interim presidency, arguing that Maduro's re-election in 2018 was illegitimate.

He has been traveling outside the capital, Caracas, more and more in recent weeks to try to put pressure on Maduro to step down.

Earlier Tuesday, Venezuelan opposition leader Juan Guaido released a video in which he could be seen alongside a small contingent of uniformed military personnel and armored vehicles calling for an uprising to end the "usurpation" of President Nicolas Maduro.

Guaido stressed that it was the beginning of the final phase of "Operación Libertad," or Operation Liberty, to oust Maduro.

"The National Armed Forces have made the correct decision. They have the support of the Venezuelan people," he said.

Guaido also called on Venezuelans to take to the streets to support the "democratic forces" and "recover the country's freedom."

Venezuelan leader Nicolas Maduro has thwarted the latest coup attempt against his government, as opposition leader Juan Guaido's call appeared not to have triggered a broader military revolt. The military has so far supported the country's democratically elected president, Maduro, and refused to back Guaido, who declared himself interim president in January and has backing from dozens of countries, including most of Latin America and the U.S. Maduro has called Guaido a U.S. backed "puppet" who seeks to oust him in a coup.