Erdoğan: Turkey's only expectation from NATO is to act as a proper ally 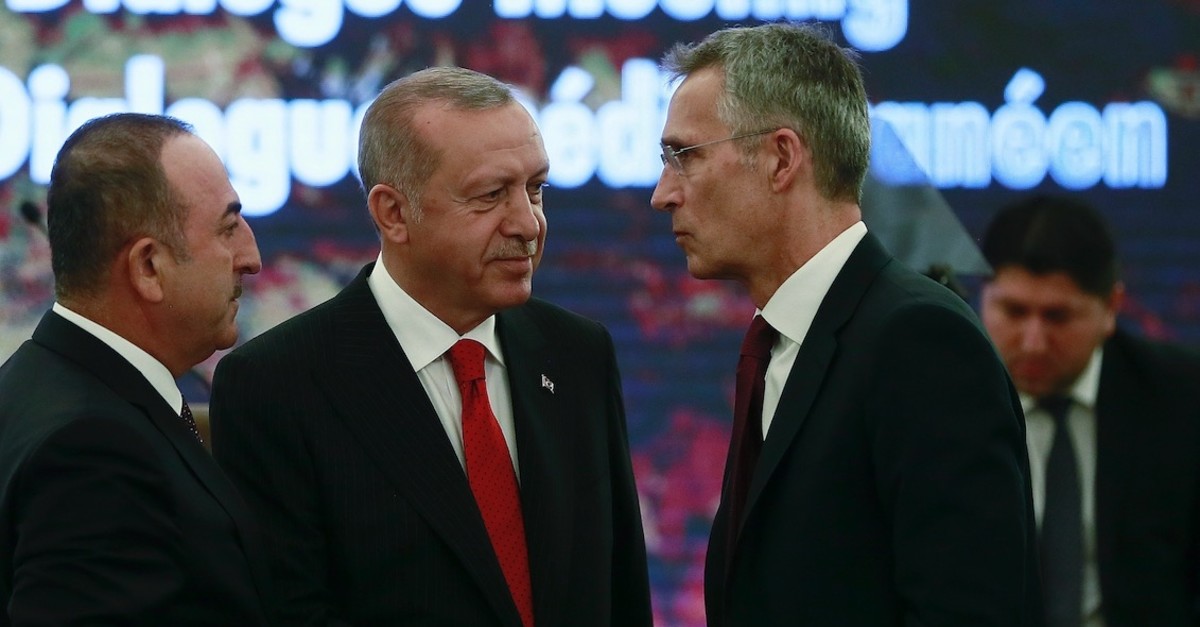 Speaking at a NATO meeting, President Erdoğan reiterated Ankara's expectation of support from the alliance in Turkey's ongoing fight against terrorism

The only expectation that Turkey has for NATO is that the organization act as a true ally to the country, President Recep Tayyip Erdoğan said Monday. Speaking at a NATO meeting in the capital Ankara, Erdoğan underlined Turkey's ongoing fight against terrorism and reiterated its expectation of support from NATO, saying that the organization should stand behind its fundamental principles regarding the spirit of the alliance. "It is against the nature of NATO to expect ally countries to deal with serious security challenges such as terrorism by themselves," Erdoğan said, emphasizing that Turkey has been fighting multiple terrorist organizations at once, all by itself.

Reminding the audience about Turkey's Operation Euphrates Shield in Syria that was launched against Daesh, Erdoğan said Turkey has become the only NATO state that had close combat with a terrorist organization that posed a threat to the whole world.

Previously, Turkey conducted two offensives in northern Syria: Operation Olive Branch and Operation Euphrates Shield. The first was launched by Ankara to clear its borders of Daesh terrorists, while the second was to prevent the PKK-affiliated People's Protection Units' (YPG) ultimate plan of establishing an autonomous region in northern Syria by connecting Afrin to Kobani and Jazeera.

Following the operations, Turkey has also been involved in rebuilding infrastructure and health and educational institutions in the towns. Schools are being renovated and a hospital is being built. Turkey has also helped locals build olive oil facilities in the town where agriculture is the main source of income for residents. Thanks to the success of both operations and post-operation developments in the liberated areas, the number of refugees returning to their hometowns has increased in recent months. The number has reached more than 320,000, the president said.

"While our country has been facing the issues [regarding terrorism] by itself, it struggles with the PKK's Syrian affiliates, the YPG and the PYD [Democratic Union Party] in Syria and FETÖ [Gülenist Terror Group]," the president said.

"In the last three days, our six soldiers and two civilians were killed by the PKK and its Syrian wings. Daesh directly targets our country through the videos that it shares. FETÖ continues its destructive activities toward our country abroad. [And while all these have been happening] some of our allies are providing opportunities to these terrorists to escape from justice," Erdoğan said. In terms of Turkey's other activities in Syria, Erdoğan gave the example of the northwestern province of Idlib.

"In Idlib, which was at the point of a major humanitarian crisis, we've taken action and enabled peace to be established. In this way, we have not only saved the lives of thousands of innocent Syrians but also prevented a new irregular wave of refugees from heading toward Europe," the president expressed.

Idlib, home to 1.5 million people, is the last opposition enclave in Syria that has been protected from a massive regime offensive by the deal reached between Ankara and Moscow in September 2018. The deal established a cease-fire in Idlib on the condition that heavy arms and extremist groups withdraw from the region. Prior to the agreement, the Bashar Assad regime was signaling an expansive military operation against Idlib after it recaptured three "de-escalation" zones out of four determined by the Astana process in Idlib, north of the central city of Homs, the eastern Ghouta area outside Damascus and in the southern provinces of Daraa and Quneitra.

However, despite the deal, regime attacks on the last opposition enclave have been escalating for some time, killing thousands of civilians with many others injured, fueling concerns that a new crisis will erupt. A new refugee crisis is not only a concern for Turkey, which already hosts nearly 4 million refugees, but it would also have implications for Europe. It has been estimated that around 700,000 people may arrive in Turkey, from where they might attempt to go to Europe. He also said that Turkey is the country where the largest number of refugees are being hosted, saying that in a period when cultural racism is on the rise, Turkey sets examples that give hope to humanity. Since a 2011 uprising evolved into an all-out civil war in Syria, its northern neighbor Turkey has seen an influx of thousands of displaced people taking shelter in its border towns. Today, the country has more than 3.5 million Syrian refugees, the largest Syrian refugee community in the world.

Erdoğan also mentioned the S-400 purchase from Russia, which has caused ongoing debates with the U.S, saying that the purchase is a matter of national security and should be evaluated in that respect.

"The relationships that Turkey develops with different regions and countries are not alternatives to each other but instead complementary to each other," Erdoğan underlined.

The Ankara-Moscow S-400 deal was inked in December 2017, when the parties signed a $2.5 billion agreement for two batteries of the system, Russia's most advanced long-range anti-aircraft missile system. Turkey will be the first NATO member country to acquire the system. Moreover, Turkey seeks to build its own missile defense systems as the deal also involves the transfer of know-how and technology. Yet, the move caused harsh criticism from particularly the U.S.

Turkey has remained unfazed in the face of threats from the U.S., with many officials repeatedly stressing that the S-400 deal is not a threat to NATO systems and is not on the table to be used as a bargaining chip against the F-35 jets and Patriot missile negotiations.