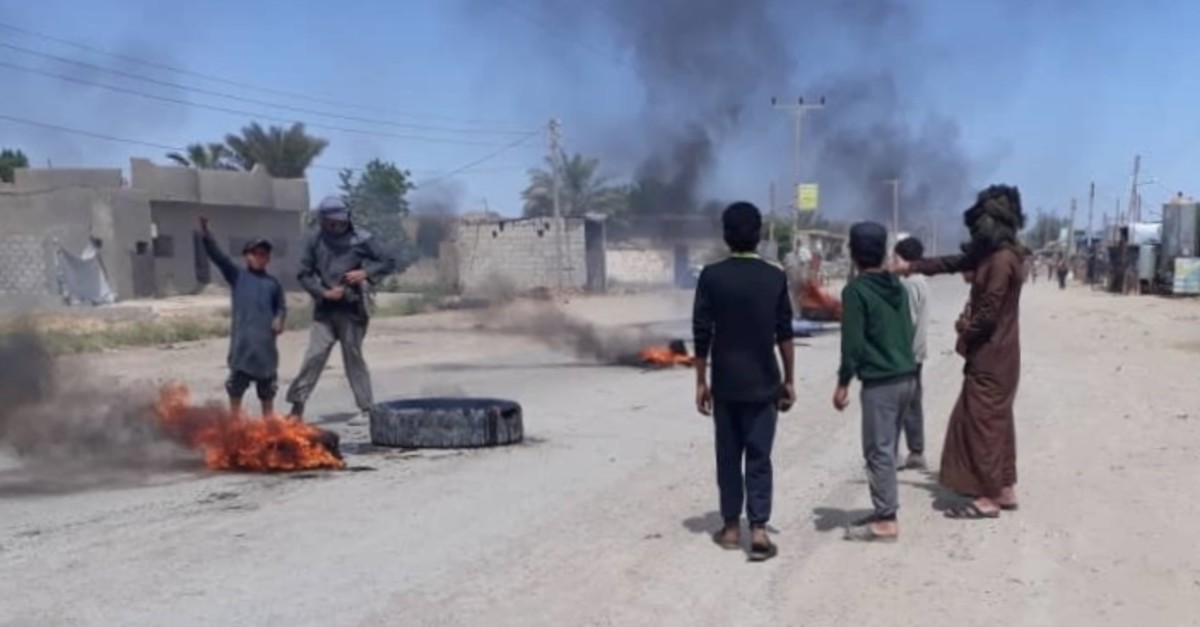 The local residents of Deir el-Zour, the largest oil-rich city in northeastern Syria, continued to protest the oppressive practices of the PKK-affiliated People's Protection Units (YPG) as tensions took a new turn after the terrorist organization killed seven civilians, leading to growing international criticism of Washington's pro-YPG policy. Citing local sources, Anadolu Agency (AA) yesterday reported that in an apparent panic over the escalating demonstrations, the YPG opened fire on protesters in the Suhayl district of Deir el-Zour, killing at least seven civilians. Sources underlined that following the shootings, local people obstructed main highways with burning tires, while warplanes belonging to the U.S. reportedly provided air support for the terrorist organization. This is not the first time the YPG reacted harshly to protesters in Deir el-Zour. According to activists on the ground, YPG forces stormed a house in the village of Daman and killed six people, including two women and a child, on April 24.

In relation to the issue, Kadir Üstün, Executive Director at Political, Economic and Social Research Foundation (SETA) DC, told Daily Sabah that, "Although the demonstrations are unlikely to affect U.S. policy in the long term, it is apparent that the YPG has been having difficulty establishing its legitimacy over historically Arabic territories."

Noting that the YPG is trying to exert its control over regions that are demographically not Kurdish, Üstün underlined that it would be hard for the terrorist organization to ensure stability in these regions in the future.

The demonstrations in more than a dozen villages of the northeastern province have been ongoing for two weeks now, two years after the terrorist organization captured the city. Locals, including Arab tribes, are complaining about atrocities, compulsory conscription of young men to the ranks of the organization and the smuggling of petrol out of the city, while demanding better services, jobs and a bigger role in decision-making. People suffer from a lack of services, rising crime, fuel shortages and anger over what they see as growing Kurdish influence.

"People are fed up with the YPG. They are robbing the wealth of the people in the region," Omar Abu Laila, a Europe-based activist told the Associated Press (AP).

The Syrian Observatory for Human Rights also announced that the people from the terrorist groups have attempted to organize several meetings with the representatives of the Arabic tribes but all of them failed. A representative speaking to AP regarded the reasons for the collapse of the talks as the lack of willingness to make any concessions on the part of the YPG.

Thanks to the support of the U.S. under the pretext of the fight against Daesh, the YPG has managed to occupy one-third of Syria and had the opportunity to practically apply its form of governance and communes, as dictated by its ideology. The terrorist organization established the so-called "nine committees," similar to ministries. In a bid to cement its power, the terrorist group frequently employs oppressive and cruel means to inflict fear in the public and hush the dissidents. Various human rights organizations documented cases of human rights abuses ranging from recruiting child soldiers, torture, ethnic cleansing, and destroying and confiscating locals' homes.

The YPG has forced young people from areas under its control to join their forces within the so-called "compulsory conscription in the duty of a self-defense law" since 2017. According to this practice, young people between the ages of 18 and 30 are forcefully recruited for nine months, with the possibility of extension if necessary. Those who refuse to join the YPG "face serious repercussions," including imprisonment.

The group also systematically and forcefully displaced Arabs from their homes in line with their policy to demographically change the traditionally Arab towns of the region by resettling the Kurdish population. Amnesty International has also documented a systematic wave of forced displacement and home demolitions amounting to war crimes carried out by the Autonomous Administration dominated by the YPG in 2015.

The most recent reaction toward the YPG's policies and the U.S.' support of them came from Moscow. The Russian government underlined that the U.S. policy in Syria, where they have been resettling Kurds in territories historically populated by an Arabic population to lay the foundation for future autonomy claims based on ethnic composition, will fuel ethnic divisions in the future, endangering the peace process.

"The U.S. attempts to resettle Kurds in areas where Arab tribes have always lived historically is a very bad process and a direct way to separatism and the breakup of Syria," Russian Foreign Minister Sergey Lavrov said on Wednesday referring to the YPG following his meeting with his Iranian counterpart Javad Zarif. Pointing out that the U.S. presence in the war-torn country is illegal, Lavrov stressed that U.S. troops are deployed illegally and Washington is still attempting to play the Kurdish card, "as it tends to happen in the areas they controlled." He called for the White House to respect the territorial integrity and sovereignty of Syria.

Indecisive policies by the U.S. fail to appease locals, Turkey

Washington's faltering policies in Syria have not only amplified the fears of locals but also fuel the national security concerns of some of its allies, including Turkey, regarding the future of Syria.

Touching upon the U.S.' policies in Syria, Kılıç Buğra Kanat, an expert on Syria, highlighted in a panel of the SETA Ankara that Washington's moves and stance in Syria are mainly shaped by officials from the military and leave the White House with no strategy nor a policy of its own, which leads to uncertainty. "In order for Turkey and the U.S. to be strategic allies, there needs be a strategy. Yet, Washington has no long-term strategy," Kanat added. Ankara has repeatedly told Washington that the YPG is no different from the PKK and using one terrorist organization to fight another will only create more instability for the country. The U.S., however, while listing the PKK as a terrorist group, opted to continue its steadfast militarily support for the terrorist organization. Ankara sees the YPG as an extension of the PKK, which has claimed the lives of more than 40,000 people in its 30-year terror campaign against Turkey.

Touching on the recent talks between the NATO allies on the planned safe zone, Nihat Ali Özcan from TOBB University of Economics and Technology said that Washington's utmost interest is finding a place at the political table to form the future of Syria through the YPG. He emphasized that Washington is ready to use diplomacy and address some of the security concerns of Turkey - one of the examples being the safe zone - in order to halt the unwanted repercussions of conflictive interest with its ally. The two countries have been mulling over the establishment of a 25-to-30 kilometer safe zone along the Syrian-Turkish border for some time now. Forming the safe zone may allay the security concerns of Ankara. Turkish officials have also been stressing that a safe zone should not be a plan to protect YPG terrorists.