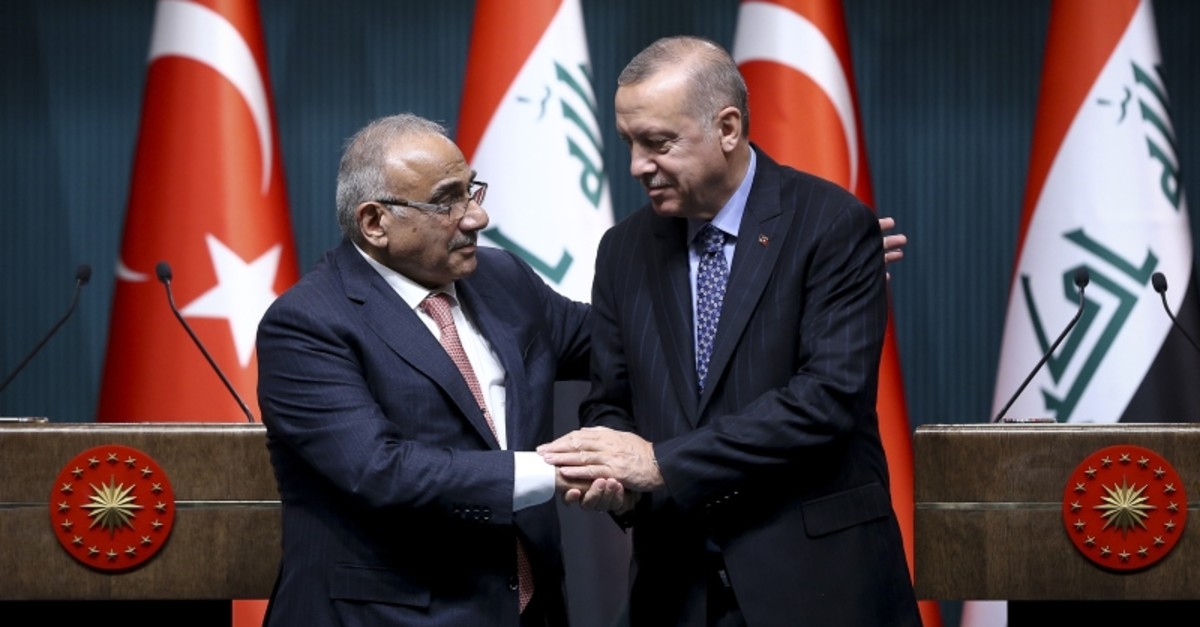 Iraqi Prime Minister Adel Abdul-Mahdi visited Turkey on Wednesday and met with President Recep Tayyip Erdoğan to discuss bilateral issues and the fight against terrorism, in a bid to further strengthen bilateral relations.

The two leaders discussed the fight against terrorism, reconstruction works in Iraq and steps to be taken to enhance cooperation between Iraq and Turkey, especially in the areas of trade and energy, during their meeting at the Beştepe Presidential Complex in the capital Ankara.

In a joint news conference after dinner, Erdoğan said Turkey and Iraq had signed a mutually beneficial military cooperation and trust agreement.

"We agreed on rebuilding Iraq, developing areas affected by Daesh occupation and establishing a trade corridor to the south of Iraq," Erdoğan said.

He added that the defense ministers and intelligence chiefs of Turkey and Iraq would meet soon to discuss further details of the agreements.

Erdoğan went on to say that Turkey and Iraq are on the same page regarding Syria's territorial integrity.

On the energy front, the Iraqi and Turkish leaders highlighted the importance of reopening the Kirkuk-Ceyhan oil pipeline which has been vandalized by the Daesh terror group.

Abdul-Mahdi said: "We will never accept any security threat against Turkey stemming from the territory of Iraq."

The fight against the PKK terrorist organization was one of the topics at the top of the two leaders' agenda since it is a major security concern for both countries.

In mid-2014, the PKK managed to establish a foothold in Sinjar on the pretext that it was protecting the local Yazidi community from the Daesh terrorist group. Since then, the PKK has reportedly established ground in Sinjar as a new base for its logistic and command-and-control activities.

Iraq's Kurdistan Regional Government (KRG) previously said the PKK's presence in Sinjar is unacceptable and called for the militants to leave the area.

Turkey has long been stressing that it will not tolerate terror threats posed against its national security and has called on Iraqi officials to take the necessary steps to eliminate the terrorist group. Ankara has also previously underlined that if the expected steps are not taken, the TSK will exercise its rights and launch a cross-border operation in the area, as it did during Operation Euphrates Shield and Operation Olive Branch in Syria.

The Turkish Armed Forces (TSK) regularly conduct cross-border operations in northern Iraq, where PKK terrorists have hideouts and bases from which they carry out attacks in Turkey.

Another important issue during the meeting was the reconstruction of Iraq after the three-year war against Daesh. The reconstruction will include cities destroyed by terror and war, ruined roads, buildings, damaged electricity production capacity and distribution networks and other damaged sites. Iraqi infrastructure has also been deteriorating due to insufficient investments and maintenance.

Water management in Iraq was another issue which was extensively discussed in the meeting. Previously, both countries agreed to work together on water management to prevent a water crisis in the region. Turkey had also decided to send a special representative, Veysel Eroğlu, to Iraq to share Turkey's experiences on the issue.