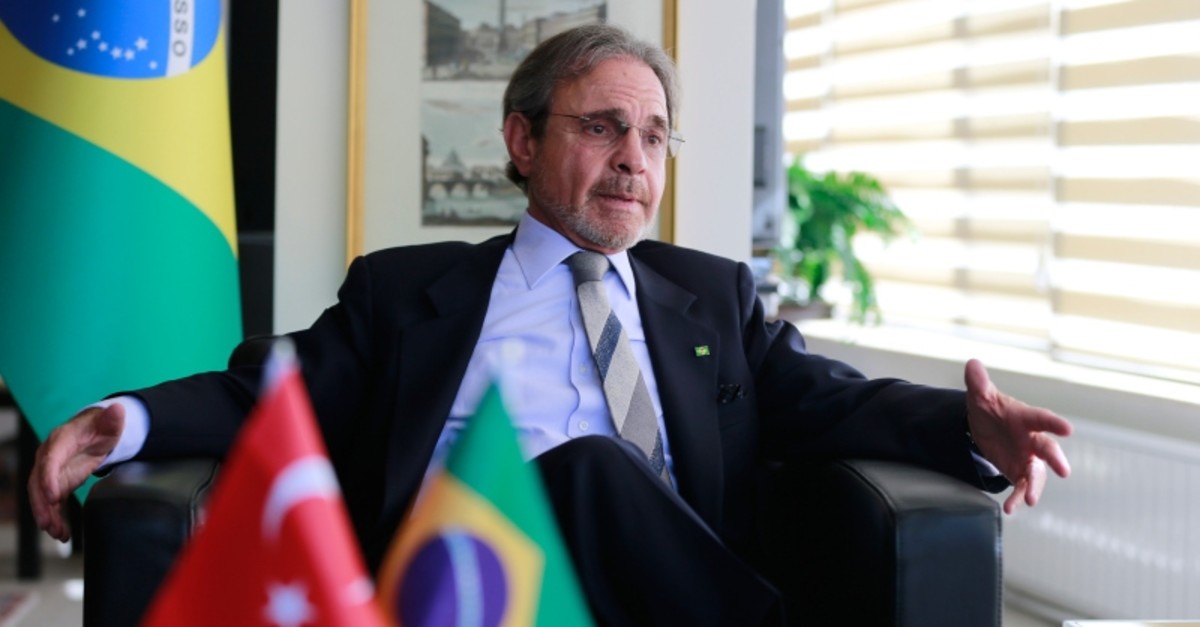 Brazilian envoy to Turkey Eduardo Riccardo said bilateral relations between Turkey and Brazil will improve if more fields of operations were introduced and people of both countries got to know each other better.

Speaking to Anadolu Agency (AA), Riccardo, who has been in Ankara for two years now, said bilateral ties between Brazil and Turkey are rooted in history, dating back to the Ottoman era with the coffee trade. He added, however, that cultural interactions should be enhanced and urged carrying relations a step forward.

"A new government has begun its work in Brazil. We hope that political consultations between the two countries will be reinitiated. Activities to enhance cultural relations will be encouraged," he said. Noting that Turkish TV series has attracted a great deal of attention in the country, Riccardo said these series were loved by Brazilian people due to their conservative national identity and thanks to these series, people had the opportunity to get to know the Turkish culture.

Turkish TV series have had a positive impact on the South American market, in Argentina and Brazil in particular, from where Turkey welcomes nearly 250,000 tourists a year. Latin American people find Turkish productions as relatable and not coming from a historically dominating Western country.

Pointing out that the Brazilian Embassy is striving to overcome language and distance barriers between the two countries, Riccardo said, "In line with this aim, they have been organizing movie screenings in Portuguese for students in Ankara.

Riccardo said he is also learning the Turkish language. "Turkish is a pretty difficult language, but the language is a very effective tool to understand a society. Therefore, I have been taking language courses and learning Turkish."

Touching upon cooperation in the defense and aviation industry, Riccardo said Turkey and Brazil have carried out numerous important projects in these fields, and the Turkish T129 ATAK, one of the most effective attack helicopters in its class, received high praise in the 12th Latin American Defense and Security Exhibition in March. In the fair, Turkish companies showcased their products, featuring armored vehicle platforms, as well as various unmanned land and aerial vehicles, marine systems, weapon systems, electronic systems, munitions, simulators, military textile products and logistics support products.

Although Turkey has had diplomatic contact with Latin American countries since the 19th century, relations remained stagnant due to geographical distance up until the early 2000s. However, with the establishment of the Action Plan for Latin America and the Caribbean in 1998 and the declaration of 2006 as the Year of Latin America and the Caribbean in Turkey, relations gained new momentum. From that point on, the two sides began to pay reciprocal official visits. Brazil even built a strategic partnership with Turkey to strengthen relations and in 2006 the Turkey-Brazil High-Level Cooperation Commission was established.