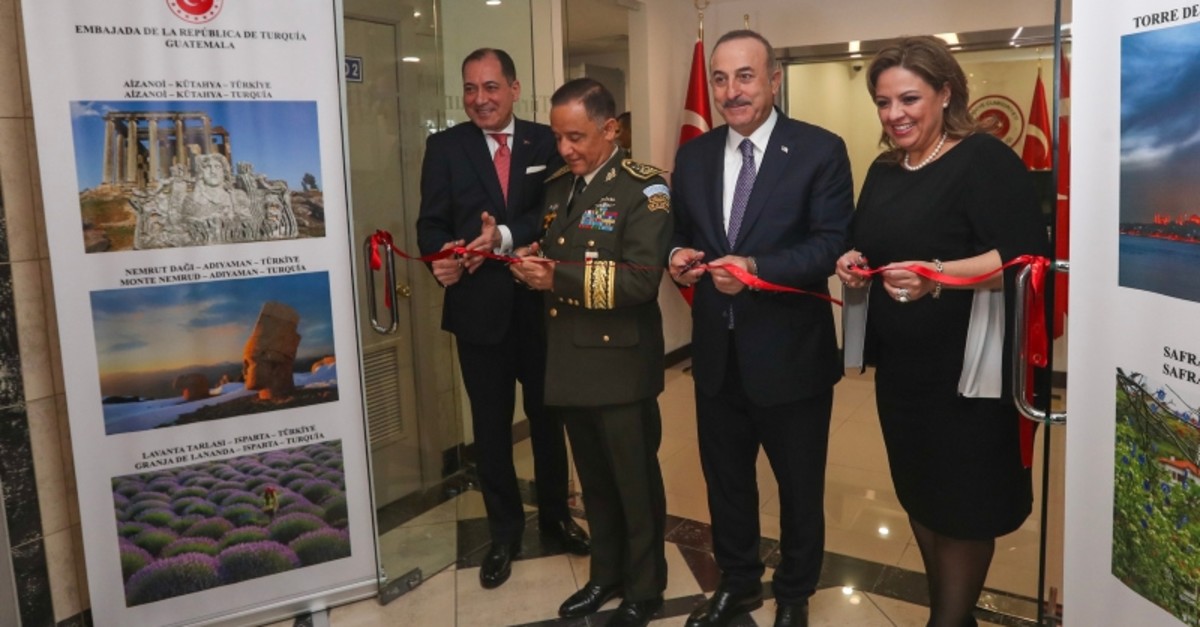 Turkey inaugurated a new embassy building in Guatemala City on Monday amid developing relations between the two countries and Ankara's increased efforts to establish closer relations with the Caribbean and South American countries.

"The new embassy building will further strengthen bilateral relations. Guatemala is one of the most important strategic partners of Turkey in Latin America," Foreign Minister Mevlüt Çavuşoğlu said at the opening ceremony, who was in the country as part of an official visit for the Central American Integration System (SICA) meeting.

He added that relations between Turkey and Guatemala are growing in every field, including diplomacy, trade and culture, thanks to the efforts of Turkey's diplomatic missions and state institutions such as the Turkish Cooperation and Coordination Agency (TİKA).

Although Turkey has had diplomatic relations with Latin American countries since the 19th century, until the early 2000s the relations remained friendly but, as Turkey's Foreign Ministry defines, "stagnant" mostly due to geographical distance.

In addition, during the Cold War period, Turkey was aligned with the Western bloc, while Latin American countries were part of the Non-Aligned Movement (NAM). However, with the establishment of the "Action Plan for Latin America and the Caribbean" in 1998 and the declaration of 2006 as the "Year of Latin America and the Caribbean" in Turkey, relations gained new momentum. From that point on, the two sides began to pay reciprocal official visits to each other.

In this context, almost 200 projects and activities, especially on education, healthcare, agriculture and infrastructure, were realized between the years 2008 and 2018 by TİKA.

The foreign minister said Turkey currently had a consulate general and 16 embassies in Latin America, adding the inauguration of a Turkish Embassy in Uruguay would happen soon. Turkish Airlines will add Mexico City to its destinations in Latin America, Çavuşoğlu said.

For his part, Guatemala's Foreign Minister Sandra Jovel said that the opening of the new embassy building means the strengthening and deepening of already existing relations between the two countries, adding that the Turkey-SICA agenda will cover the issues of democratic security, climate change, disaster prevention and economic integration and the strengthening of the organizational structure.

She also thanked the Turkish people and government by pointing out TİKA's activities in the country.

Çavuşoğlu was received Monday by the Guatemalan President Jimmy Morales at the National Palace of Culture in a meeting also attended by Jovel and Turkey's Ambassador Süleyman Gökçe.