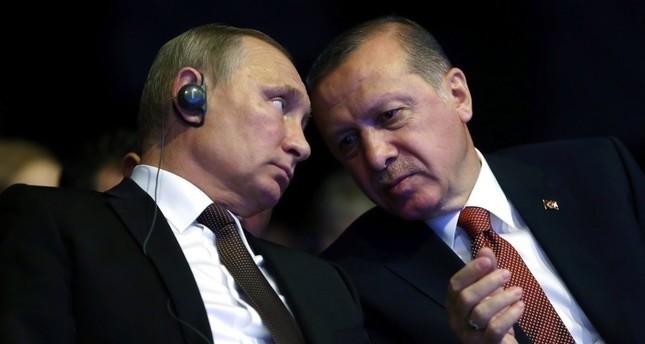 Turkey continues to put its diplomatic channels into action, especially with the Syrian regime's backer Russia, to stop regime attacks on northwestern Idlib province and prevent a further humanitarian crisis.

Speaking about the two leaders' conversation on Friday, the Kremlin's spokesperson Dimitriy Peskov said there is no difference between the perspectives of Turkey and Russia when it comes to the solution of the Idlib crisis as both countries desire a cease-fire. "The attacks on places where Russian soldiers are located, including Hmeymim and Idlib, should be stopped," Peskov noted.

As attacks by the Syrian regime have escalated since April, hundreds of civilians have been killed, while hundreds of thousands had to flee the area. The latest attack came on Thursday as seven civilians were killed by the regime's bombardment.

The Britain-based Syrian Observatory for Human Rights monitoring organization says over 285 civilians have been killed since late April in the enclave, home to almost 3 million people.

But bombings still killed seven civilians, including five in the town of Maaret al-Numan on the western edge of opposition-held territory, he said.

An Agence France-Presse (AFP) photographer reported the strikes hit a residential area, collapsing a building and killing some of those inside.

The body of a victim could be seen still in bed as rescue workers struggled to reach survivors trapped under the rubble.

The United Nations says roughly 270,000 people have been displaced by the fighting since late April and that aid agencies have been forced to halt work in some areas. Some 30 health facilities and schools have been hit, the U.N. says.

Regime attacks targeting residential areas in Syria's de-escalation zone continue to cause civilian casualties and destroy public infrastructure such as hospitals, schools and markets. At least 13 civilians were killed in attacks by regime forces and allied militias on de-escalation zones in northern Syria on Wednesday, according to sources with the White Helmets civil defense agency.

Aerial bombardment did not relent, starting around the time for sahur, the meal Muslims have before their dawn-to-dusk fast during the holy month of Ramadan. The sources said three people were killed in regime shelling of the village of Al-Bara in northwestern Syria.

Idlib is the Syrian opposition's last enclave and has been protected from a massive regime offensive by the deal reached between Ankara and Moscow in September 2018. Regime forces have been using the pretext of Hayat Tahrir al-Sham (HTS) militants holed up inside Idlib to carry out intermittent attacks on the city, intensifying their attacks since April 26.

While heavy airstrikes have worsened the humanitarian situation, Bashar Assad regime troops and opposition forces have been struggling for territorial gains in Idlib.

After the attacks escalated, the inhabitants of the city began to flock to territories liberated by Turkey with operations Olive Branch and Euphrates Shield.

Share on Facebook Share on Twitter
Previous in Diplomacy Turkey is in close talks with Russia over the latest developments... Next in Diplomacy The Brazilian city of Sao Paulo held a special session to mark its...
DAILY SABAH RECOMMENDS