Syrian NGOs call on international community to act on Idlib 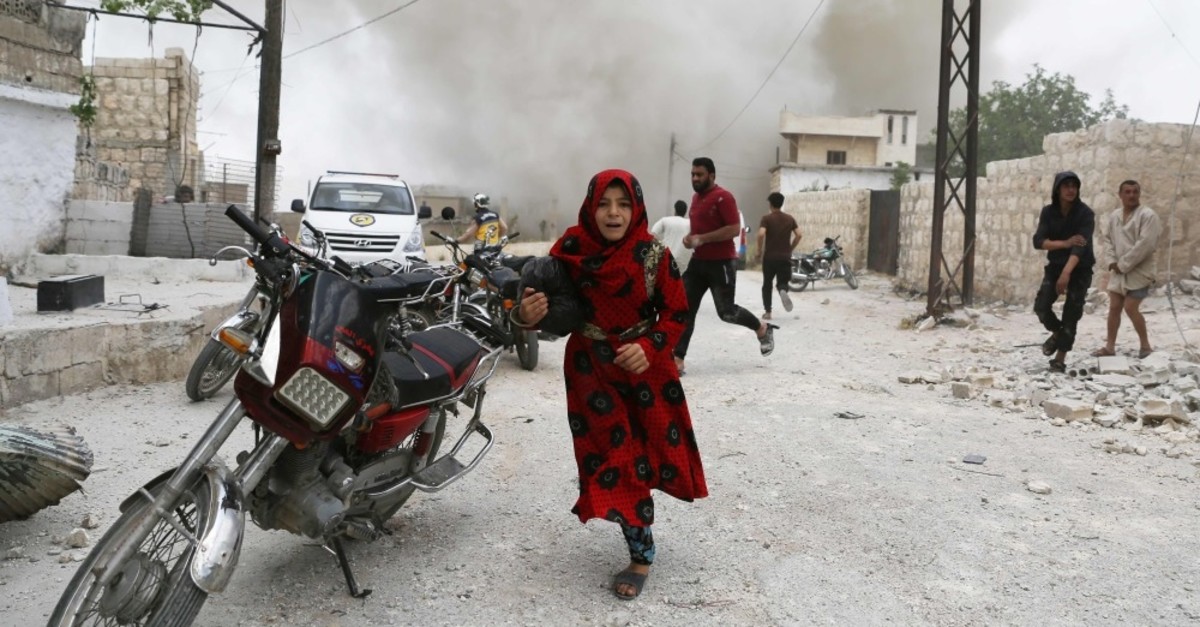 As fierce hostilities continue in northwestern Syria for the fifth consecutive week, Syrian civil society representatives criticized the international community for its lack of attention to the ongoing humanitarian catastrophe

A group of Syrian civil society organizations came together in Istanbul yesterday, calling on the international community to take action to stop regime attacks in the northwestern province of Idlib. A joint press conference called "Imminent Humanitarian Disaster in NW Syria: Act for Idlib" was held yesterday by representatives of the Syrian Civil Defense (White Helmets), the Syrian NGO Alliance (SNA) and the Idlib Health Directorate in the Beyoğlu district of Istanbul. The northwestern region of Syria, an area that contains over 3.5 million people, has been subjected to military escalation that started in the last week of April by Syrian regime forces and its allies, violating both the Sochi demilitarization zone and Astana de-escalation zone agreements.

Expressing their concerns over the disastrous consequences of the humanitarian situation that last month's escalation is leaving behind, representatives said there are limited available resources at hand to respond to the people in need and a shortage of humanitarian aid assistance to northwestern Syria.

The conference underlined that all these developments occurred in light of the failure of international diplomacy led by the U.N. Security Council to stop the escalation.

Raed Alsaleh, the chairman of the White Helmets, informed listeners about the details of the ongoing situation in northwestern Syria's de-escalation zone within the last month.

"There is a disastrous humanitarian crisis ongoing. The regime is getting worse every time when we think they can't get any worse," Alsaleh said and added that civilians are under threat of forced exile.

He also stated that main sources of food and fields have been intentionally targeted by the regime forces to push civilians into starvation. "Syrian civil society organizations spend all their efforts to provide people's needs; however, it only meets 25% of requirements," he added.

However, he criticized the international community and organizations for their lack of interest on developments in Syria.

Criticizing both the international media and U.N., Alsaleh said that everyone should take more responsibility and pay more attention. "Trust in the international community is absolutely demolished among the Syrian people," he added.

Alsaleh also underlined that international community is reluctant to put any pressure on Russia. Reminding the press about the recent Arab Union meeting, he said that no member of the Arab Union was able to raise its voice about Russia.

According to information provided by the White Helmets, there have been over 24 attacks on health facilities, six attacks on civil defense centers, 29 attacks on schools and much more on other civilian infrastructure in the past month, where the number of fatalities has exceeded 250 during the Bashar Assad regime's indiscriminate attacks targeting civilians and residential areas. Civilians had to flee their hometowns in both northern rural Hama and southern rural Idlib.

As a result, over 307,000 people have been displaced in the past two months with the majority in the past four weeks and over 200,000 of them are living in the open with no shelter, as internally displaced sites close to the Turkish border are extremely overcrowded and are already running at double capacity.

Mohannad Othman, CEO of the Al Sham Humanitarian Foundation representing the SNA, underlined that this is the single-largest mass displacement in Syria since the beginning of the crisis, with a minimal response from both international diplomacy and big humanitarian actors.

Zahed Almasri, the international relations adviser at PAC representing the SNA, underlined the ongoing health crisis in the region and said that 25 health facilities have been targeted within a month.

"People silently die in their homes because they could not get the health supplies they need," he added.

As Almasri stated that nearly 80 health facilities are in bad condition and can't provide any service. He also added that health care staff should not be subjected to any violence in a war zone according to international law, however the regime forces intentionally target health facilities and staff.

Almasri also slammed the international community and organizations for their silence against this humanitarian catastrophe.

In the conference, it was also stated that air attacks on residential areas have claimed nearly 80 children's lives and injured hundreds of others. Some 50 schools were targeted, depriving more than 45,000 children of their right to education and having necessary health assistance. Consequently, thousands of children have been forced to flee with their families to less dangerous places. Most of them have not been able to find a shelter other than the open spaces and agricultural lands, where they are exposed to different risks and humiliation.

In the end, Othman read a collective statement that called on member states of the Security Council to act quickly and take the necessary measures to stop the current hostilities under the authority of the Security Council and impose a diplomatic track to find a political solution away from the use of violence; for the guarantors of the de-escalation zone to implement the agreement in order to provide safety to the civilians on the ground; for U.N. agencies and donors to respond quickly to prevent the imminent humanitarian catastrophe from worsening; and for the Security Council to apply Resolution 2286, which demands investigations and accountability for targeting civilian infrastructure and health facilities.

Idlib is the Syrian opposition's last enclave and has been protected from a massive regime offensive by the deal reached between Ankara and Moscow in September 2018.

Its prewar population of 1.5 million has swelled to around 3 million with new refugee waves after it was designated a "de-escalation zone" under the Astana agreement between Turkey, Russia and Iran in May 2017 to pave the way for a permanent political solution in Syria. Tens of thousands of Syrians trapped in other parts of the country were evacuated there unde​r various cease-fire agreements.

Regime forces have been using the pretext of Hayat Tahrir al-Sham (HTS) militants holed up inside Idlib to carry out intermittent attacks on the city, intensifying their attacks since April 26. While heavy airstrikes have worsened the humanitarian situation, Assad regime troops and opposition forces have been struggling for territorial gains in Idlib. Ankara expects Moscow to use its influence on the Assad regime to stop the ongoing onslaught that has killed hundreds of civilians in the opposition-held enclave in recent weeks.

The White Helmets, officially known as the Syrian Civil Defense, is a volunteer organization that works to save lives. Within the White Helmets, there are 2,900 volunteers that work on the front lines of the crisis to undertake rescue operations and to provide basic services for their communities. The Syrian NGO Alliance is a group of 21 Syrian nongovernmen​tal organizations (NGOs) supporting and leading the humanitarian aid in Syria and neighboring countries within different sectors. SNA members support over 20,000 humanitarian workers on the front lines of the crisis to provide services to millions of people. The Idlib Health Directorate is a health institution that organizes and supervises the health sector in Idlib province. It provides health plans and strategies and then implements these plans in collaboration with various partners. It also works hard to provide comprehensive and integrated high-quality health care.