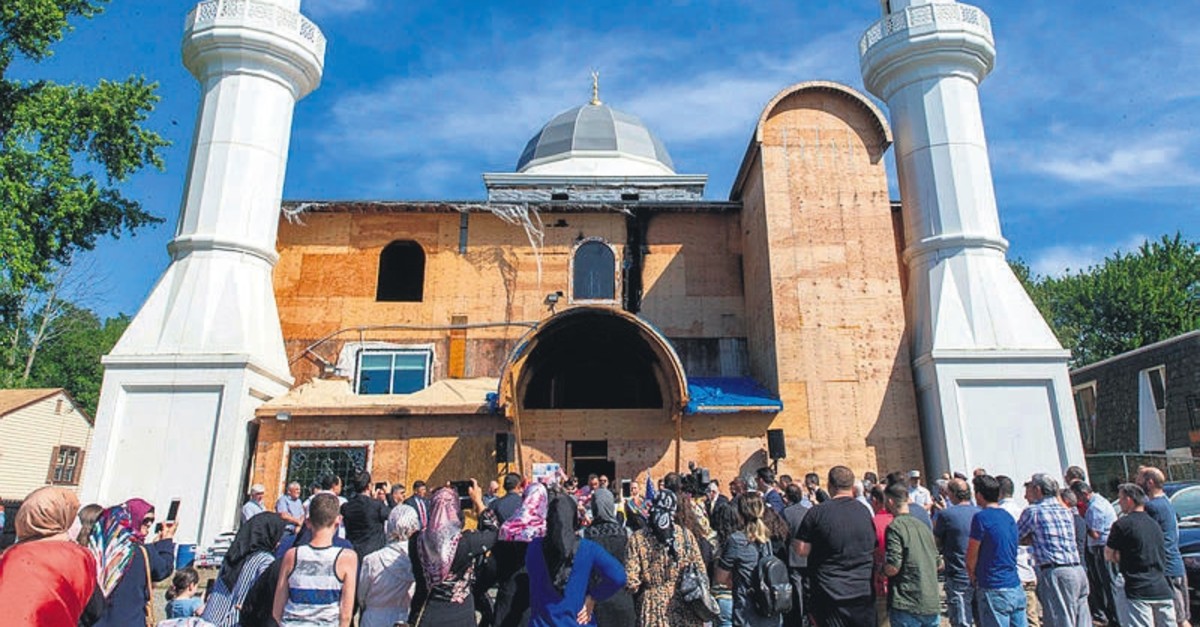 "It is obvious that these attacks will increase as long as Western politicians and media do not have strong reactions," Justice Minister Abdulhamit Gül said during his visit to New Haven Diyanet Mosque in Connecticut, which was attacked last month.

Stressing that Turkey condemns the attack on the highest level, Gül said Ankara will closely monitor the investigation process. An anti-Muslim attack took place in New Haven against a Turkish mosque on May 12, the seventh day of Ramadan, a holy month during which Muslims fast and pray. After the attack, the Religious Services Attaché of the Turkish Consulate General in New York said an investigation was underway into the fire at Diyanet Mosque and that efforts are being made to catch the perpetrators. While a reward of up to $2,500 has been offered by local officials for any information that leads to the arrest or conviction of the perpetrators, the Council on American-Islamic Relations (CAIR) also set a $10,000 reward for information on the crime. The justice minister thanked local authorities for their support, emphasizing that the mosque will be renovated. Following the attack, religious authorities in the U.S. and the administration of the Diyanet Mosque in New Haven have enhanced efforts to repair the mosque as soon as possible in solidarity with the local community.

A funding campaign was launched on a website called Launchgood for the renovation expenditures: $200,000 has been collected so far. While the damage to the mosque totaled more than $500,000, the priority was to collect $100,000 during the first phase of the donation campaign until the official investigation is completed.

Noting that an anti-Islam worldview has been encouraged in recent years, Gül said the attacks against Muslims, including the one occurred in New Zealand, and clearly shows the rising anti-Islam sentiment.

"We are witnessing an increasing number of attacks against mosques and rising fascism in Europe in recent years. Politicians and media should raise their voice against this hate rhetoric. Otherwise, these attacks will continue," Gül said.

Anti-Islam attacks soared, especially in European countries, in recent years. For example, Germany has witnessed growing Islamophobia and hatred of migrants triggered by far-right parties, which have exploited fears over the refugee crisis and terrorism. Police recorded 813 hate crimes against Muslims last year. At least 54 Muslims were injured in the attacks, which were carried out mostly by far-right extremists.

Along with attacks based on far-right motives, mosques have been frequently hit by supporters of the PKK terrorist organization in recent years.

After the terrorist group's supporters increased their assaults following the launching of Operation Olive Branch in January 2018 in northwestern Syria against the PKK's Syrian affiliate, Turkey delivered a diplomatic note to Germany asking for immediate measures to protect the Turkish community from violence.

In the latest xenophobic incident in the country, threatening letters including Nazi and nuclear weapons symbols were left in mailboxes of Turkish citizens in Cologne last week. Written in the letters, which were found in some citizens' mailboxes located in the city's Keup Street, were hate messages, including, "You are just like Jews. Soon, attacks will start to target you."

Speaking to Anadolu Agency (AA), Meral Şahin, head of a guild in Keup Street, said that the letters demanded foreign-origin citizens to leave the country before they are "bombed and killed."

"These are actions to threaten people. We are not afraid of them as we have witnessed such real incidents before," Şahin said. Yet, Germany is not the only European country that has seen increasing attacks based on anti-Islam motives. Amid soaring mosque attacks in Germany's northwestern neighbor, the Netherlands, a book named "Mosques at Target," was recently published by a 12-person team comprising of Muslim and non-Muslim academics, researchers and jurists with the initiation and coordination of the Netherlands Diyanet Foundation. The project aims to keep the growing anti-Muslim trends on the agenda and draw the public's and politicians' attention to this phenomenon. Similar to Germany, Islamic houses of worship have endured dozens of attacks in recent years in the Netherlands. The extent of the attacks vary; while in some cases attackers attempt arson against mosques with Molotov cocktails or some other explosives, there are also many assaults that feature spray-painted terror symbols or racist slurs on the walls of the mosques.