Turkey is working hard to develop good relations in all regions, Erdoğan says 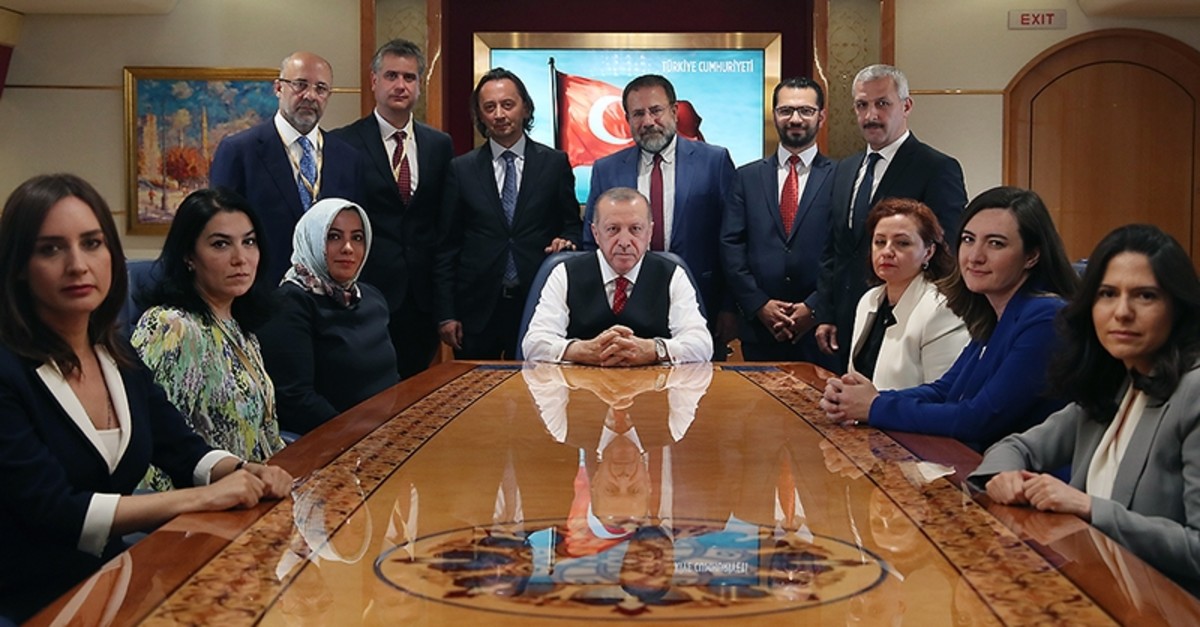 This visit is actually an indication of the strategic importance we have attributed to Asia, President Recep Tayyip Erdoğan told journalists accompanying him in a plane during his return from Tajikistan where he attended the 5th Summit of the Heads of State of the Conference on Interaction and Confidence Building Measures in Asia (CICA), adding that Turkey was working hard to develop good relations in all regions.

"The relations we have established with one country or region are never against each other or (out of spite to) third countries," Erdoğan said, adding that Turkey will "continue to strengthen these relations in the same way."

"We will try to develop relations in the west, east, north, and south," he said.

Stressing the importance of peace, stability, and cooperation in the world, Erdoğan noted that the world cannot ignore the ongoing war in Syria nor some 4 million Syrian refugees.

Erdoğan said he also drew attention to the regional and global impacts of the Syrian war and Turkey's political efforts to solve the problem during the summit.

"It is clear that unilateral approaches cannot produce a solution for peace and stability in the world today. I have seen that the leaders of the other countries participating in the summit have expressed this view strongly, like myself," Erdoğan said.

The president, commenting on the bilateral relations between Turkey and Russia which have been "at a very good state," noted that Turkey's current highest trade volume was with Russia and had recently surpassed 25 billion dollars.

Erdoğan also said the TurkStream pipeline will be inaugurated at the end of this year.

Touching upon the nuclear power plant construction that has been carried out in cooperation with Russia, Erdoğan said that a total of 200 engineers have been sent to Russia for training.

Erdoğan noted that with Putin they had also discussed the Ankara's S-400 missile deal with Moscow, adding that the issue was an "already closed one."

Regarding Turkey's relations with China, Erdoğan said both countries were planning to reach a trade volume of $50 billion as he had previously discussed with his Chinese counterpart.

Touching on the One Belt One Road Project, a modern Silk Road Project initiated by China, Erdoğan said that Turkey has been conducting bilateral meetings with relevant countries as Turkey's strategic location was highly important for the project, adding that the subject will also be discussed at the G20 Summit to be held in Japan's Osaka at the end of June.

Saying that the defense industry will also be a matter of discussion in bilateral meetings held with the G20 summit's participant countries, Erdoğan said that the recent developments regarding Turkey's defense industry were also a highly interesting subject during the summit in Tajikistan.

Answering a question about Turkey's response to the letter from the U.S. on S-400 missile systems, Erdoğan said that the National Defense Ministry will soon respond to it.

"Our decision is clear. We won't compromise on the S-400 issue," Erdoğan asserted, adding that it was the same for the F-35 issue as Turkey did what it had to do.

This issue will also be discussed in full detail with the United States President Donald Trump at the G20 Summit, he added.

Erdoğan expressed hope that this issue will soon be resolved as there should be no such problem between two strategic partners, and NATO allies.

Commenting on the Israeli-Palestinian issue, Erdoğan said Turkey had an important role as the term chairman of the Organization of Islamic Cooperation (OIC), criticizing the Arab League for not doing anything accountable on the Palestinian issue.

Regarding the U.S.-Iran crisis, Erdoğan said that they had mainly discussed bilateral economic relations at the summit.

Erdoğan stressed that the people living in Cyprus, Turks or Greeks, had equal rights and shares.

In response to questions about the upcoming re-elections and the Ruling Justice and Development Party (AK Party)'s People's Alliance with the Nationalist Movement Party (MHP), the president said that the alliance not only encompassed the local elections' period but also one that a process involves some works in parliament, adding that there is a good relationship between him and Devlet Bahçeli, the chairman of the MHP.

Turkey's Supreme Election Council (YSK) ruled on May 7 for a rerun of the local elections in Istanbul.

The YSK ruled seven against four in favor and annulled the results of the mayoral election in Istanbul. The renewed election will be held on June 23. The top election body also decided to file a criminal complaint against the chairman and members of the district election council, election managers and other persons responsible for appointing polling staffs unlawfully.

"When we look at the outcome of the March 31 election – the elected members, the commissions, and the president – the majority are from the People's Alliance. And now, there is only one (mayor) post left to choose (a representative for)," Erdoğan said, emphasizing that the whole truth should be shared with the people to ensure a healthy election period.

"Istanbul has no time to lose…Those who have asked what has been done in Istanbul in the last 24-25 years have probably never passed through the Eurasia Tunnel, used the Marmaray or the Third Bridge. In the past, there were no intersections or metrobuses in Istanbul. This government did this. Our candidate Binali Yıldırım has done a lot of work, spent serious effort on this city," he added.

Erdoğan also said that a live televised debate between Yıldırım and Ekrem Imamoğlu of the main opposition Republican People's Party on Sunday, June 16 at 9 p.m. may have a serious impact on people's choices "as citizens do not know who is who. There are those who build their campaign on lies, and there are those who build theirs on the truth. Now the citizens will (get to) see this."

Speaking of the measures taken against the irregularities that took place during the local elections, Erdoğan said that he himself had met with his party organization three times.

"I gave various warnings to our mayors, the provincial administration and district mayors," Erdoğan said adding that "First of all, it is very important that all records and proceedings regarding the ballot boxes and voter counting charts are recorded. There should be no exceptions."

Elections in Istanbul, where Nation Alliance candidate Ekrem İmamoğlu was awarded the certificate of mayorship with only a 13,729-vote difference, were followed by lengthy discussions and objections by parties demanding a do-over election due to irregularities and unlawfulness. After the elections, the AK Party submitted an extraordinary objection to the YSK for the Istanbul Metropolitan Municipality, Maltepe Municipality, and Büyükçekmece Municipality to cancel and redo the Istanbul municipal elections.

A probe of irregularities found that dozens of members of balloting committees were linked the Gülenist Terror Group (FETÖ), the group behind the 2016 defeated coup in Turkey.

Of 43 committee members allegedly linked to the FETÖ, 41 were found to be customers of Bank Asya, a FETÖ-linked bank, two were users of ByLock, the terror group's encrypted messaging app, and two were members of FETÖ-linked labor unions.

Commenting on the fact that the number of female journalists accompanying him throughout his visit to Tajikistan was more than those of previous trips, Erdoğan said: "I am a person who has always cared about the presence/representation and activeness of women in politics throughout my political life. I find it very valuable for women to be present throughout the social sphere in fields such as politics, especially in the media. If we need to give a message, this photo can be read as such."

Meryem İlayda Atlas is Editorial Coordinator of Daily Sabah. She is board member of TRT, the national public broadcaster of Turkey. Atlas also serves as a visiting scholar at Çanakkale Onsekiz Mart University.
Last Update: Jun 16, 2019 10:46 am
RELATED TOPICS