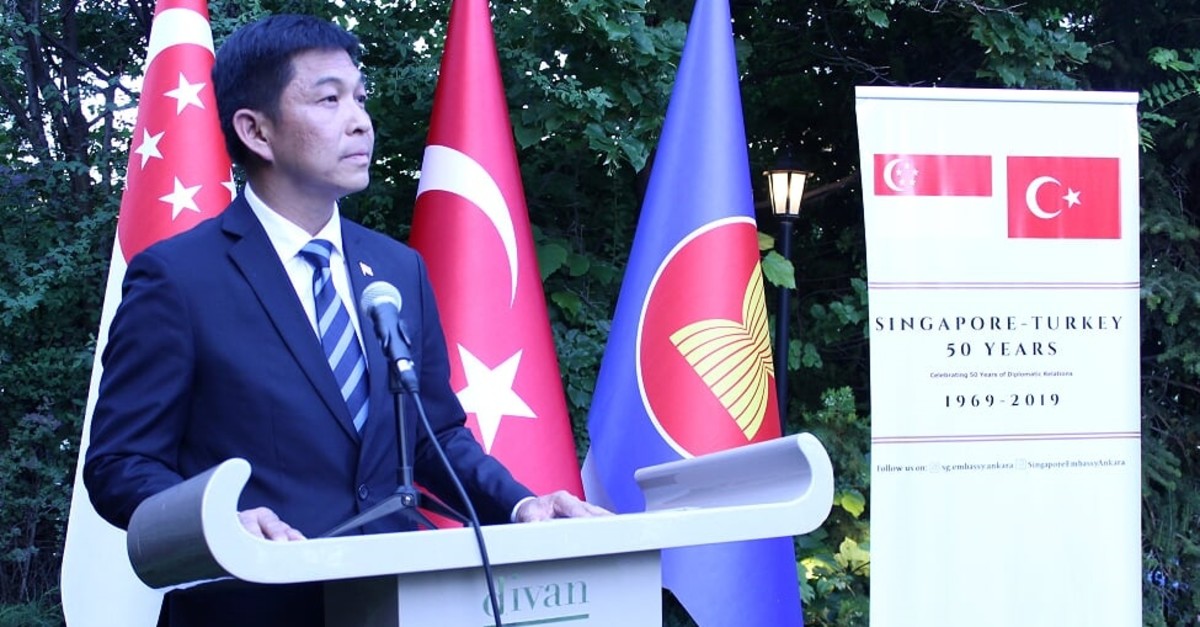 Underlining the warm relations and strategic partnership between the two countries, Singapore's speaker of parliament pointed out that both nations want to take their bilateral ties forward

Singapore's Speaker of Parliament Tan Chuan-Jin has been visiting Turkey this week to mark the 50th anniversary of the establishment of diplomatic relations between Turkey and Singapore. Accompanied by a delegation of five members of Parliament, Tan was received by Vice President Fuat Oktay, Speaker of the Parliament Mustafa Şentop and other high-level officials in Ankara. During his visit, the speaker gave an exclusive interview to Daily Sabah. Celebrating the 50th anniversary of Turkey-Singapore diplomatic relations, Tan said even though the two countries are geographically distant, their warm relations are encouraging.

"I am greatly encouraged to know that relations are warm, stable and growing. We have a strategic partnership [started in 2014] and free trade agreement [signed in 2017] with Turkey, which provides a good framework to take relations forward beyond the 50th anniversary" he said.

Visiting Turkey with his family, Tan also said that he did not expect to see many Singaporean tourists in Turkey. "I have not been in Turkey before. Intellectually, I know that Turkey has a very rich history, etc. I came a week earlier with my wife. I am just struck how much potential Turkey has," he added. 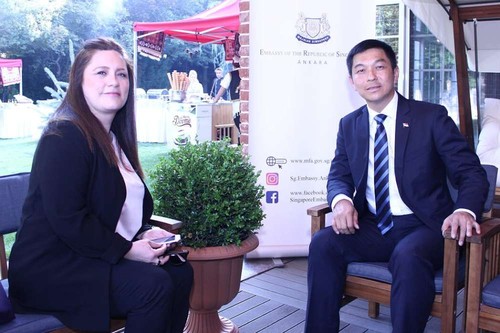 Emphasizing the fact that trade and investments are two important components in bilateral relations, the Parliament speaker said he believes Turkey and Singapore have the potential to surpass the current trade figures, which have amounted to more than $1 billion over the past three years.

"Both countries have ties. Singapore is a small country highly dependent on trade. Our trade is more than double our GDP. It is in our interest to increase this trade capacity, with Turkey as well, which is an important gateway to the region" he added.

For the investment aspect, Tan said there are a considerable amount of investment by Singaporean companies in Turkey. In addition, he also underlined that the Turkey-Singapore Free Trade Agreement may also expose the potential of bilateral trade and investments.

"For example, companies like PSA International, Olam Ltd [via Progıda] and Ascott Holdings are present in Turkey. We are also working to link startups to Singapore, encourage investments in fintech and e-commerce, and help connect Turkish companies to our Asian networks," he said. In Tan's view, however, one should not merely look at trade and investment as only the numbers. "We do need to consider the quality of investments and look to create value and businesses that can be nurtured and sustained over time. Overall, at present, I think we have a good balance of Singapore companies - those that bring their global networks to Turkey, and others that seek new opportunities in areas like e-commerce and fintech," Tan said.

Calling attention to "soft" areas like culture and people-to-people ties in bilateral relations, Tan reiterated the impact of the exhibition in Singapore 15 years ago, which included Turkish culture and heritage.

"I recall in 2004, there was a hugely popular exhibition in Singapore at the Asian Civilizations Museum that came from Topkapı Palace. This created significant buzz and interest in Singapore about Turkey. There is so much history in Turkey. I hope Turkey can consider bringing other interesting cultural exhibitions to Singapore, which will be seen not only by Singaporeans but potentially the other 16 million tourists that visit us," the Parliament speaker said.

Pointing out the number of Singaporean tourists visiting Turkey, Tan also underscored the importance of the recently signed memorandum of understanding (MoU) on archival and library collaboration between the two countries to understand the relations in the Ottoman era.

"We can also consider exhibitions that show how Istanbul and Singapore are global trade centers, past and present, or look at the magnificent artifacts from the Anatolian Civilization Museum, such as the Hittite civilization, to showcase the deep history of Turkey's past," he said, adding that there is much Turkey has to offer. "In 2018, there were about 28,000 Singapore tourists visiting this country. I myself have personally been a tourist and seen beautiful sights, learnt the history and culture of this great land. As partners, we have recently established a framework through two MoUs on archival and library collaboration. The aim is to better understand our past relations with the Ottoman Empire, and I believe uncovering these records will help develop a greater understanding of our history and interactions," he said.

Singapore open to opportunities in ASIA

Elaborating on joint trade, economics, tourism and investment projects in the near future between Turkey and Singapore, Tan stated that they are always open to opportunities in certain areas as well as in third countries.

Underlining Turkey's educated human resources, empowerment of women and work power, Tan also emphasized the importance of people-to-people interaction to boost bilateral ties. "We should not neglect the soft side of all relations" he said.

"For example, our companies can work with Turkish partners to tap into the ASEAN [Association of Southeast Asian Nations] market, and vice versa for Singapore to Turkey and this region. I understand that our trade ministries have some preliminary ideas to explore how to collaborate in the fintech, agriculture and technology sector," he underlined. "By combining the areas where we have a competitive advantage," Tan expressed, "our companies can certainly consider venturing into third countries together. For example, Singapore has experience in urban planning and design, and could partner Turkish construction companies in third countries. In newer areas, Turkish companies could ride on Singapore's e-commerce networks to enter other markets, and our fintech players can collaborate to bring joint ideas and solutions to third countries. We would also very much welcome Turkish companies using Singapore as a springboard to launch into our region. For example, Turkish startups can plug into Singapore's Week of Innovation and Technology [SWITCH] and the fintech festivals organized in Singapore to go regional. We hope to see Turkish delegations participating in these events in Singapore," he said.

Much to be explored for these two cultures

Commenting on the cultural heritage and commonalities that the two countries share, Tan also said there is a great deal of unexplored history between Turkey and Singapore to be uncovered.

"While Singapore is celebrating the 200th year since its founding by the British in 2019, Singapore's history dates back 700 years before. There would have been interactions between the Ottoman Empire and Southeast Asia. In fact, the Ottomans appointed an honorary consul general in 1865 and a resident consul general in 1901 in Singapore. That is an indication of the importance the Ottoman Empire placed in Singapore. So, there is much unexplored history that we need to uncover. Both sides should look back into the past and consider the narrative that we were two global trading hubs with longstanding connections. Uncovering such links from our historical records can certainly enhance people-to-people linkages," he said. "But going forward, one other area I think we can share common ground is the love for food, which I see helps bring people closer together. As part of my visit to Turkey, I will be launching several Turkey-Singapore fusion dishes in a reception in Istanbul that hopefully will bring our palates and taste buds together," the speaker added.