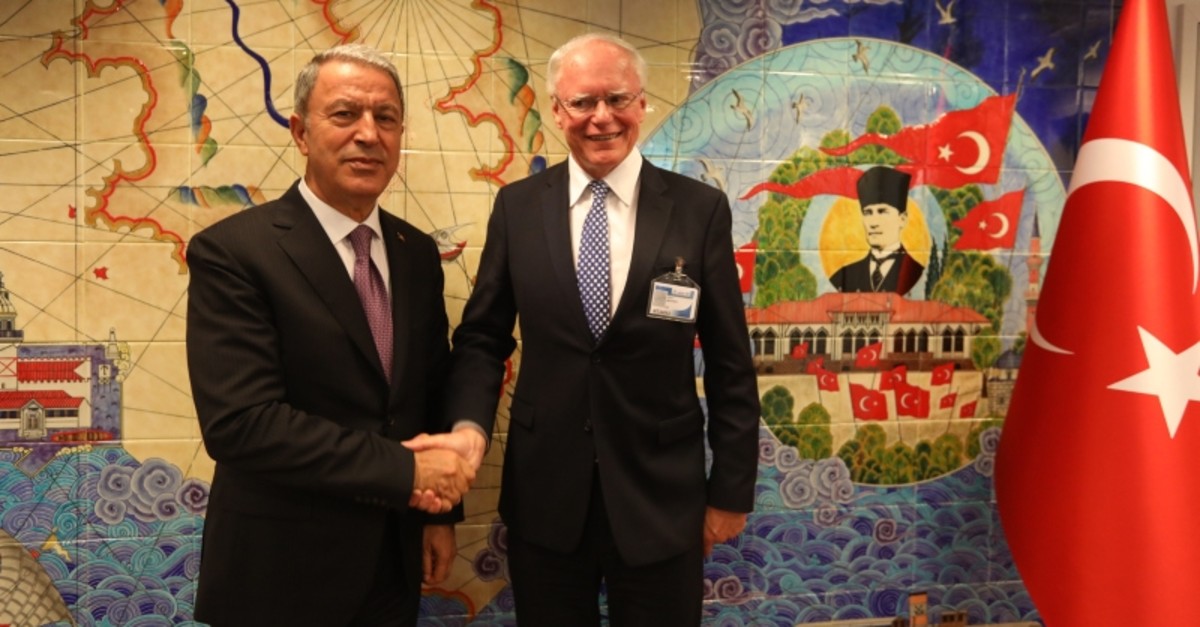 Turkey's defense minister and the U.S. special envoy for Syria discussed the situation in the northern Syrian town of Manbij and the area east of the Euphrates on Thursday, according to a statement from the Defense Ministry.

During their meeting at NATO headquarters in Brussels, Hulusi Akar and James Jeffrey also discussed the latest developments in Syria, the statement said.

Akar told Jeffrey that Turkey expected the U.S. to keep its promises regarding Manbij.

Last year, Ankara and Washington reached a deal stipulating the withdrawal of PKK-affiliate People's Protection Units (YPG) terrorists from the town for the stability of the region, located in the northern part of Syria's Aleppo province.

Akar reiterated Turkey's views for the formation of a safe zone east of the Euphrates, the statement added.

Turkey previously underlined that a safe zone in this area would need to be free of YPG terrorists and that the region's safety must be secured by Turkey.

Ankara reiterated that it will not allow PKK-affiliated groups to establish a terrorist corridor on its southern border that could threaten Turkey's border security and peace.

Turkey carried out two cross-border operations west of the Euphrates, Operation Euphrates Shield launched in August 2016 and Operation Olive Branch in January 2018, to drive terrorist groups, including the YPG and Daesh, from its borders.

This time, Turkey aims to drain the terror swamp near its border, protect Syria's territorial integrity and ensure political stability with a possible operation east of the Euphrates to eliminate YPG terrorism.

Turkey had long signaled a possible operation in areas held by the YPG east of the Euphrates. However, the government decided to postpone the operation after U.S. President Donald Trump decided that Washington, the main backer of the terrorist group, would withdraw its troops from Syria.

While Washington continues preparing for withdrawal despite dissident voices, it has been holding talks with Ankara and discussing a plan to form a safe zone. Turkey has stressed that the zone must be free of terrorists to ensure its border security and enable the return of Syrian refugees. The close U.S. partnership with the YPG since the former Barack Obama administration has always been a sticking point in Washington-Ankara relations. Turkey sees the YPG as an extension of the PKK, a group that has claimed the lives of more than 40,000 people in its 30-year terror campaign against Turkey. The U.S., however, while listing the PKK as a terrorist group, opted to continue its steadfast militarily support for the terrorist organization under the pretext of fighting Daesh, despite warnings that the YPG does not represent Syrian Kurds.