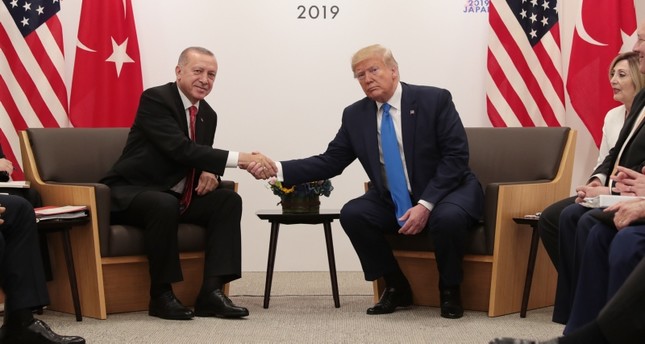 U.S. President Donald Trump said Saturday that Turkey "was not allowed to buy Patriot missiles by the Obama administration" and his administration is looking at different solutions regarding its purchase of Russia's S-400 missiles.

"Turkey is a NATO member and was not treated fairly," Trump said in a joint presser with President Recep Tayyip Erdoğan, referring to the Obama administration's reluctance to sell Patriots to Turkey in 2013.

Asked about possible sanctions against Turkey, Trump said "we are looking at it, but it's a two-way street".

Trump also touched on the trade volume between Turkey and the U.S., saying "$75 billion is small. I think it is going to be well over $100 billion soon."

He also said he will visit Turkey this year. Asked if it will be in July, he said the date is not set yet.

"… Above all, we have a strategic partnership, which promotes our cooperation in various fields," Erdoğan said, adding he believed this cooperation would continue in the same manner in the coming period.

In his brief statement following the meeting, Erdoğan said countries' trade volume goal was $75 billion and both countries had steps to be taken in the direction of the defense industry.

It was stated that Erdoğan expressed Turkey's determination to fulfill requirements of national security to U.S. president, and shared his concerns on the efforts that might harm countries' strategic partnership.

The G20 Leaders' Summit, followed by more than 2,000 journalists from around the world, is being attended by 30,000 people, including 19 leaders and delegates from the European Union.

Share on Facebook Share on Twitter
Previous in Diplomacy "The US supports Turkey's efforts to maintain the Idlib ceasefire... Next in Diplomacy U.S. President Donald Trump pinned the blame for the row between the...
DAILY SABAH RECOMMENDS