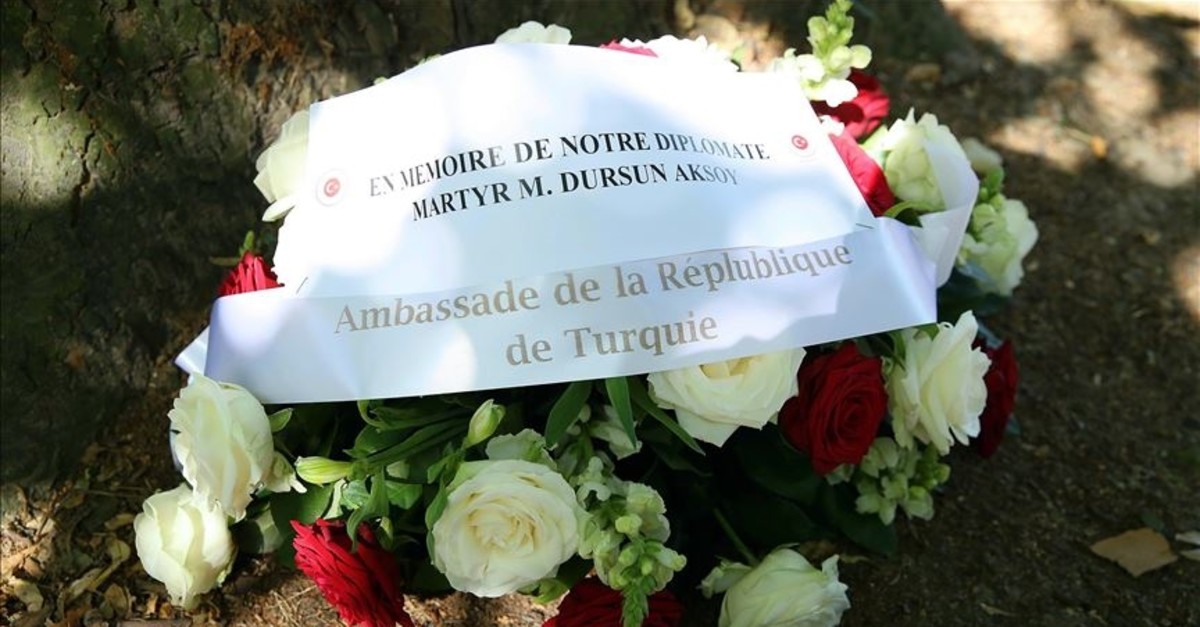 Turkey on Sunday commemorated a diplomat who lost his life in 1983 in Brussels, gunned down by an Armenian terrorist on the street outside his home.

Dursun Aksoy was born in 1944, in the village of Islamköy in the southwestern Turkish province of Isparta.

In November 1976, Aksoy joined the Foreign Ministry, and three years later, he was appointed to Turkey's Embassy in Brussels as an administrative attaché.

A father of three, Aksoy was scheduled to return to Turkey in October 1983 -- the same year his youngest son turned 4.

The 39-year-old Turkish diplomat died at the scene, martyred on the job.

"I was looking out the window," said eyewitness Serge van Peborrgh about the assassination "I saw the victim getting behind the wheel. There was a person standing outside the car. At that moment, I heard two shots.

"I didn't know what happened. The victim was left where he was. The attacker quickly fled the scene."

Three Armenian terrorist groups took responsibility for the murder -- the Armenian Secret Army for the Liberation of Armenia (ASALA), the Justice Commandos of the Armenian Genocide (JCAG), and the Armenian Revolutionary Army (ARA).

After an Armenian suspect was arrested in the Netherlands, the eyewitness was brought to the country and identified him. Belgium then secured his extradition.

In Belgium, he was expected to be convicted, but a number of witnesses supplied with him an alibi, saying he was in France on the day of the assassination. His subsequent release provoked great indignation in Turkey.

Although Belgian authorities pledged that the investigation would continue, today -- over 35 years later -- no other suspects have been apprehended, and Aksoy's killer remains unpunished.

When Ömer Aksoy, the martyred diplomat's father, heard the terrible news about his son on the radio, he immediately came to the capital, Ankara.

"We welcome Armenians with open arms in Turkey. They're shooting us out there," he said.

Some 31 Turkish diplomats and public servants were killed worldwide by Armenian terrorist groups between 1973 and 1986, according to Armenian Terror, a 2007 study by late Ambassador Ömer Engin Lutem, also a scholar of Armenian studies.

The killings occurred in a host of countries around the world, including the U.S., Britain, Austria, France, Italy, Belgium, Vatican City, Spain, Lebanon, Greece, Switzerland, the Netherlands, Australia, Canada, Portugal, and Iran.

The study said that Armenian churches and political parties, feeling threatened by the assimilation of Armenians who moved abroad, decided to revive extremist national emotions to prevent assimilation and to protect their identity.

In recent years Armenian propaganda has gotten less interest in the international arena, an expert on Armenian terrorism told a conference held in Ankara this May.

Although the Armenian lobby tried to fuel media speculation that President Donald Trump would call the events of 1915 a "genocide," in fact he did not, said Christopher Gunn, a professor at Coastal Carolina University in the U.S. state of South Carolina.

Gunn added that the popularity of Armenian propaganda is shrinking.

At the conference, Gunn also spoke about Armenian terrorists who were involved in international terrorism such as Soghomon Tehlirian, Gourgen Yanikian, and Monte Melkonian, who are behind the killing of several Turkish diplomats and their relatives in various parts of the world.

ASALA and other Armenian terrorist groups have cited the so-called "genocide" of 1915 as a pretext for their murderous campaigns.