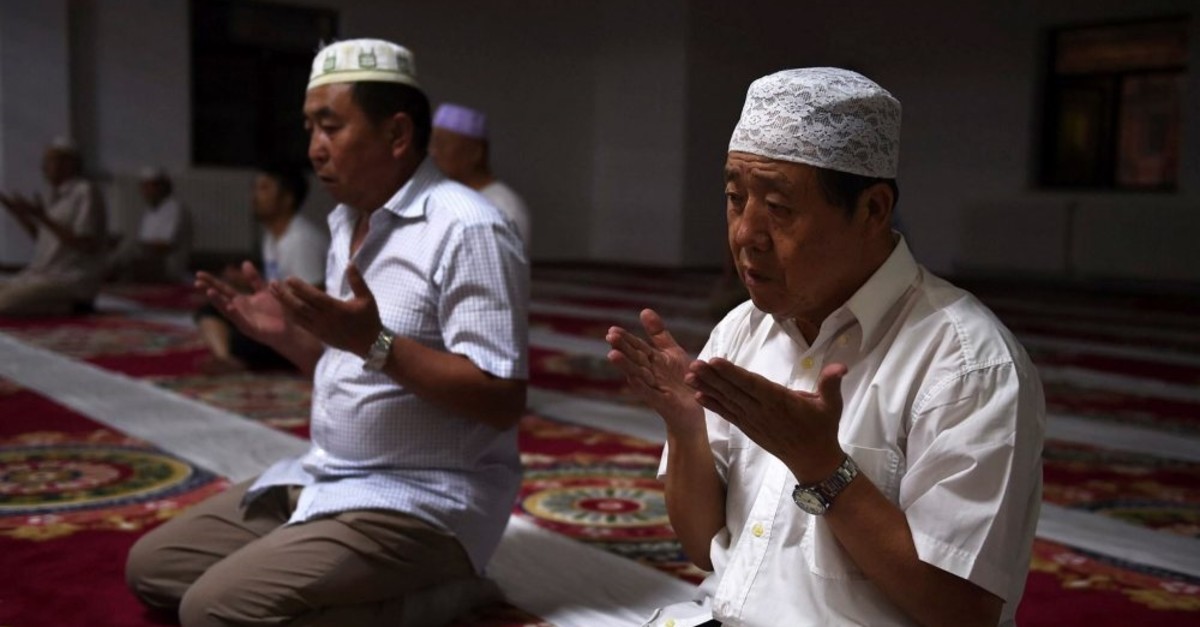 Two Uighurs pray in a mosque in Xinjiang where the oppressive policies of the Chinese government toward the Uighur minority have drawn criticism from the international community.
by Daily Sabah with AA Jul 31, 2019 12:21 am

Upon invitation from China to alleviate concerns over the Uighur community, Turkey is preparing to send an observer delegation to the Xinjiang Uighur Autonomous Region

Speaking to the Anadolu Agency following his diplomatic contacts within the scope of the 52nd ASEAN (Association of Southeast Asian Nations) Foreign Ministers Meeting, which began on Saturday in Bangkok, runs through Saturday, Çavuşoğlu talked about the situation of Uighurs living in China.

Touching upon Uighurs' problems in China, Çavuşoğlu said: "Our only expectation is that our Uighur brothers live in peace under the roof of a single China."

Reminding that the issue of Uighurs was discussed during the President Recep Tayyip Erdoğan's visit to China, Çavuşoğlu added: "During our president's visit, Chinese president offered us to send a delegation to the region from Turkey. Later on July 24, the Chinese Embassy officially transmitted this invitation when they came to our ministry. Our president unofficially accepted this invitation. Now, we will send a delegation consisting of nearly 10 people from various institutions to the region upon this invitation and they will observe the situation there."

President Recep Tayyip Erdoğan was in Beijing early this month on an official visit, during which he met with his Chinese counterpart Xi Jinping to weigh in on mutual issues concerning the two countries and exchange views on ways to further strengthen economic and political ties.

The Republic of Turkey is a strong supporter of the Belt and Road Initiative, President Recep Tayyip Erdoğan told Chinese daily the Global Times in an opinion piece published during his visit to China.

"The centuries-old cooperation between our nations continues to grow stronger today thanks to the BRI under the leadership of Xi Jinping, China's president and my dear friend," Erdoğan said.

After the meetings, Çavuşoğlu also shared a Twitter message saying: "W/FM Wang Yi of #China, discussed bilateral issues, including energy and investments. Considered the situation of Uyghur Turks. Will send an observation delegation to #Xinjiang upon invitation of the Chinese authorities."

China's western Xinjiang Uighur Autonomous Region is home to around 10 million Uighurs. The Turkic Muslim group, which makes up around 45% of Xinjiang's population, has long accused China's authorities of cultural, religious and economic discrimination.

China has faced an outcry from activists, scholars, foreign governments and U.N. rights experts over what they call mass detentions and strict surveillance of the mostly Muslim Uighur minority and other Muslim groups who call Xinjiang home.

In its last report released on last September, Human Rights Watch blamed the Chinese government for a "systematic campaign of human rights violations" against Uyghur Muslims in northwestern Xinjiang, an autonomous region in the country.

Turkey has in the past called on China to respect the fundamental rights of Uighur Turks and to shut down concentration camps.