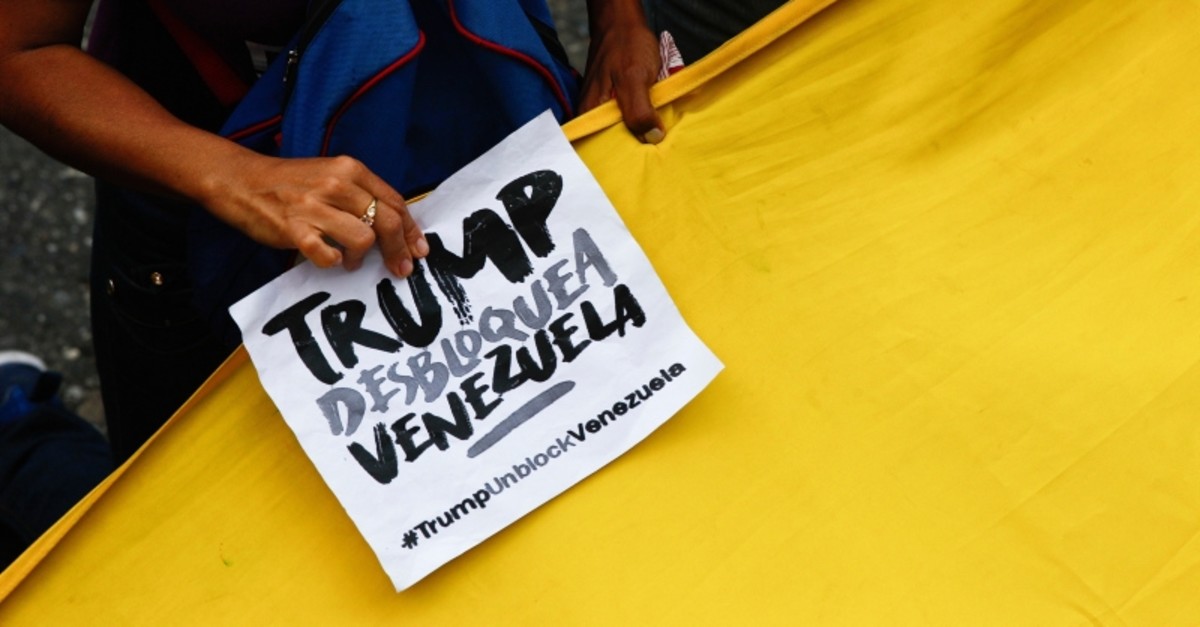 A government supporter holds a sign with a message that reads in Spanish: ,Trump unblock Venezuela, during a protest against U.S. sanctions, in Caracas, Venezuela, Wednesday, Aug. 7, 2019. (AP Photo)
by Daily Sabah with AA Aug 09, 2019 11:34 pm
Ankara objects to Washington's move earlier this week to place more sanctions against the Venezuelan government, the Turkish foreign ministry said Friday.

"We disapprove the U.S. Executive Order 'Blocking Property of the Government of Venezuela' envisaging comprehensive sanctions on Venezuela signed on 5 August 2019, at a time when talks facilitated by Norway were continuing in Barbados between the Venezuelan government and the opposition," said spokesman Hami Aksoy in a statement.

He said Turkey is concerned sanctions would worsen the economic hardship already faced by Venezuelans and negatively impact initiatives aimed at finding a political solution in the country.

"In this regard, we would like to reiterate once again that in order to find a lasting solution, all parties need to continue contributing to the political dialogue process," he said.

On Monday, the U.S. President Donald Trump signed an executive order freezing all property and interests in property of the government of Venezuela in America so that it "may not be transferred, paid, exported, withdrawn, or otherwise dealt in."

Venezuela has been in turmoil since rocked by instability since opposition leader Juan Guaido declared himself acting president days after Nicolas Maduro was sworn in as president in January.

The U.S. and many European and Latin American countries have supported Guaido. Russia, Turkey, China, Iran, Bolivia and Mexico have thrown their weight behind Maduro.