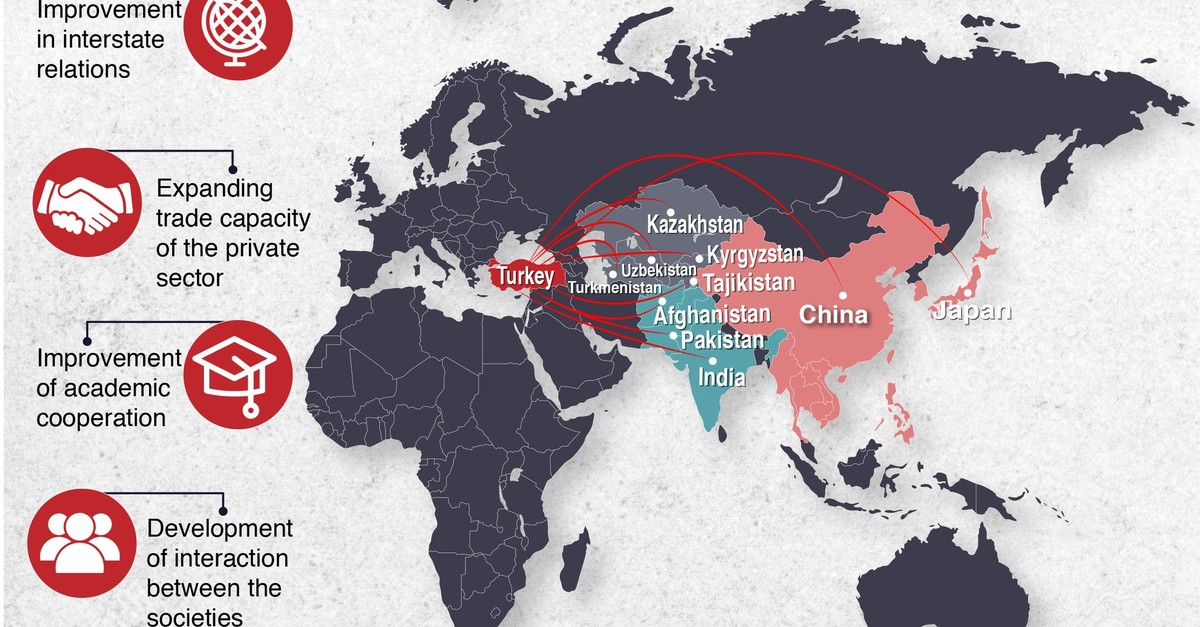 Turkey is diversifying its foreign policy by launching the Asia Anew initiative, a move that is seen as ‘belated but correct' by the experts

This week witnessed the revelation of an upcoming route for Turkish foreign policy as the 11th Ambassadors' Meeting took place in the capital province of Ankara, with state authorities presenting the main agenda of the country through a series of speeches. As a NATO member state that has strong ties and history with the EU and a critical presence in some of the major crises in the world, the usual Turkish diplomatic topics were on the table throughout the meeting, including ties with the U.S., Turkey's approach toward Europe, the migration crisis and close relations with Russia. One topic, however, came the forefront in the meeting since it offers a new vision that might shape the future of Turkish foreign policy as a whole: the Asia Anew initiative.

The new initiative was officially announced Monday by the Foreign Ministry as an aim to improve ties with Asian countries in different regions that would include cooperation in education, the defense industry, investments, trade, technology, culture and political dialogue. While the move was welcomed by many, it also created a wave of surprise, merely due to Turkey's traditional stance that almost always faces toward the Western world. However, according to experts, this is actually a long-awaited move by the country as trends worldwide necessitate such initiatives. "The importance of Asia, especially in terms of economy, is nonnegotiable," said Altay Atlı, an Asia-Pacific expert and academic at Koç University. "The economy of Turkey has been mostly integrated into the West so far, but today the country is in search of diversity in its economic partnerships."

By opening itself toward both Europe and Asia, Turkey is aiming to be a global actor," he added.

Aware of the issues, Turkey's new initiative consists of four main pillars – improvement of interstate relations, expanding the trade capacity of the private sector, improvement of academic cooperation and development of interaction between the societies.

According to Fatih Oktay, the author of the book "China: The New Great Power & Changing World Balances" and an academic, the move is a rational decision that is expected from a rational country in today's globalized world.

"The heavy weight of the world economy was at the Western side of the spectrum until very recently. Now, this balance has shifted. While the West has been struggling with economic problems, the East continues to grow very fast. A shift in political balance also follows this economic shift, although it occurs much slower," he said, adding that while the world becomes a scene for such shifts, it was expected that Turkey would engage in such an initiative.

"It is even a bit late to launch this initiative. In my opinion, this is a belated but right move for Turkey," he underlined.

However, it should be noted that this is not a first for Turkey as the country has been aiming to be engaged in the region through various projects and bilateral meetings. For instance, the country has been strengthening its ties with the Association of Southeast Asian Nations (ASEAN). Turkey considers it a key organization in its region, considering its combined economy, dynamic population and strategic location. Turkey applied to become a sectoral dialogue partner for ASEAN in 2015, and its application was accepted on Aug. 5, 2017 during the 50th ASEAN Foreign Ministers Meeting held in the Philippines. Pakistan, Switzerland and Norway are also sectoral dialogue partners of ASEAN. There are also projects like the Belt and Road Initiative (BRI) with China and various trade relations with many other regional countries. Bilateral visits have also increased in recent years. One of the most rece

nt was President Recep Tayyip Erdoğan's visit to China, following his attendance of the G20 summit in Japan. Turkey also hosts many Asian leaders, with the most recent being Malaysian Prime Minister Mahathir Mohamad, who expressed a desire to boost ties further.

STRATEGY IN ASIA"It is true that Turkey has been interested in Asia for quite some time now. However, the country was in need of a holistic Asia strategy, which handles the region through a road map as a whole. So, this Asia Anew is actually a plan that prepares a frame for Turkey's Asia strategy," Atlı said. In Atlı's opinion, the biggest difference with this initiative is it will provide a holistic approach that enables coordination between different state organizations and their engagement with the region.

The BRI has two main branches to connect China to Europe, with the first being the Silk Road Economic Belt, which includes countries in Central and South Asia. It starts in Xian and then goes through countries such as K

"all these institutions were lacking coordination and thus were not able to provide enough added value. That is to say, through this initiative all these actors will be brought together, and there will be coordination between them."

While Turkey is approaching the region with great enthusiasm, the regional countries also seem eager to welcome Turkey as they see the country as a passage to Europe due to its geopolitical position.

"These are rational moves and relations. The eastern side of the spectrum has always been known as the slower, more rational one that moves with long-term strategies," said Oktay. "Of course, there are many countries in Asia that have political variety with each other. However, if we talk about China, for instance, we can confidently say that it is not affected by instantaneous political developments. They always go after long-term strategies that would benefit both sides," he further underlined. In Atlı's opinion, however, Asia already has interest in Turkey.

"For them," he said, "Turkey is a door that opens to both Europe and the Middle East. Why does China have a partnership with Turkey in the Belt and Road project? Because it wants to reach Europe and cannot achieve this without Turkey."

"The thing Turkey has to do is strengthen its position as a bridge between Asia and Europe. That is to say, although Europe's abutment of the bridge was already strong, the other abutment, the Asia one, was in need of reinforcement. Turkey is handling that situation right now," he emphasized.

NOT an AXIS SHIFTHowever, despite Turkey's diversification attempts and the nature of the 21st century world order, critics still claim such initiatives suggest the country's alienation from the Western world. In his recent speech on the initiative, Foreign Minister Mevlüt Çavuşoğlu underlined that Turkey's main goal with the Asia Anew initiative was not an "axis shift."

"Now our Western friends will start complaining again saying, 'What's going on? Is it an axis shift in your foreign policy? Has Turkey turned its back on Europe and looking elsewhere?' Then let me ask you this: 'Do you shift the axis of your foreign policy when you go there [Asia]? Why does it become an axis change when Turkey goes there?'" Çavuşoğlu said, adding that Turkey is the axis itself.

Turkey's efforts to strengthen ties with diverse organizations and countries have often been mistakenly interpreted as a shift of axis that stems from the country's strained ties with the U.S. and its EU accession process, which has reached an impasse.

However, Turkish officials underline that Turkey values its allies and at the same time aims to increase the number of its partners in the international arena. Ankara has been stressing that enhancing ties with a specific country does not necessarily mean giving up on its current allies.

Yet, Atlı expressed that the initiative would affect the ties with the West positively.

"The year is 2019," Atlı said. "We are living in a global world. In such a world, no country has to make a choice between the West and the East. In these situations, criticism mostly claims that the axis of Turkey has shifted; however, the ones who make this criticism from the West are usually the ones who have the largest trade volume with Asia, such as the U.S."

"In such a world, you can't simply ignore Asia," he emphasized.