No changes in Turkey's Syria safe zone plans with US, military chiefs arrive at border to inspect troops 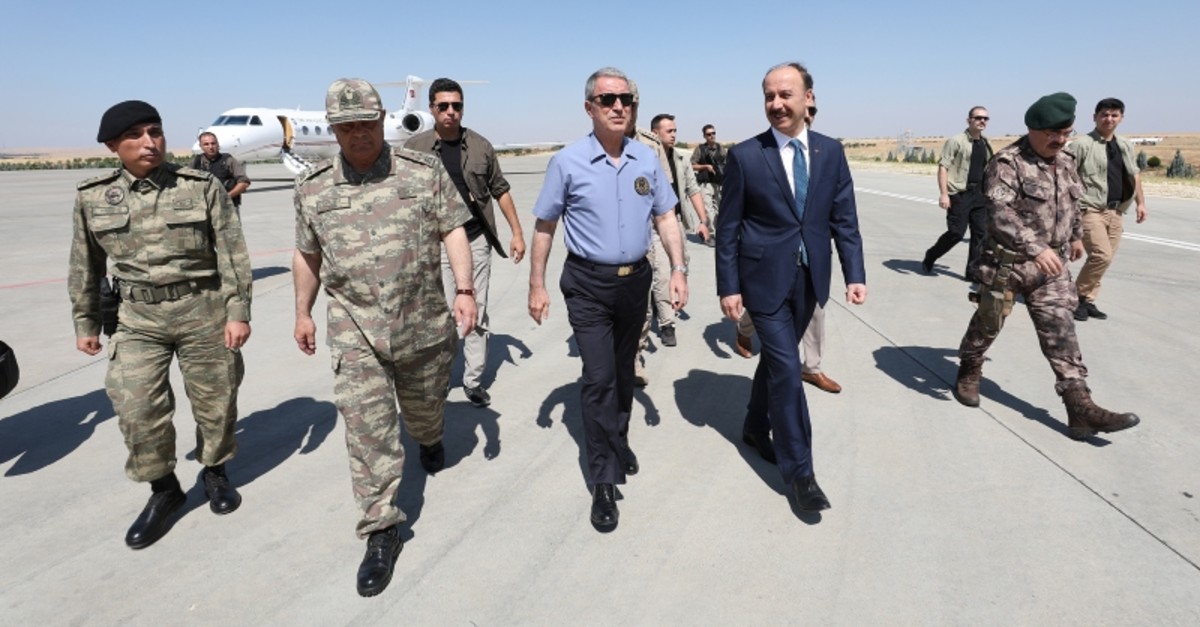 The Turkish National Defense Ministry on Thursday stated that there are no changes in its stance about the safe zone planned to be established in coordination with the U.S.

The news as reported by some media allegedly sourced information to Turkish and U.S. officials does not reflect the truth on the safe zone, which is planned to be implemented in coordination with the U.S. in northern Syria, the ministry said on Twitter.

"Activities carried out in coordination with the U.S. are announced to the public at the right place and time by the National Defense Ministry. In this context, Turkey has no change in its stance it previously announced," the ministry said.

Meanwhile, Turkish military chiefs arrived at the country's southeastern border on Friday to inspect troops ahead of the planned safe zone.

Defense Minister Hulusi Akar along with Chief of General Staff Gen. Yaşar Güler, and commanders of the land, air and naval forces arrived at the southeastern city of Şanlıurfa to inspect troops preparing for the setup of a Turkish-U.S. Joint Operations Center.

The team was welcomed by high-level commanders at the city's airport.

The joint Turkish-U.S. operation center to establish and manage the safe zone will be fully operational next week, Defense Minister Akar said Friday.

Ankara and Washington have also agreed in general terms about the control and coordination of air space in the region, Akar added.

A six-member U.S. team also arrived at the southeastern province on Aug. 12.

Turkey's Foreign Minister Mevlüt Çavuşoğlu said on Thursday that the preliminary Turkey-U.S. agreement on a safe zone is just the beginning and many topics need detailing, adding that the U.S. will not be able to stall Ankara on the establishment of a safe zone in northern Syria as they did with the Manbij deal.

He said: "The aim here is to establish a safe zone and [U.S. President Donald] Trump made a promise for [a depth of] 20 miles [32 kilometers]," adding that the region could only be "safe" after it was cleared of the PKK and its Syrian affiliate, the People's Protection Units (YPG).

Noting that Turkish unmanned aircraft had begun flights over the region, Çavuşoğlu underlined that observation points would be erected and joint patrols conducted in the area.

The U.S. has primarily partnered with the YPG in northeastern Syria in the anti-Daesh fight. Turkey strongly opposes the YPG's presence in Manbij, which has been a major sticking point in strained Turkey-U.S. relations, due to the latter's support for the YPG under the pretext of fighting Daesh. The U.S. has provided military training and given truckloads of military support to the YPG, despite its NATO ally's security concerns.

Turkey previously conducted two offensives into Syria, against Daesh and the YPG, in 2016 and 2018. Operations Euphrates Shield and Olive Branch liberated the region from the YPG, PKK and Daesh terrorists, allowing hundreds of thousands of displaced civilians to return to their homes.

The YPG is the Syrian offshoot of the PKK terror group, which has been responsible for the deaths of nearly 40,000 people in Turkey, including many children, women and infants, for more than 30 years.