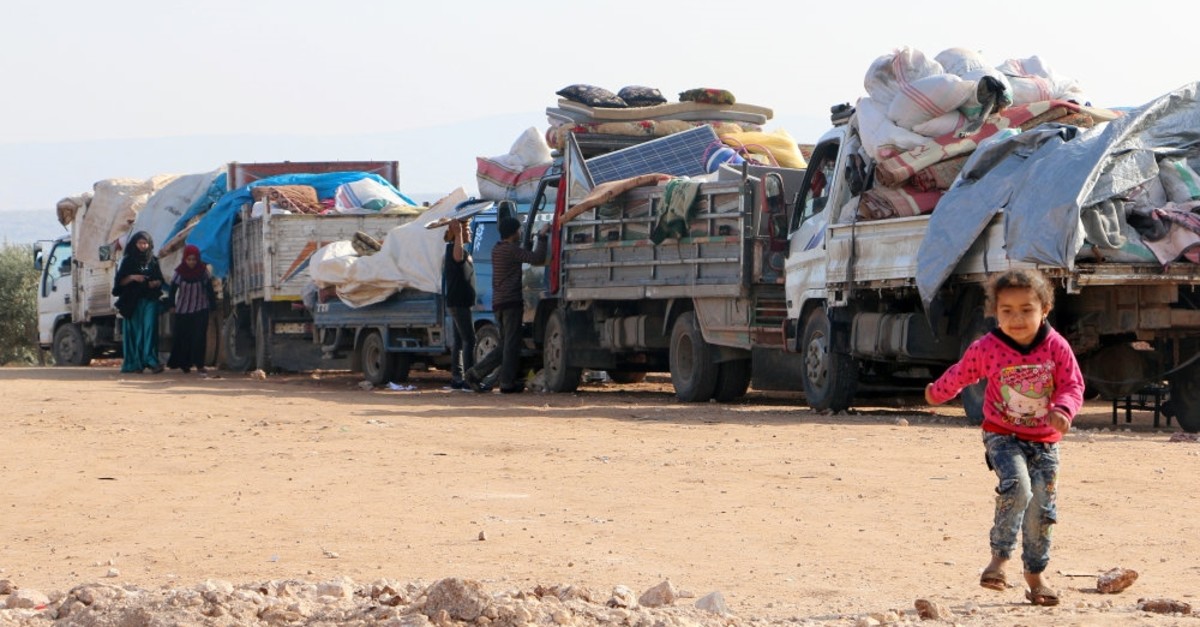 Syrians who had to leave their hometowns hope the planned safe zone will enable them to return home.
by Daily Sabah Aug 17, 2019 12:13 am

The planned safe zone to be established by Turkey-U.S. cooperation in northern Syria brings hope for Syrians who have had to leave their homes due to occupation by terrorist groups. The displaced Syrians said that they wish for the establishment of the safe zone as soon as possible and to be able to return home. Syrians that settled in southeastern Şanlıurfa's Akçakale district spend most of their days along the border looking at their homes, which are only a mere hundred meters away in many cases but still out of reach. Thousands of civilians coming from northern Syria's Tal Abyad, which was once under the rule of the Daesh and PKK-affiliated People's Protection Units (YPG) terrorists and liberated by Turkey's Operation Euphrates Shield in 2016, settled in Akçakale due to forced displacement. This wave of civilians seeking refuge in Turkey has continued since the Syrian civil war broke out in 2011, currently constituting a number of around 5 million. Upon hearing the news of the Turkey-U.S. safe zone plan, the people of Tal Abyad continue their daily lives in Akçakale but go to the border in their spare time with the excitement of new hope.

"The meetings with the U.S. gave us hope," said Mustafa al-Nasser, who settled in the district after having to leave Tal Abyad six years ago together with his children. Expressing that his only wish was to return home, he explained that their homes, lands and workplaces were used by terrorists and the city was occupied. "We are just 1 kilometer away from our home, however, all our assets are seized by the terrorists currently. We want to return to our homes and lands. We want the safe zone to be set up without delay. We do not trust the U.S. but Turkey's presence pleases us and gives us hope," he added. Also pointing out that every kind of support has been shown to them while they are staying in Turkey, he thanked the Turkish government.

Besides sending humanitarian aid and trucks with the necessary equipment, the Turkish government has hosted the highest number of Syrian refugees in the world by ensuring education, health and social rights. In May 2011, Turkey set up its first camps for the refugees and began to help them build a life in Turkey like normal citizens. Turkey has undertaken a very tough responsibility to take in and care for refugees who are trying to hold onto life, rebuild their lives and look to the future.

"I have still relatives in Tal Abyad and unfortunately they are maintaining their lives under the pressure of terrorists. I miss them, my country and my city; the first thing I will do upon upon returning, is to fill the gas tank up and drive around the streets until its empty," says Hussain al Saleh, who works as a driver in Akçakale currently.

Speaking on the safe zone plan, Syrian Turkmen Assembly President Muhammad Vecih Cuma stated, "People are waiting for the region to be cleared of terrorists because these organizations have hijacked the homes and assets of these people, burned down their fields and forcefully taken their children to make them fight." After the region is rendered safe, hundreds of thousands of Syrians will return to their homes just as in the case of the regions cleared by Operation Euphrates Shield and Operation Olive Branch.

"Our sole wish is that the security in the region is truly established. For this to happen, it is obligatory that the terrorists and their weapons are eliminated. The problem cannot be solved if they are pushed further away," Cuma said, adding that a depth of 32 kilometers for the safe zone was of vital importance for the stability and security of the region.

Turkey's Foreign Minister Mevlüt Çavuşoğlu said on Thursday that the preliminary Turkey-U.S. agreement on a safe zone is just the beginning and many topics need detailing, adding that the U.S. will not be able to stall Ankara on the establishment of a safe zone in northern Syria as they did with the Manbij deal.

He said: "The aim here is to establish a safe zone and [U.S. President Donald] Trump made a promise for [a depth of] 20 miles [32 kilometers]," adding that the region could only be "safe" after it was cleared of the PKK and its Syrian affiliate, the People's Protection Units (YPG). Noting that Turkish unmanned aircraft had begun flights over the region, Çavuşoğlu underlined that observation points would be erected and joint patrols conducted in the area.

The Turkish National Defense Ministry on Thursday stated that there are no changes in its stance about the safe zone planned to be established in coordination with the U.S. The news as reported by some media allegedly sourced information to Turkish and U.S. officials does not reflect the truth on the safe zone, which is planned to be implemented in coordination with the U.S. in northern Syria, the ministry said on Twitter.

"Activities carried out in coordination with the U.S. are announced to the public at the right place and time by the National Defense Ministry. In this context, Turkey has no change in its stance it previously announced," the ministry said.

Meanwhile, Turkish military chiefs arrived at the country's southeastern border on Friday to inspect troops ahead of the planned safe zone. Defe

nse Minister Hulusi Akar along with Chief of General Staff Yaşar Güler, and commanders of the land, air and naval forces arrived at the southeastern city of Şanlıurfa to inspect troops preparing for the setup of a Turkish-U.S. Joint Operations Center. The team was welcomed by high-level commanders at the city's airport. It was also reported yesterday that the Joint Operations Center will begin working at full capacity next week.A six-member U.S. team also arrived at the southeastern province on Aug. 12.

"The Joint Operations Center is projected to start functioning in the coming days," the National Defense Ministry said in a statement following the arrival of the U.S. delegation.

The U.S. has primarily partnered with the YPG in northeastern Syria in the anti-Daesh fight. Turkey strongly opposes the YPG's presence in Manbij, which has been a major sticking point in strained Turkey-U.S. relations, due to the latter's support for the YPG under the pretext of fighting Daesh. The U.S. has provided military training and given truckloads of military support to the YPG, despite its NATO ally's security concerns. To reduce tensions, Turkey and the U.S. agreed on a road map in June 2018 foreseeing the withdrawal of the YPG from Manbij and installing joint Turkish-American patrols, which began in November. However, the process has been sluggish as the terrorist group was still present in the city despite the three-month timetable set for implementing the deal.

Turkey previously conducted two offensives into Syria, against Daesh and the YPG, in 2016 and 2018. Operations Euphrates Shield and Olive Branch liberated the region from the YPG, PKK and Daesh terrorists, allowing hundreds of thousands of displaced civilians to return to their homes.

The YPG is the Syrian offshoot of the PKK terror group, which is recognized as a terrorist organization by Turkey, the EU and the U.S. and has been responsible for the deaths of nearly 40,000 people in Turkey, including many children, women and infants, for more than 30 years.