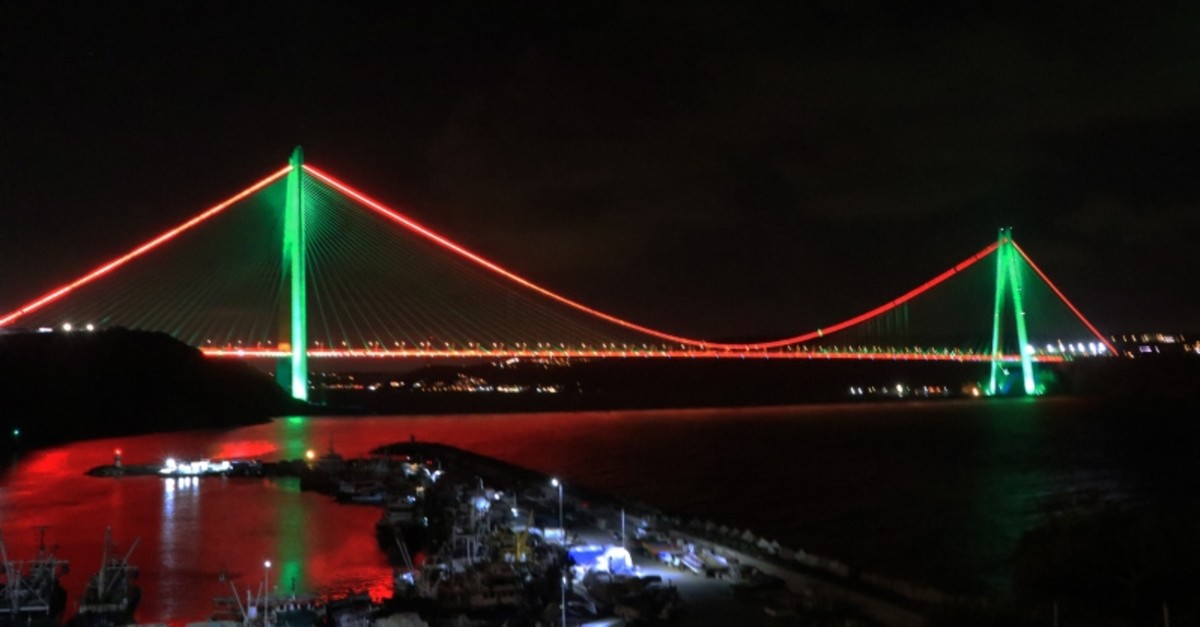 The Afghan Embassy in Turkey on Monday celebrated the 100th anniversary of the country's independence at a reception with the attendance of Turkey's vice president, defense minister and chief of General Staff, among other top officials.

Speaking at the event in the capital Ankara, Vice President Fuat Oktay said that he is happy to celebrate Afghanistan's centenary with the people of the country, whom Turkey sees as friends and brothers. 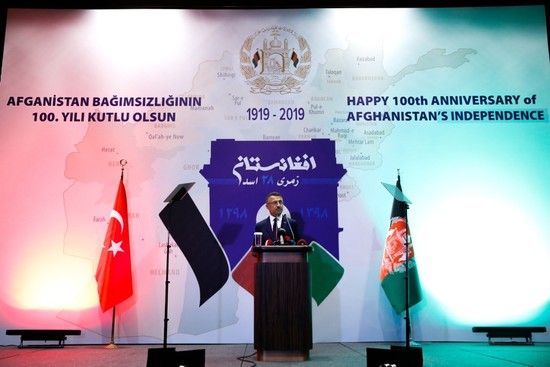 Oktay also condemned a Daesh-claimed weekend bombing at a wedding in Afghanistan which claimed at least 63 lives.

"Once again I condemn all kinds of treacherous terror attacks which lack any conscience, language or religion, and express my condolences to all the Afghan people," said Oktay.

"As a country which has been combating terrorism for many years, we continue our struggle at home and abroad with determination," Oktay said, wishing success to Turkish soldiers and security forces now carrying out Operation Kıran against "the bloody terrorist group PKK."

Turkish security forces on Monday launched an operation against the PKK terror group in the country's east and southeast. In its more than 30-year terror campaign against Turkey, the PKK -- listed as a terrorist organization by Turkey, the U.S. and the EU -- has been responsible for the deaths of some 40,000 people, including women, children, and infants. 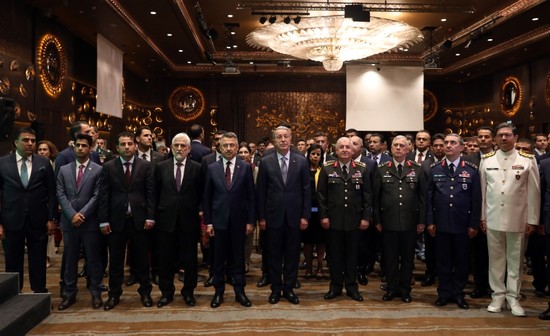 Afghanistan's ambassador to Turkey also praised Turkish-Afghan ties, which date back more than a century.

"Turkey was one of the first countries to recognize Afghanistan's independence from the British Empire," said Abdul Rahim Sayedjan.

"Turkey has played a vital role in providing support to the people of Afghanistan in areas such as humanitarian assistance and reconstruction of the country," he added.

Sayedjan went on to say that Afghanistan is still struggling to protect its independence.

He also said the doors of negotiation and peace were always kept open in the struggle against the Taliban.

"We look forward to direct peace talks between the Taliban and the Afghan government in the near future," he said.

"However, we cannot jeopardize our significant achievements over the last 20 year on issues such as education, health, urbanization, media, women's participation in business and human rights in these talks," he added. 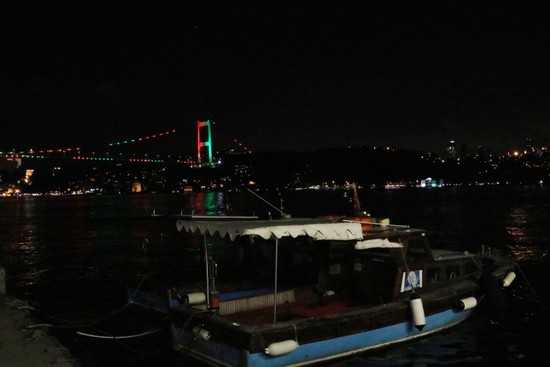 Meanwhile, a number of landmarks in Istanbul, Turkey's largest city, were illuminated in red and green on Monday to mark the centennial.

Aug. 19 commemorates the end of British control over the country's foreign policy after three Anglo-Afghan Wars in the 19th and 20th centuries that also compelled the then-Afghan rulers to acknowledge the Durand Line as a border between Afghanistan and then-British India.

Based on centuries-long cultural, political, economic and religious ties, Turkey and Afghanistan enjoy cordial relations dating back to the 19th century. The Ottoman Empire was among the few countries that helped Afghanistan in its struggle against the British. When Turkish nationalists were waging the War of Independence against WWI Allies led by Britain, Afghan and Indian Muslims donated a significant sum of gold, which is still remembered by the Turkish public. Afghanistan was the second country to recognize the Republic of Turkey after the Soviet Union. Starting from the early 1920s to 1970s, the two countries enjoyed close ties and cooperation, with Ankara being among the primary backers of Kabul's efforts to modernize the country.

Following the Soviet invasion in the late 1970s, Turkey supported several moderate mujahideen groups. With the Taliban's takeover of much of Afghanistan in 1996, Ankara became one of the primary backers of the Northern Alliance in its fight against the radical group. Since the U.S. invasion in 2001, Turkey is among the main contributors to the NATO-led International Security Assistance Force (ISAF) established by the U.N., although taking part solely in non-combat civilian missions.

At home in Afghanistan, the war-weary country marred by years of raging conflicts, Afghans marked the centenary of independence Monday at yet another historic crossroads.

A roadside flag vendor in the capital Kabul, Hayatullah Khan, told Anadolu Agency a recent spate of deadly attacks in the city had seemed to dampen the spirit of celebrations.

"Last week, during Eid and before that people were buying flags very generously. Usually, on Independence eve we have very good sales, but the suicide attack has made everyone sad," he said, referring to a Daesh-claimed terror bombing on Saturday targeting a wedding in Kabul.

In its recent past, the landlocked country linking South and Central Asia has gone through unmatched upheavals. After relinquishing monarchy in the 20th century, Afghanistan transformed into a republic and later experimented with communism and hardline Islamism, before adopting the western-backed capitalist democracy with the U.S. invasion in 2001.

On the government level, an array of festivities was organized to mark the day in style in spite of the otherwise bitter realities of ongoing armed insurgency, crippling poverty and political divisions in the country.

All key roads, squares and public offices are decorated with the portraits of King Amanullah Khan, leader of the independence movement, and the national flag.

Much of the centenary celebrations revolved around the iconic 19th Century Darul Aman palace in Kabul. This palace, designed by German architects in the 19th century, was devastated during the bloody civil war in the 1990s. President Ashraf Ghani has commissioned its reconstruction at a cost of $9 million.

Ghani, a former World Bank economist, has coined the slogan of "State Builder" for his re-election campaign, vowing to complete the legacy of reforms by King Amanullah Khan, whom he idealizes.

"Enemy of our freedom and independence, enemy of our people and country cannot see this celebration and happiness. This enemy can't face our powerful armed forces," said the Afghan president, who also blamed the Taliban for providing the terrorists with a platform for such barbaric attacks on mosques, schools and public spaces.

The Taliban insurgents -- who are engaged in crucial peace talks with the U.S. -- continue to propagate that the country remains under American occupation, hence there is no need to celebrate Independence Day.

In eastern Nangarhar province, a large number of devotees of the late king arrived from different parts of the country to pay their respect and offer prayers at his grave. The grave is placed inside a modest mausoleum in Jalalabad city.

Members of Sikh and Hindu minorities joined their Muslim countrymates in Jalalabad for the traditional "attan" and "dandya" dances throughout the night.

As a grim reminder of the stark realities of life in Afghanistan, a string of at least seven back-to-back blasts rocked Jalalabad on Independence Day, injuring at least 30 people, mostly civilians.