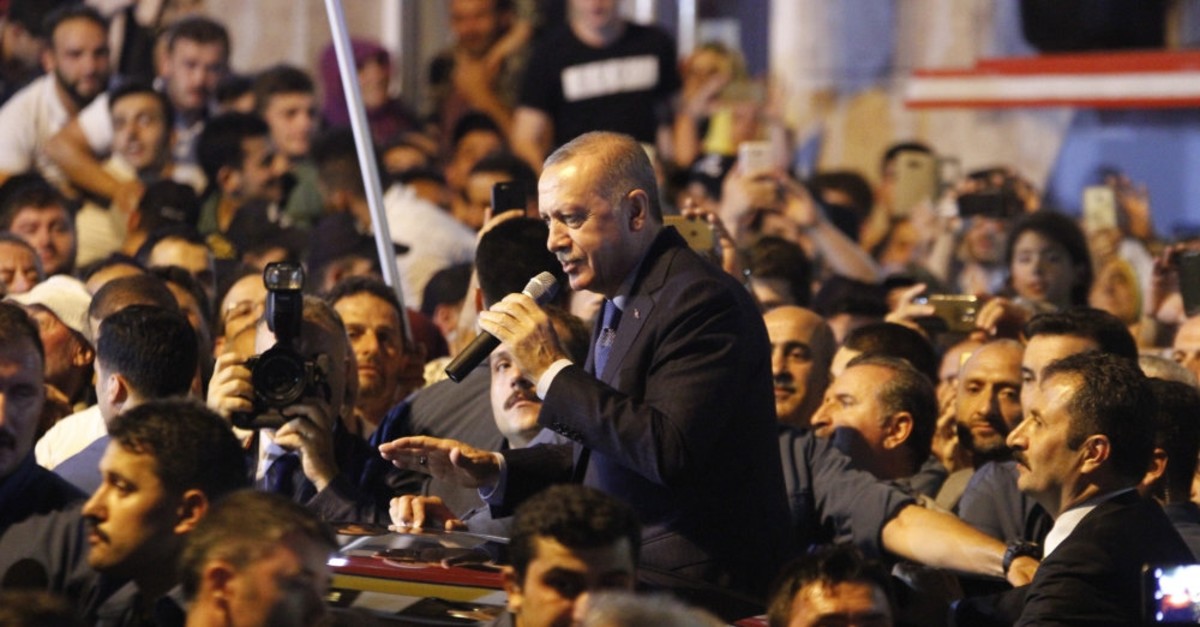 Starting the visits from his hometown Rize, President Recep Tayyip Erdoğan is expected to express his gratitude to the party's organizations for their efforts and continued support in the upcoming days

President Recep Tayyip Erdoğan starts his nationwide tour tomorrow to express his gratitude to the constituencies for their efforts in the elections that enabled the Justice and Development Party (AK Party) to come out as the leading party once again.

Erdoğan is expected to start the tour from the northeastern Rize province which is also his hometown.

After the March local elections and the redo election in Istanbul, the visits to thank the voters will initially take place in the constituencies where the voting rate was above 50% for the AK Party, including Malatya, Trabzon, Sakarya, Kahramanmaraş, Kayseri, Konya, Erzurum and Şanlıurfa provinces. During these visits, President Erdoğan will draw attention to important topics from the party's agenda and talk about the processes that were realized throughout the 17 years of the AK Party's rule since 2002.

During the weekend, the president is also expected to pay a visit to Artvin province's Yusufeşi district, where the party won the elections, after a repeat election following objections.

The president is also expected to state his warnings to the party's organizations in the district under the scope of rejuvenating the party. "A new AK Party is coming," Erdoğan said last month, indicating the process of renewal and preparation for the upcoming general elections in 2023. "I hope that we will face our voters in four years, with the same excitement as in the first year of our establishment and as a rejuvenated party with 22 years of experience," he continued. Stating that the staff in the party organizations will be broadened and strengthened, he also said that new policies will be adopted.

He also stressed that the AK Party will go through major changes after the completion of his Anatolian visits and announced that he will launch the 7th Extraordinary Congress in the fall.

Meanwhile, the AK Party is expected to celebrate its 18th foundation anniversary today. Erdoğan is expected to first head to his party's central executive committee and then attend the celebrations at ATO Congresium in Ankara. The event was initially planned to take place on Aug. 14 but was postponed due to the Qurban Bayram (Eid al-Adha). AK Party spokesman Mahir Ünal said on Wednesday that an exclusive "Time tunnel" for the anniversary is being prepared where all prominent actors of the party as of 2001 appear and the party's history is explained year by year. Approximately 1,000 people are expected to attend the meeting, from the founders of the party to local organizations. Besides, 18 young people, who were born on Aug.14, 2001, the day the AK Party was born, have also been invited to the event. The youth are expected to come together with the president under the scope of the event as well. Furthermore, a special anthem for the 18th year and a movie depicting these years was put together. "Everyone who sees themselves as a member of the AK Party family is welcomed," said Ünal.

Founded on Aug. 14, 2001 under the leadership of President Recep Tayyip Erdoğan, the AK Party has become the most successful political party in modern Turkey's democratic history with its successive election victories and has led reforms that upgraded the country's democracy and economy standards.

Transforming Turkish politics for the last 18 years, the AK Party has been preparing lead new reforms that will enable Turkey to reach its 2023 targets. Only one year after its foundation, the AK Party saw enormous achievements in the first general elections, garnering 34.3% of the vote in the Nov. 3, 2002 elections and earning 363 seats in Parliament. Since then, the AK Party has never lost an election. In the last 17 years under the AK Party administration, Turkey has witnessed rapid development in many areas including economy, democracy, individual liberties and rights, health and educational services in a stable political environment.