Turkey to carry out own plan if US delays Syria safe zone deal, Erdoğan says 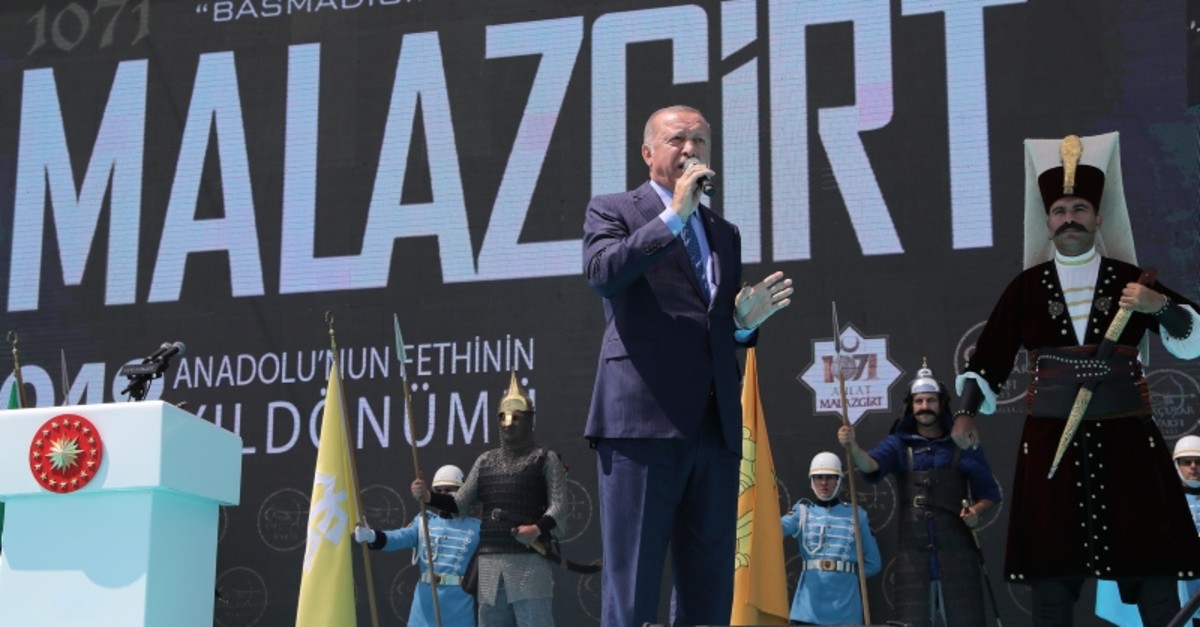 Turkey will have to carry out its own plan if the U.S. starts delaying the safe zone agreement related to northern Syria, President Recep Tayyip Erdoğan said Monday, as he noted that Ankara's plans are all ready.

Speaking at the 948th-anniversary ceremony of Battle of Malazgirt (Manzikert) in the eastern province of Muş, Erdoğan expressed Turkey's determination regarding Syria.

"We are slowly covering ground regarding the efforts for the establishment of a safe zone," the president said, adding that Turkey prioritizes dialogue and cooperation to resolve problems regarding northern Syria.

"If we are forced into an undesired plan or delay, we have all preparations ready and will proceed with them," he added.

The president said they expect Turkish troops to enter the region soon.

"I hope nobody tests our patience regarding our determination to clear terrorists from our border with Syria," Erdoğan said.

The U.S., which has designated the PKK a terrorist organization, still allies itself with the Syrian Democratic Forces (SDF) in Syria, which mainly consist of PKK offshoot People's Protection Forces (YPG) militants. Turkey wants YPG commanders removed from the SDF's top ranks and Sunni Arabs, together with non-YPG Kurds, included in the lower ranks.

Turkish drones carried out surveillance work in the safe zone area last week in preparation for the helicopter flight.

Turkey previously conducted two offensives into Syria, against Daesh and the YPG, in 2016 and 2018. Operations Euphrates Shield and Olive Branch liberated the region from YPG, PKK and Daesh terrorists, allowing hundreds of thousands of displaced civilians to return to their homes. The YPG is the Syrian offshoot of the PKK terror group, which has been responsible for the deaths of nearly 40,000 people in Turkey, including many children, women and infants, for more than 30 years.

"Our works are ongoing to initiate joint patrols with the American military elements soon," Akar said during inspections of troops in the eastern Erzincan province, along with the chiefs of general staff, land, air and naval forces.

Akar said the first joint reconnaissance flight was carried out with a U.S. helicopter on Saturday.

"Efforts are ongoing to carry out a similar flight with a Turkish helicopter in the coming days," he said, adding that joint patrols would start in the aftermath.

Akar also stated that Turkey does not have tolerance for delays here.

"The topics that we have planned and agreed on should be maintained and realized in a certain pace," he added.

In a phone call Wednesday, Akar and U.S. Defense Secretary Mark Esper agreed to launch the first phase of the Syria safe zone plan as of Aug. 21.

Akar said a safe zone east of the Euphrates River in Syria should be established within the framework of the principles set out without delay, according to the Turkish Defense Ministry.