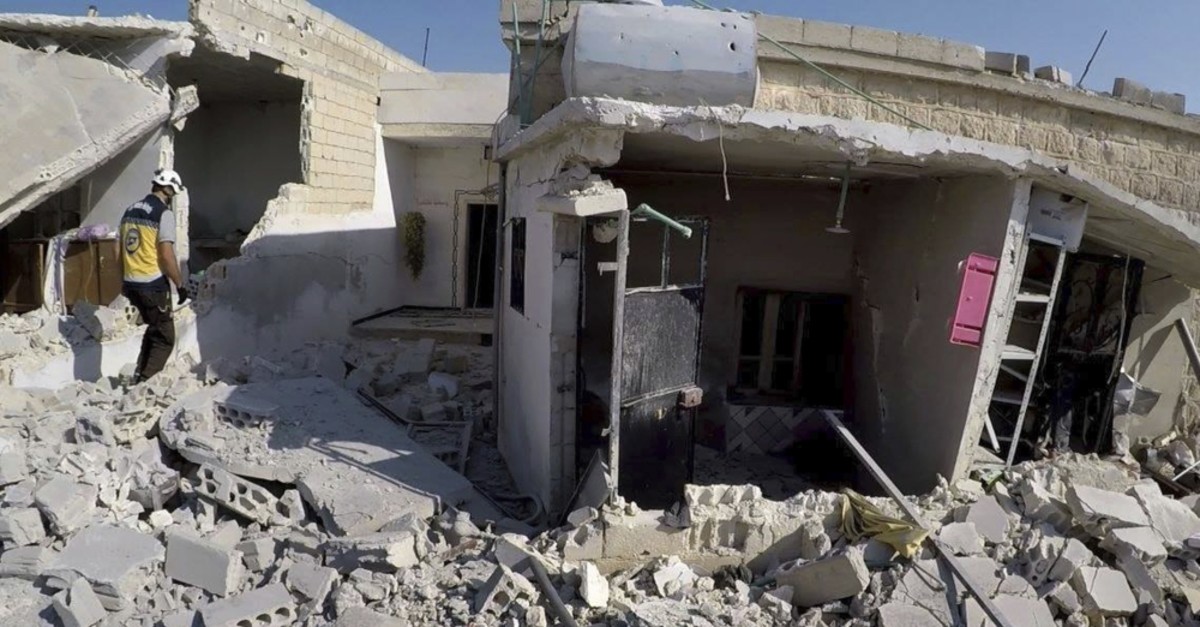 On Tuesday, Turkish and Russian leaders met in Moscow to deal with developments in northwestern Syria's Idlib province where the Bashar Assad regime has been targeting civilians in heavy attacks since April. While both countries reiterated their concerns and will to establish peace in the region, the waters in Idlib seem to be unsettled, as six more civilians were killed yesterday. According to information from the aircraft observatory of the Syrian opposition, Assad regime warplanes hit the Kafranbil district, Jarjanaz town and Tal Mannis village.

The regime also attacked the village of Sarakib yesterday, injuring eight civilians and causing heavy damaged on buildings in the region.

President Recep Tayyip Erdoğan and Russian President Vladimir Putin talked in Moscow on Tuesday as they seek common ground on the deadly fighting in northwestern Syria.

"Last year, at a very critical time, we had a deal with Russia and prevented the humanitarian crisis in Idlib. However, regime attacks have been threatening peace in the region since May," Erdoğan said during the joint press conference with Putin.

"Since May, more than 500 civilians have lost their lives in Idlib during regime attacks while more than 1,200 civilians have been injured," Erdoğan said, adding that Turkey's right to self-defense leads the country to defend itself throughout its border. "We have to take steps when it is mandatory to take them. We have a threat of migration flow towards our borders," the president noted.

The leaders' meeting in Moscow took place a day after Erdoğan said Turkey was ready to send ground troops into northern Syria "very soon" to keep its borders safe. The escalating violence in Idlib has shattered a deal reached in September between Russia and Turkey to establish a buffer zone.

Despite eight months of calm provided by the Sochi deal between Turkey and Russia in September, the regime, backed by Moscow, intensified its attacks starting April 26 under the pretext of fighting al-Qaida-linked Hayat Tahrir al-Sham (HTS) terrorists holed up in Idlib. Since then, the situation has gotten even worse, taking more civilian lives. Residential areas have been destroyed by indiscriminate attacks, while numerous educational facilities, health facilities and residential areas have collapsed or have become unusable after being targeted by bombs. While clashes are ongoing in southern towns, it is expected that people will flock to the Turkish border in case attacks move toward northern parts of Idlib.

It is also claimed that yesterday regime air raids hit near a Turkish military post in the region yesterday.

However, later in the day, security sources refuted allegations about the attack on the post. Yet, it would not be the first time that Turkish forces has been under the threat of regime attacks as last week a regime air strike cut off a Turkish military convoy shortly after it crossed into Idlib en route to the town of Khan Sheikhun.

Still, despite the ongoing attacks, the Russian defense minister said on Tuesday, following the meeting of Erdoğan and Putin that the agreements between Ankara and Moscow on the Idlib de-escalation zone were being implemented despite difficulties in Syria's northwest, and expressed hope for stability and normalization in the region.

"Idlib agreements are being implemented; however, there are some difficulties," Russian Defense Minister Sergey Shoigu told reporters.

He said that Russian and Turkish armies carry out joint patrols in Idlib, and added: "I hope the situation in Idlib will stabilize and completely return to normal."

Meanwhile, the Syrian opposition launched a wide-ranging attack to prevent Syrian regime forces from moving towards the inner parts of Idlib. "We have launched operations that target the regions where Syrian forces operate and killed some of them," said Naji Mustafa, the spokesperson of National Liberation Front (NLF).

While regime forces remain silent on the issue, Reuters reported that according to Western intelligence services, Russian forces in the region made military reinforcements to the fronts where the opposition aims to stop the regime.

Last week, regime forces recaptured Khan Sheikhoun, located on the Damascus-Aleppo highway. Regime and Russian aircraft have since been pounding the area around Maarat al-Numan, the next stop north along the same road, in apparent preparation for a further ground push, the Syrian Observatory for Human Rights monitoring group says.