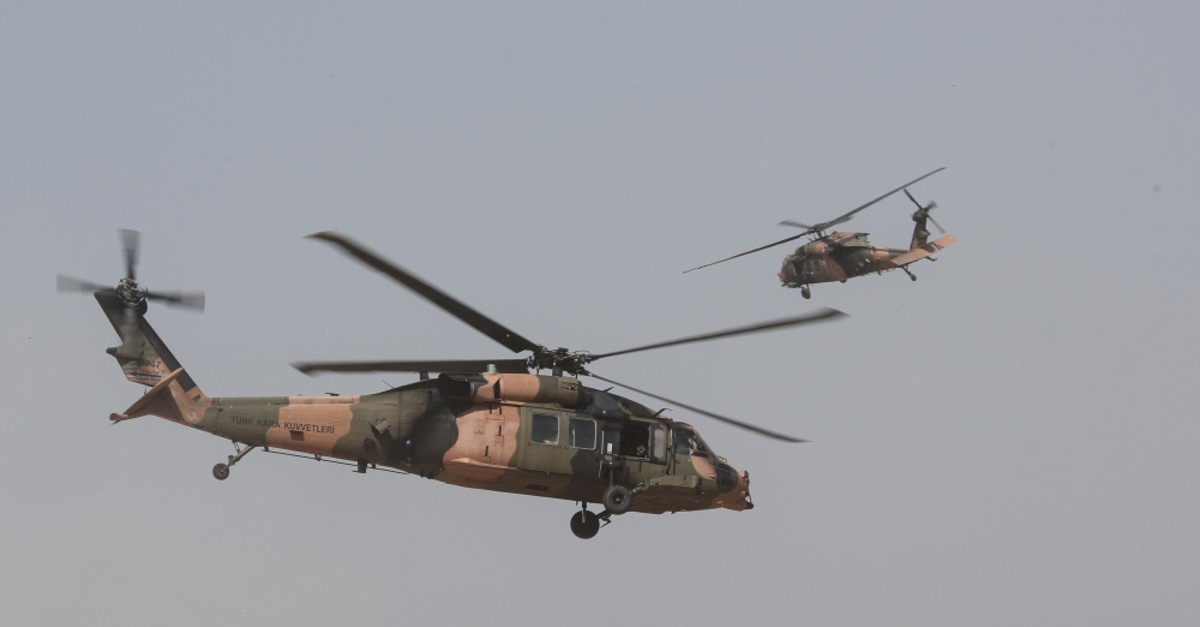 Preparations for a safe zone in northern Syria have gained momentum recently with joint Turkey-U.S. actions. However, Turkey remains concerned as the U.S. continues to support the YPG in Syria

As the first steps to form a safe zone in northern Syria have been taken by the two NATO allies, the U.S. still aims to assure Turkey that it will act on the country's security concerns while establishing the safe zone. However, subsequent developments in the region, particularly the ongoing presence of the PKK's Syrian affiliate, the People's Protection Units (YPG), continues to create concerns on Turkey's part.

U.S. Chairman of the Joint Chiefs of Staff General Joseph F. Dunford indicated in a press conference at the U.S. Department of Defense on Wednesday that Turkey is an indispensable ally and that its concerns regarding the safe zone are accordingly being addressed.

Dunford said: "We recently agreed on some of the specifics, we recently agreed to set up a coordination center. So in recent days, the United States European Command, the Central Command and the Turkish General Staff are now in a coordination center in Ankara. We've also made agreements to immediately address some of the threats along the border between Turkey and Syria, the removal of heavy weapons and those kind of things."

However, although Dunford's statements on the safe zone were positive in terms of Turkey's stance on the issue, when it comes to the presence of the YPG, the U.S. seems to be insisting on its hypocritical approach.

Pointing out that "Turkey and the U.S. have many more areas of convergence than divergence," Dunford said their main objectives were to maintain the continuity in their campaign against Daesh in Syria and to address the legitimate concerns of the Turkish government for the border. Adding that the U.S. is trying to maintain a balance between these two targets, he said the U.S. has been negotiating for nearly two-and-a-half years with all concerned parties and threats along the Turkey-Syria border were addressed, and all heavy weapons removed.

Dunford's statements came following reports claiming that the terrorist organization has been leaving the region. However, according to President Recep Tayyip Erdoğan, these reports do not bear any reality. Erdoğan said on Wednesday that only few of them had done so, raising questions if the U.S. again is trying to gain time or change strategies, not fulfilling its promises.

"The PKK's Syrian affiliate, the YPG terrorists, are just pretending to withdraw from areas near the Turkish border, and only a small portion of them have actually retreated," Erdoğan told journalists on his way back to Turkey after a visit to Russia where he discussed the security problems in Idlib. According to the safe zone agreement reached between the U.S. and Turkey, it was determined that the YPG had to withdraw from the zone, removing them from the area east of the Euphrates, and heavy weapons had to be abandoned.

Erdoğan said: "I told [Defense Minister] Hulusi Akar, a narro​wer depth is possible. Let us start like this and pursue this process. Later, we will do what is necessary."

On Aug. 7, Turkish and U.S. military officials agreed to set up a safe zone and develop a peace corridor running from the Euphrates river to the Iraqi border to facilitate the return of displaced Syrians currently living in

Turkey to their home country and provide security for Turkish border settlements and military outposts. They also agreed to establish a joint operations center. The agreement envisages the setting up of measures necessary to address Turkey's security concerns.

Although the first phase to establish a safe zone in northern Syria was launched together with the U.S. after a long period of discussions, Turkey is still approaching the issue cautiously due to the previous failed negotiations with its NATO ally.

Accordingly, Erdoğan reiterated that Turkey would not accept delays in the plan, comparing it to an earlier deal with Washington to remove YPG fighters from the northern Syrian city of Manbij, which Ankara accused Washington of delaying. "We will never tolerate a delay like we saw in Manbij. The process must advance rapidly," he said.

The U.S., which has designated the PKK as a terrorist organization, still allies itself with the PKK offshoot YPG terrorists. The U.S. has primarily partnered with the YPG in northeastern Syria in the fight against Daesh. Turkey strongly opposes the YPG's presence in northern Syria, which has been a major sticking point in strained Turkey-U.S. relations due to the latter's support for the YPG under the pretext of fighting Daesh. The U.S. has provided military training and given truckloads of military support to the YPG, despite its NATO ally's security concerns. To reduce tensions, Turkey and the U.S. agreed on a road map in June 2018, foreseeing the withdrawal of the YPG from Manbij and installing joint Turkish-American patrols, which began last November. However, the process has been sluggish as the terrorist group was still present in the city despite the three-month timetable set for implementing the deal.

Turkey expects the creation of a 32-kilometer safe zone in northern Syria, which must be cleared of YPG terrorists. Ankara has warned that if the establishment of such a zone is delayed, it will take cross-border military action to remove the terrorist threat on its southern border. Erdoğan, who underlined significant steps taken to clear the area east of the Euphrates of the YPG, said joint patrols with the U.S. would start soon. "We will never allow the east bank of the Euphrates to become a safe haven for YPG terrorists," he said. It was also announced that this week Turkish ground troops would enter the planned safe zone "very soon," having warned previously that Turkey would mount a cross-border offensive on its own to clear the YPG from its border if necessary. "All the personnel, the armored carriers, all are on the border. That is, we are in a position to do everything at any moment," he said. Conflict between Turkey-backed FSA and the YPG, attacking opposition-controlled al-Bab

Meanwhile, it was reported yesterday that the YPG clashed with the Free Syrian Army (FSA) on Wednesday evening when the terrorists tried to infiltrate Syria's northern al-Bab province. The conflict sparked when the terrorists launched attacks on western al-Bab's Diklabas village with heavy weapons, upon which the FSA units controlling the region responded by pushing back.

Simultaneously, the YPG attacked the FSA from Kafer Karshin, an area south of the northwestern city of Azaz and in the village of Qimar south of Afrin, but its attacks were similarly warded off. Al-Bab, an important crossroads and settlement in northeastern Aleppo province, was liberated from four years of cruel Daesh rule on Feb. 22, 2017 by the Turkish Armed Forces (TSK) and FSA fighters as part of Operation Euphrates Shield, launched on Aug. 24, 2016, to clear the terrorist group from Turkey's border regions. Due to its strategic importance, al-Bab witnessed the fiercest clashes between the Daesh terrorists and Turkish forces, especially in the Sheikh Aqeel district overlooking the town. Over three decades, the PKK, recognized as a terrorist group by the U.S., the EU and Turkey, has taken some 40,000 lives, including women, children and infants.

Regarding the issue of the safe zone, Eray Güçlüer, a security expert, said that the U.S. does not want a safe zone. "There is no change in the intention of the U.S.; however, there is a change in its stance in the region. Turkey wants to establish a safe zone, the U.S. actually does not want this," he said adding that Turkey is an irreplaceable actor for the U.S. in the region. Meanwhile, yesterday, there was helicopter movement in the southern Şanlıurfa province of Turkey, where there is a joint operation center for the formation of the safe zone. Two helicopters belonging to Turkish military forces have been patrolling along the Syrian border with the participation of U.S. soldiers. While military reinforcements in the region have also been ongoing, it is also reported that preparations for ground patrols have also been completed and are expected to take place in upcoming days.

While Turkey was conducting its patrolling activities, the U.S. was also simultaneously patrolling across the border with its own helicopters.