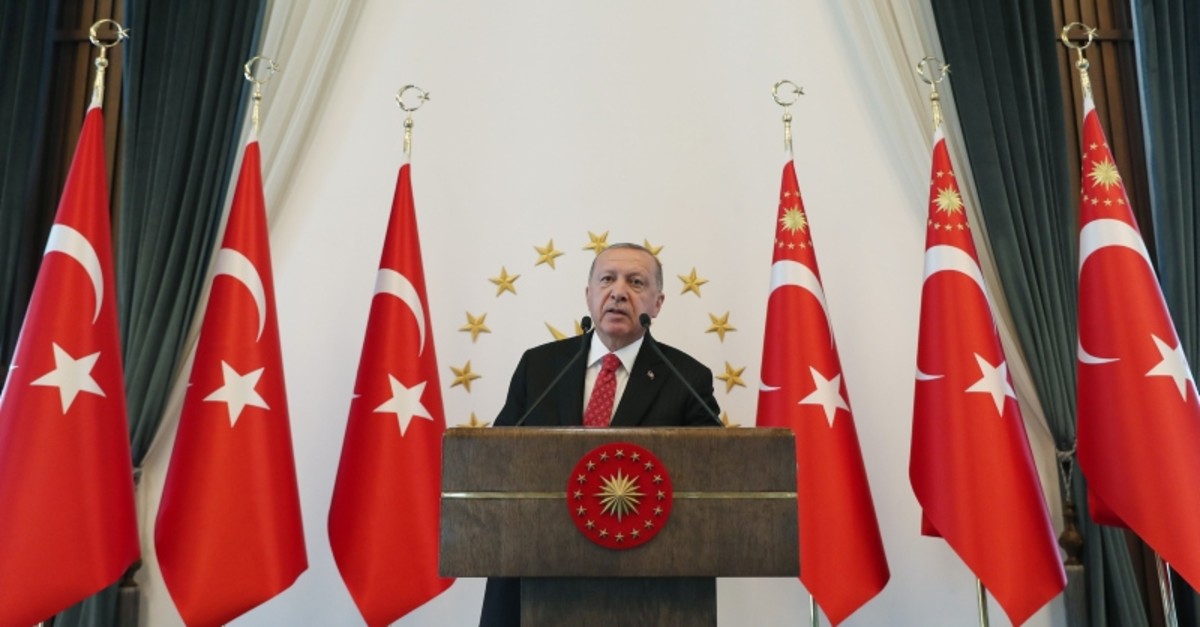 President Recep Tayyip Erdoğan reiterated Tuesday that Ankara's safe zone plan is crucial for Turkey both due to security concerns and to protect its welfare, urging Washington to stand with its NATO ally in its efforts.

"It's not possible for Turkey to handle a new wave of migration from Syria," Erdoğan said in his televised address at the Beştepe Presidential Palace Complex in Ankara after a meeting with U.S. Secretary of Commerce Wilbur Ross and the accompanying delegation, who are in Turkey for a five-day working visit.

"Currently, the biggest obstacles before the return of migrants are terrorist groups such as the PKK and its affiliate the [People's Protection Forces] YPG," the president said, referring to the biggest group inside the U.S.-backed Syrian Democratic Forces (SDF), currently occupying one-third of Syrian territory in the north and northeast.

"This structure, which is carrying out ethnic cleansing, forcing the peoples of the region to migrate and threatening Turkish citizens' safety of life and property, must absolutely be removed from being an element of threat," Erdoğan said.

"Sending up to 50,000 truckloads of equipment and ammunition to terrorist groups is seriously bothering us," he added.

Erdoğan previously criticized the U.S. for trying to straddle both Turkey and the PKK, accusing Washington of "willing to establish a safe zone for the terrorist group."

"If the safe zone in the east of Euphrates with our own soldiers will not be established by the end of September, we will have no choice but to go about it our own way," the president warned in Saturday's address in the eastern province of Malatya.

"This is not something to be completed in three or five helicopter flights, five or ten vehicle patrols; the presence of a couple of soldiers in the region are only for show. We must bring the whole region with its cities and rural areas to a safe status to settle one million people there," Erdoğan said.

Earlier on Tuesday, Foreign Minister Mevlüt Çavuşoğlu also accused the U.S. of not keeping its promises in northern Syria due to its engagement with the PKK/YPG terror group.

The first steps taken for a safe zone in northern Syria with the U.S., including the establishment of a joint operations center was "a good start," Çavuşoğlu said at a joint press conference with his visiting Montenegrin counterpart Srdjan Darmanovic.

Çavuşoğlu stressed that Turkey was clear about its warnings.

"Why did we need these warnings? Because, unfortunately, the U.S. has failed to keep its promise, including the Manbij roadmap, due to its engagement with this [PKK/YPG] terrorist organization, and has neglected this roadmap," referring to a 2016 deal for the PKK/YPG's withdrawal from the northern Syrian town.

Çavuşoğlu described the U.S.' position in the east of Euphrates River as "purely cosmetic."

"The steps taken or those said to have been taken are cosmetic steps," he said.

"We see that the U.S. is trying to stall the whole process and make us go along with it; however, our position on this issue is very clear," said Çavuşoğlu.

The foreign minister said clearing northern Syria of these terror groups was "a security concern for Turkey" and pointed out that the U.S. was sustaining this stalling process via these "cosmetic steps" for show and also continuing to cement its engagement by supporting terror groups.

On Sept. 8, Turkey and the U.S. military personnel completed their first joint ground patrol for the establishment of a safe zone east of the Euphrates in Syria. The patrol was backed by unmanned aerial vehicles and helicopters.

The idea to set up a safe zone in northern Syria and develop a peace corridor to facilitate the movement of displaced Syrians who want to return home was agreed upon by both sides on August 7. Turkey and the U.S. also agreed to establish a joint operations center. The agreement also envisaged setting up necessary security measures to address Turkey's security concerns, including clearing the zone of the terrorist YPG/PKK, a group the U.S. has sometimes been allied with, over Turkey's objections.

The YPG is the Syrian offshoot of terror group PKK, which has been responsible for the deaths of nearly 40,000 people in Turkey, including many children, women and infants, for more than 30 years.

Syria has just emerged from a devastating civil war that began in 2011, when the Assad regime cracked down on pro-democracy protests with unexpected ferocity.

Since then, hundreds of thousands of people have been killed in the conflict, according to U.N. figures.