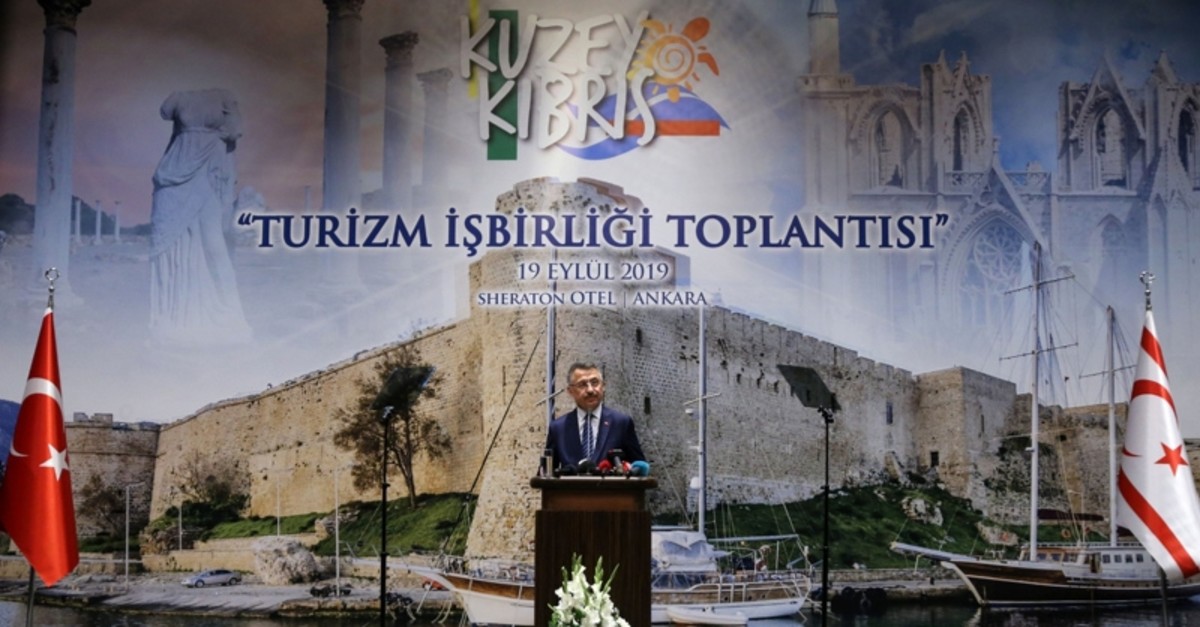 Turkey will not allow Greek Cypriots to violate the rights of Turkish Cypriots with regards to their official status and the exploitation of natural resources, Vice President Fuat Oktay said Friday.

"Nobody can consider giving minority status to Turkish Cypriots, who are common owners of the island," Oktay said, adding that the Turkish Cypriots will not accept such status.

Oktay reiterated Ankara's determination to protect the rights of Turkish Cypriots in the Eastern Mediterranean.

The vice president also noted that the closed "ghost" city of Varosha (Maraş) will be opened after the properties are returned to their rightful owners based on historical documents.

Located south of the eastern port city of Famagusta (Mağusa), Varosha was a famous resort region in Cyprus known for for pristine beaches, but has been closed since 1974. That same year, Turkey used its guarantor rights and intervened in the island following a Greek-inspired coup backed by the junta then in power in Athens. The coup followed decadelong inter-ethnic violence and terrorism targeting Turkish Cypriots, who were forced to live in enclaves when Greek Cypriots unilaterally changed the constitution in 1963 and stripped the island's Turks of their political rights.

Following the operation, Turkish military closed Varosha, which included more than 100 hotels with significant foreign investment, until a permanent solution could be reached on the island. The city is protected by a 1984 U.N. Security Council resolution, stating that the empty town can only be resettled by its original inhabitants. However, 45 years of negotiations proved futile and the town, legally a military zone, is commonly referred to as the "ghost town" due to abandoned and untended buildings.

If the Greek Cypriots had accepted the 2004 United Nations Annan plan for the reunification of the island, Varosha would now be back under Greek Cypriot control and the residents would have their homes back. Despite this, along with significant concessions in the Karpas Peninsula and Morphou (Güzelyurt) area, the majority of Greek Cypriots voted against the plan, whereas Turkish Cypriots supported the plan.

Various other proposals also foresaw allowing unrestricted use for Turkish Cypriots in Ercan Airport and Famagusta Port in exchange for the transfer of Varosha to Greek Cypriots.