US actions in northern Syria far from reassuring Turkey's concerns 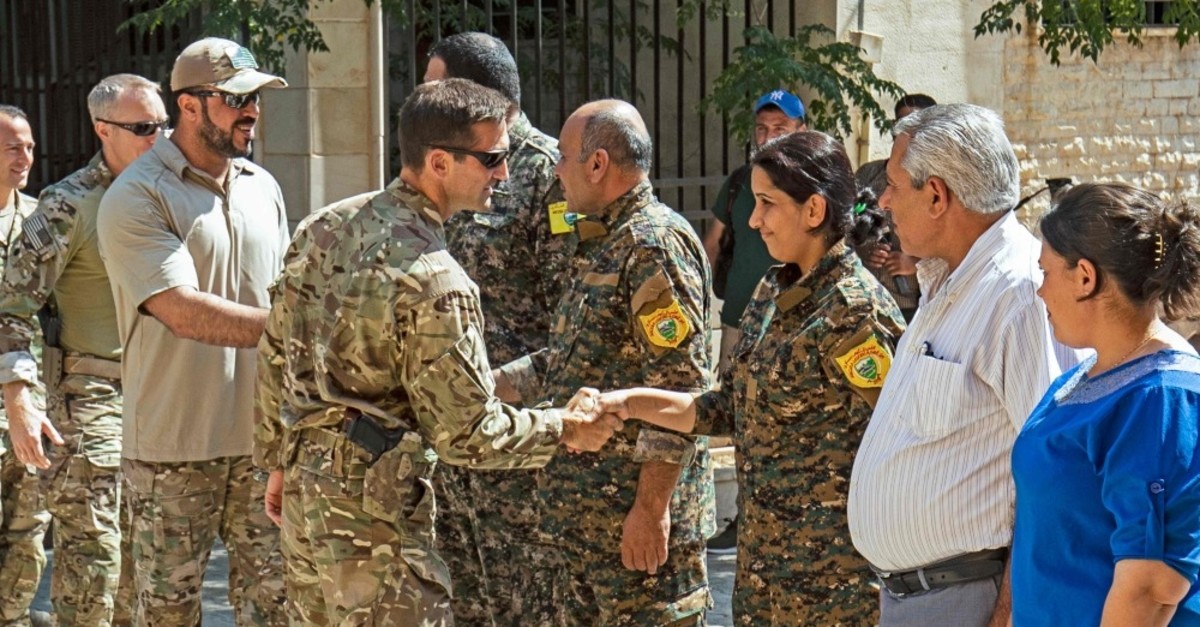 Despite an ongoing joint effort for a safe zone, the U.S.' continued affiliation with the PKK-linked YPG may push Turkey to follow its own plan

The joint activities of the Turkish and U.S. militaries in northern Syria to establish a safe zone continue gradually to bring security back to the region, a long-awaited plan that is expected to benefit Syrian refugees as they'll be able to return home. However, despite this process, Turkey's concerns toward the U.S. remain, as the U.S. has not assured Turkey of the alliance by continuing to support a terrorist group that poses a national security threat to Turkey. "We have been working together with the U.S. for some time.

The U.S. is our strategic partner and ally; however, we have not forgotten both Manbij and Raqqa. We have experienced this [stalling] three or four times with the U.S. We said that we could fight together against all kinds of terrorist elements including Daesh, the PKK and its affiliate, the People's Protection Units [YPG], yet they did not keep their promises," Defense Minister Hulusi Akar said Thursday, referring to the country's history with the U.S. Reiterating that Turkey will not tolerate a stalling process any longer, Akar said that Turkey wants the U.S. to take matters agreed upon to the field.

Criticizing the U.S., Akar said: "They are unwilling; thus, the process advances sluggishly. We have seen that some places they claimed to have destroyed were not destroyed." Yet, even though slowdowns are seen, meetings are ongoing and there is progress, Akar explained. The U.S. has primarily partnered with the YPG in northeastern Syria in the anti-Daesh fight. Turkey strongly opposes the YPG's presence in northern Syria, which has been a major sticking point in strained Turkey-U.S. relations, due to the latter's support for the YPG under the pretext of fighting Daesh.

The U.S. has provided military training and given truckloads of military support to the YPG, despite its NATO ally's security concerns. The surprising thing, however, despite claiming numerous times that Daesh has been defeated, the support of the U.S. to the YPG still continues.

To reduce tensions, Turkey and the U.S. agreed on a road map in June 2018 foreseeing the withdrawal of the YPG from Manbij and installing joint Turkish-American patrols, which began in November. However, the process has been sluggish as the terrorist group was still present in the city despite the three-month timetable set for implementing the deal. Ankara has pointed out that it will not allow the YPG to strengthen its grip in Syria. Turkey is also prepared to launch an operation east of the Euphrates to eliminate the YPG.

He added that long negotiations have taken place. "Senators, military representatives have come and gone. They said that not even one Turkish soldier could enter east of the Euphrates," Akar said. A certain point has been reached following these negotiations and the U.S. has agreed on the ground patrols, the operation center, drones and helicopters.

"We will set up patrol bases in east of the Euphrates and the subsequent retreat of terrorists will be a huge gain. Our aim is to form a safe zone of 30-40 kilometers along the border. These will be joint bases of both Turkey and the U.S. Their numbers will be determined according to field conditions, and we want them to be permanent", Akar said. Thus, the safety and stability of the area to ensure the return of Syrians living apart from their country since the civil war broke out in 2011 will be guaranteed.

"We want to solve the terrorist issue together with our American allies. They talk about Daesh, yet what have they done against it? It is our army that has eliminated about 3,000 Daesh terrorists fighting hand to hand," the defense minister said referring to successful operations Turkey has previously conducted.

In the last two years, Turkey's Euphrates Shield and Olive Branch operations liberated the region from YPG, PKK and Daesh terrorists, allowing hundreds of thousands of displaced civilians to return to their homes.

A few days ago, President Recep Tayyip Erdoğan said the upcoming months would be indicative of whether the Syrian crisis will be resolved in peace or whether it will deepen. The president reiterated once again that Ankara will deploy its own plans within two weeks if the ongoing safe zone plans and implementation with the U.S. in northern Syria prove unfruitful.

The recent statements of U.S. commanders have done nothing but prove Turkey's concerns about its NATO ally.

"We continue to provide much-tailored arms and vehicles to the SDF [Syrian Democratic Forces]" for use against Daesh, said Chris Maier, the director of the Defeat-Daesh Task Force at the Department of Defense. "We're very transparent about what those supplies are, we provide monthly to Turkey a report of what those arms and vehicles are," he continued.

Speaking on the safe zone plan, it was highlighted that the U.S.' main objectives was to address Turkey's security concerns, prevent a Daesh resurgence and maintain a continued fight against Daesh. On Aug. 7, Turkish and U.S. military officials agreed on the establishment of a safe zone in northern Syria and develop a peace corridor running from the Euphrates River to the Iraqi border to facilitate the return of displaced Syrians currently living in Turkey to their home country and provide security for Turkish border settlements and military outposts. They also agreed to establish a joint operations center. First, the fully operational combined joint operations center in southern Turkey was established, the CJOC as the U.S. calls it; this center includes representatives from both Turkish and U.S. militaries at the one-star level. The center is responsible for the daily planning and coordination for implementing the security mechanism. Second, the removal of fortifications is ongoing to address Turkey's security concerns. Referring to the removal, Maier said, "We're doing this in conjunction with the Syrian Democratic Forces on the Syrian side of the border." Last, real operations are conducted in the form of aerial flights and ground patrols.

"What we've committed to do is help to ensure the removal of YPG elements and, as much as possible, ensure that that doesn't result in a security vacuum. I think our overwhelming focus remains the defeat of ISIS, the enduring defeat of ISIS and working by, with and through the SDF to achieve that," said the Pentagon official, using another acronym for Daesh.

Upon questions concerning if there is a trust issue between the U.S. and Turkey, Maier said that the two countries have been allies for more than 70 years and that both are experienced in mutual trust.

Replying to Daily Sabah's question on whether there is any activity to retrieve weapons given to the YPG, Brig. Gen. Christian Wortman, deputy director of operations of U.S. European Command (EUCOM), said, "As part of a security mechanism, the U.S. is fully committed to the removal of heavy weapons from the area designated as the party of this [safe] zone or area."

On the same issue, Brig. Gen. Scott Naumann, director of operations of the Combined Joint Task Force-Operation Inherent Resolve (CJTF-OIR), said Washington's support for the SDF continues "despite [Daesh] not being able to hold any territory to govern."

Despite earlier U.S. promises oo retrieving weapons provided to the YPG, the White House's recent remarks suggested they cannot retrieve all of the weapons, which, according to Ankara, may eventually be transferred to the PKK to be used in its terror campaign against Turkey.