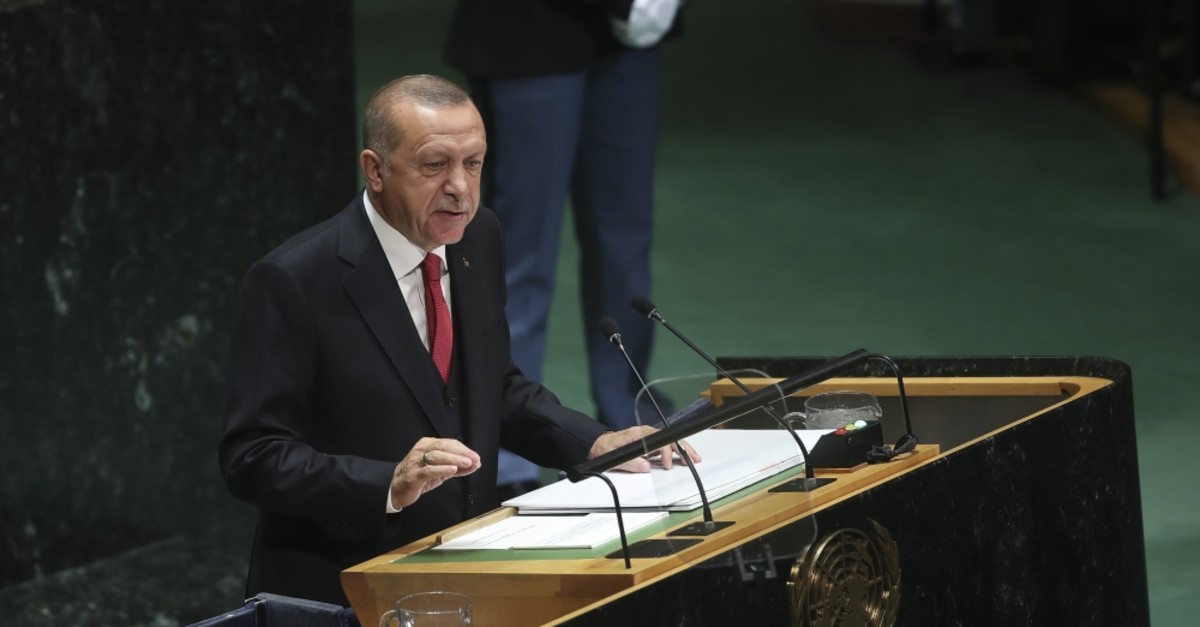 Structural reforms in global governance are needed for a fairer world that addresses inequalities and injustice, President Erdoğan said in his address at the U.N. General Assembly

The existing global governance system and institutions need to be radically reformed to address the current necessities of a world that is suffering from global injustice, President Recep Tayyip Erdoğan said yesterday in his speech at the 74th session of the U.N. General Assembly in New York. Erdoğan underlined that the world is struggling with global injustice and inequalities, referring to a quote from Rumi, who said that justice means the equal share of rights and responsibilities. "It is unacceptable that one part of the world lives in luxury and enjoys the benefits of prosperity while people in other parts suffer from poverty, misery and illiteracy," Erdoğan said, adding that it is obvious that responsibilities and rights are not shared equally in today's world.

Reminding the assembled leaders that the existing global order was built to implement justice in the world following the tragedies of World War II, the president said that the status quo has lost its capacity to solve global problems such as terrorism, hunger, misery and climate change. "We cannot turn our backs to the reality that if all of us are not safe, none of us will be safe. For many years, I have been saying from this rostrum that we cannot leave the fate of humanity to the discretion of a handful of countries," he added. Shortly thereafter, Erdoğan reiterated his famous phrase, "The world is bigger than five," which refers to the five permanent members of the U.N. Security Council, namely China, France, Russia, the U.K. and the U.S., who hold veto power within the body.

Erdoğan once again called on the U.N. to change the status quo for a just and fair global order.

"We cannot remain silent about these global problems," he said and added that radical reforms must immediately be made.

The current structure of the United Nations Security Council has long been criticized by some world leaders, stressing that the fate of the world cannot depend on just five states, referring to the veto power of the five permanent member states of the council.

Leaders at the summit have also urged that significant reforms must be made to make the international body more effective in resolving world crises.

President Erdoğan often criticizes the U.N., saying that the current structure of the organization is an obstacle to resolving ongoing problems around the world. The president critiqued the fact that these countries can block crucial international decisions regarding various delicate matters, calling for significant U.N. reform.

With the saying, "The world is bigger than five," Erdoğan has long chastised the U.N. structure that has continued since World War II. He has been consistently voicing this in his addresses to the U.N. General Assembly. This situation already reveals that the U.N. is a status quo institution and a structure that created institutions and mechanisms legitimizing the order established after World War II and maintained under U.S. hegemony.

Erdoğan has previously said that major decisions should not be left to the mercy of five members only, but rather, countries should alternate and the number of members sitting at the U.N. Security Council should be increased to around 20.

Speaking about the ongoing humanitarian crisis in Syria, Erdoğan said that Turkey has inflicted the first and heaviest blow to Daesh in the region.

"With Operation Euphrates Shield, we paved the way for Daesh's collapse in Syria by neutralizing approximately 3,500 terrorists," he said.

Calling the international community to help end the ongoing crisis in Syria, Erdoğan said that Turkey is the most generous country that hosts the largest community of Syrian refugees in the world.

Underling that the PKK terrorist organization's Syrian affiliate, the People's Protection Units (YPG), still operates under the guise of the Syrian Democratic Forces (SDF) in northern Syria, Erdoğan said that the group must be dealt with for the safety and security of the region. "A peace corridor on the Turkish-Syria border will enable the resettlement of 3 million Syrians from Turkey and Europe if it is extended to the Deir el-Zour, Raqqa line," Erdoğan added, referring to the planned safe zone in northern Syria.

Erdoğan also called on U.N. member countries to back Turkey's efforts to ensure security in Idlib, Syria to avoid another wave of mass migration and massacres, and added that the efficient functioning of the Syrian constitutional committee is critical for the political and territorial unity of Syria.

Turkey and Russia agreed last September to turn Idlib into a de-escalation zone, where acts of aggression are expressly prohibited. The Syrian regime and its allies, however, have consistently broken the terms of the cease-fire, launching frequent attacks inside the de-escalation zone. The zone is currently inhabited by about 4 million civilians, including hundreds of thousands of people displaced from cities and towns throughout the war-weary country.

Despite eight months of calm provided by the Sochi deal between Turkey and Russia in September, the regime, backed by Moscow, intensified its attacks starting on April 26 under the pretext of fighting Hayat Tahrir al-Sham (HTS) terrorists holed up in Idlib.

Since then, the situation has gotten even worse, taking the lives of innumerable civilians. Residential areas have been destroyed by indiscriminate attacks, while numerous educational facilities, health facilities and residential areas have collapsed or have become unusable after being targeted by bombs. While clashes are ongoing in southern towns, it is expected that people will flock to the Turkish border in case attacks move toward northern parts of Idlib.

According to Interior Ministry figures, the number of refugees was 4.2 million in 2017 and has now reached 4.9 million. While 3.6 million Syrians are living in Turkey, more than 415,000 Syrians have been born in Turkey since the start of the civil war in 2011. Ankara has spent nearly $40 billion so far, while it has only received about 6 billion euros ($6.6 billion) of support from the international community. Turkey has long criticized European countries and the international community for their lack of support on the issue of refugees.

Erdoğan calls for dialogue on solution over Kashmir

Regarding the conflict in Kashmir, Erdoğan called for dialogue for a solution of the dispute between Pakistan and India on Kashmir.

He criticized the international community for failing to pay attention to the Kashmir conflict, which has been unresolved for 72 years.

The president said the stability and prosperity of South Asia cannot be separated from the Kashmir issue. "In order for the Kashmiri people to look at a safe future together with their Pakistani and Indian neighbors, it is imperative to solve the problem through dialogue and on the basis of justice and equity, but not through collision," said Erdoğan. The India-administered region has been facing a clampdown since Aug. 5, when the Indian government revoked Article 370 of the Indian constitution, which conferred a special status on it.

Hundreds of people, mostly political leaders, have been detained or arrested by authorities since the Indian government made the move.

Ankara highlights unjust position of Greek side in Cyprus issue

Erdoğan also touched on the ongoing tensions in the Eastern Mediterranean.

"Despite long negotiations, the Cyprus issue has not been resolved due to the uncompromising, inequitable and unjust position of the Greek Cypriots," Erdoğan said, and reiterated that Turkey will continue to protect the legitimate rights and interests of Turks and Turkish Cypriots. Turkey has consistently contested the Greek Cypriot administration's unilateral drilling in the Eastern Mediterranean, asserting that the Turkish Republic of Northern Cyprus (TRNC) also has rights to the resources in the area.

The island of Cyprus has been divided since 1974 when a Greek Cypriot coup took place after decades of violence against the island's Turkish community and Ankara's intervention as a guarantor power. It has seen an on-and-off again peace process in recent years, including the latest initiative in Switzerland under the auspices of guarantor countries Turkey, Greece and the U.K. that collapsed in 2017.

Underlining the need for justice in the Middle East, Erdoğan said, "Today, the Palestinian territories under Israeli occupation have become one of the places on earth where injustice prevails the most."

He reminded the assembly of the images of an innocent woman murdered heinously by Israel on the streets and said that it must awake the conscience of all just people.

Erdoğan explained that the solution to the issue is the immediate establishment of an independent Palestine on the basis of the 1967 borders with east Jerusalem as its capital. He called on the international community and the U.N. to provide concrete support to the Palestinians beyond mere promises and questioned the role and point of the U.N. if it fails to implement its own resolutions against Israel.

"Compared to the 1967 plan, Palestine nearly ceased to exist as Israel just can't get enough of occupation. What is the U.N. good for if its resolutions against one of its member states, Israel, mean nothing?" Erdoğan asked.

Israel occupied the West Bank, including east Jerusalem, during the 1967 Arab-Israeli War. It annexed the entire city in 1980, claiming it as Israel's "eternal undivided capital," a move never recognized by the international community. International law views the entire West Bank as "occupied territory" and considers all Israeli settlements built there as illegal.

He concluded his address with the message of "freedom, peace, prosperity, justice and a peaceful and safe future for all."