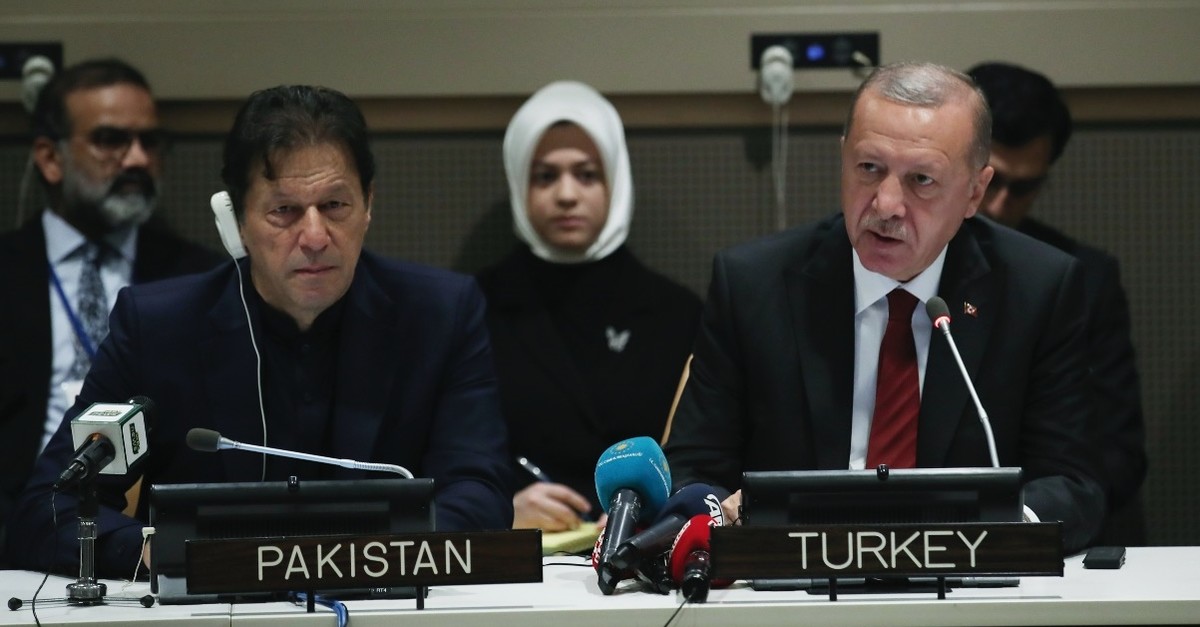 At a U.N. event in New York City Wednesday, President Recep Tayyip Erdoğan said that hate speech has become the most frequently used tool in the spread of anti-Muslim sentiment, racism and xenophobia, underlining that Turkey is determined to contribute to efforts to fight it

Turkey is determined to contribute to efforts to fight anti-Muslim sentiments, racism and hate speech, a crime that Muslims suffer the most, President Recep Tayyip Erdoğan said at a U.N. event on countering hate speech yesterday. Underlining that hate speech has become the most frequently used tool to spread anti-Muslim sentiment, racism and xenophobia, Erdoğan said that Muslims are more likely to experience attacks based on hate speech. "Muslim women are harassed on the streets, at the market or at the workplace just because they cover their heads," Erdoğan said, indicating that hate speech cannot be confused with freedom of thought.

He criticized politicians for "normalizing" hate speech through posts they share on social media. "It is a huge slander, immorality to bring Islam, a religion of peace, together with terrorism. Such a thing cannot be accepted," the president further said, criticizing the attempts to create a false image of Islam in the international community. In order to overcome all these problems, Erdoğan suggested a platform be established by the U.N. against hate speech. "Turkey supports the establishment of a database on hate speech at the U.N.," Erdoğan said. Regarding the issue of Kashmir, Erdoğan said it has turned into an open-air prison because of India's restrictions in the region. He urged countries and organizations to take action regarding the matter. The president pointed at the young Muslim people tortured in the region for eating meat, underlining the absurdity of the situation since "It cannot be expected that everyone become vegetarians." "This is not possible. If you say there is freedom of religion, my religion does not order me to [be vegetarian.] I respect your belief. Why don't you?" Erdoğan asked.

He added that despite the fact that eating pork is forbidden in Islam, no one intervenes against those who prefer to eat pork in Turkey since "it is not our business who eats what."

The India-administered region has been dealing with a clampdown since Aug. 5, when the Indian government nixed Article 370 of the Indian Constitution, which conferred it special status.

Hundreds of people, mostly political leaders, have been detained or arrested by authorities since the action.

The EU Commission coordinator on combating anti-Muslim hatred, Tomasso Chiamparino, said hatred and discrimination had become commonplace in the discourse of some politicians and that this could not be ignored.

Chiamparino said that despite discrimination against people with headscarves or beards, combating Islamophobia was not a priority in many countries.

Underlining that the voice of victims of Islamophobia was not being heard, he added that if countries failed on this issue, the EU project would be unsuccessful. EU Parliament lawmaker Magid Magid, said the far right had started to gather supporters across Europe, and that these people not only threatened human rights but also security. "Let's not give one more inch to Islamophobia. Let's push back against hijab bans and halal bans," Magid said.

Speaking to Anadolu Agency (AA) after the event, former lawmaker of the Brussels Capital Region Parliament Mahinur Özdemir said Islamophobia seriously affects Muslim women. Özdemir said women became subjects of Islamophobia at a rate of 76% in Belgium and 84% in France.

"Hate speech has started to turn into attacks," she stressed.

Anti-Muslim hatred has significantly risen in Europe in the recent years. Far-right extremism and xenophobia have fueled anti-Muslim hatred in Western countries, where terror attacks by Daesh and al-Qaida are used as an excuse to legitimize those views. Although enmity toward Muslims is not a new phenomenon, it intensified after 2001 when two airplanes crashed into the World Trade Center in New York City. Since then, for almost two decades, Islam has been unjustly tarnished with labels that have negative connotations and portrayed as a religion of hate and violence with anti-Western sentiment and women's oppression. This trend of intolerance has triggered deadly attacks against Muslims and immigrants since then.

With growing racism emerging as a serious problem in almost all EU states, citizens of foreign origin are more vulnerable in some countries. For example, in Germany, Muslims have become targets of countless attacks in recent years.

According to a report by the Leipzig-based Competence Center for Right-Wing Extremism and Democracy Research published last November, the country has been showing increasingly hostile attitudes toward immigrants, the Muslim community and other minorities such as the Roma, with one-in-three Germans thinking foreigners come only to exploit the welfare of the state.