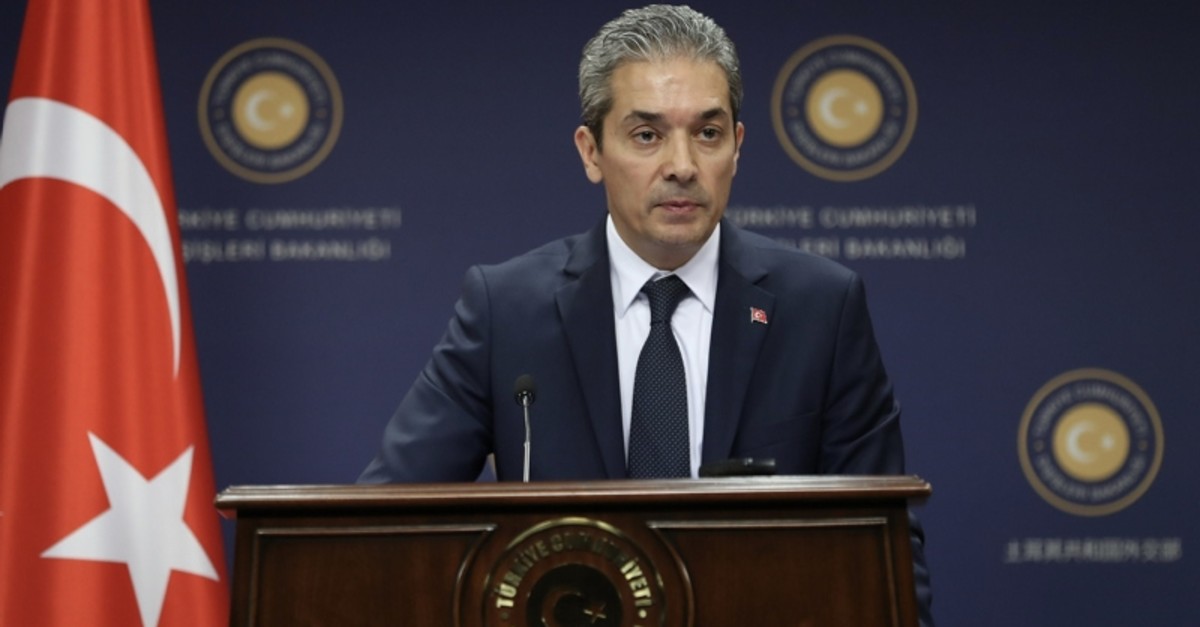 Ankara rejected the "baseless claims" about Turkey mentioned in a joint statement of a recent trilateral meeting of the foreign ministers of Greece, Greek Cyprus and Egypt.

"The latest efforts of Greece and the Greek Cypriot Administration to involve the countries in the region, in addition to the EU countries, in their maximalist national policies do not serve peace and stability in the Eastern Mediterranean," Foreign Ministry spokesman Hami Aksoy said in statement.

"Countries in the Eastern Mediterranean neither have authority, nor responsibility nor a word to say concerning the Aegean problems and the Cyprus issue," he noted.

The trilateral statement, which came after Greece, Greek Cyprus and Egypt's foreign ministers met in New York on Sept. 27, "condemned" what it said were Turkey's "unlawful" actions in the Aegean Sea and the Eastern Mediterranean, calling its drilling activities in the region "illegal."

Rejecting the "baseless claims," Aksoy stressed "it is also insincere on part of Greece to make baseless claims against Turkey at a time [when] it extends messages of cooperation to us."

"We invite these countries to face the political, economic and geographic realities of the region, and to pursue policies of cooperation in conformity with these realities.

There is no other way for stability in the Eastern Mediterranean, and for a just and lasting settlement of the Cyprus issue," the spokesman said.

He also underscored that steps with political expediencies aiming to isolate and ignore Turkey and the Turkish Cypriots in the Eastern Mediterranean "have no chance of success."

"Projects which do not include Turkey and the Turkish Cypriots in this region will never be efficient and effective," the official noted. He also reiterated Turkey's determination to continue to defend resolutely both its and Turkish Cypriots' rights in the Eastern Mediterranean.

According to Turkey, the tension in the Eastern Mediterranean is based on the Greek Cypriot administration's unilateral actions that ignore the rights of the island's Turkish population.

The Greek Cypriots unilaterally declared a total of 13 so-called parcels in the Eastern Mediterranean as its Exclusive Economic Zone (EEZ) and allowed international oil and drilling companies to operate in these areas, which are anticipated to hold rich hydrocarbon reserves.

However, the majority of these parcels clash with the EEZ declared by the Turkish Republic of Northern Cyprus (TRNC), with the Greek Cypriot administration ignoring the fundamental rights of the TRNC to a share of the island's resources.

Turkey, which is also authorized by the TRNC, is currently running hydrocarbon exploration activities in the Eastern Mediterranean with its drilling vessels, the Fatih and the Yavuz. In addition, the country's two other seismic vessels, the Barbaros Hayrettin Paşa and MTA Oruç Reis, operate in the same region.