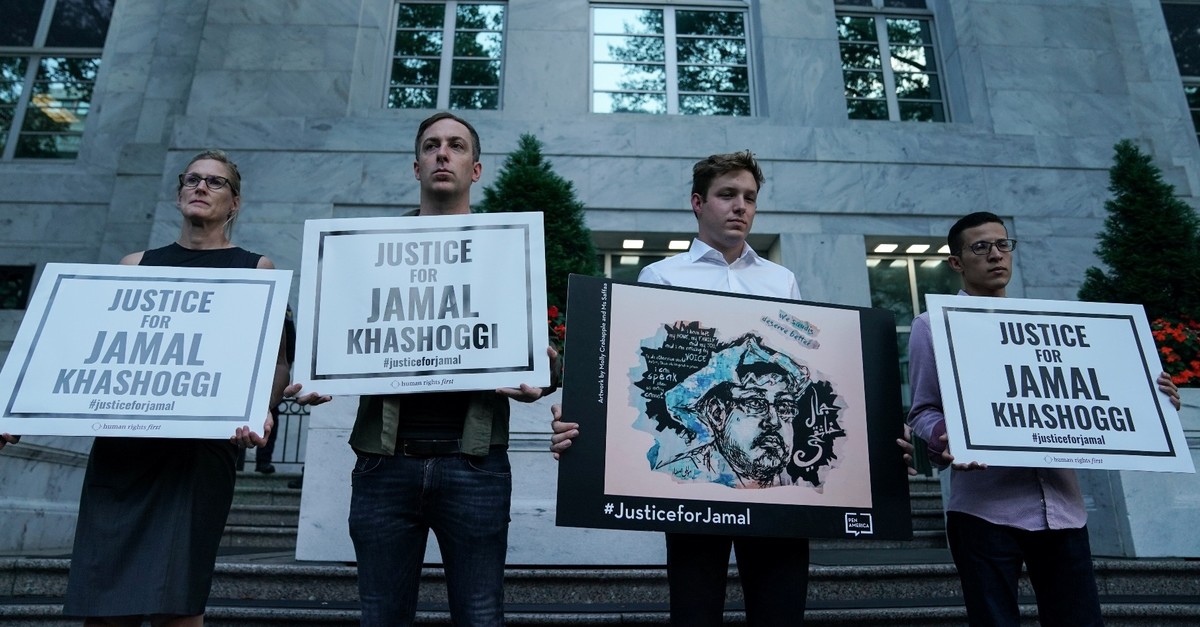 The Committee to Protect Journalists and other press freedom activists hold a candlelight vigil in front of the Saudi Embassy in Washington, U.S. to mark the anniversary of the killing of journalist Jamal Khashoggi, Oct. 2, 2019.
by Daily Sabah with AA Oct 04, 2019 12:16 am

A year after Jamal Khassoggi was killed and dismembered inside the Saudi Consulate in Istanbul, the international community continues to demand justice to honor his legacy

It has been a year since dissident Saudi journalist Jamal Khashoggi entered the Saudi Consulate in Istanbul and disappeared. On the first anniversary of the brutal murder, the international community is still asking for justice. The New York Times yesterday released an article to mark the first anniversary of the Khashoggi murder. The article "Jamal Khashoggi Is Still Owed Justice" said that "the journalist's savage murder exposed Saudi Arabia's ruler as an enemy of a free press. His legacy should not stop there."

"Nations that value human rights and a free press, along with a future, more sensible American administration, would do well to remember Mr. Khashoggi, and seek rapid, durable political reform in Saudi Arabia," it added.

Jonathan Rugman, a foreign affairs correspondent of Channel 4 News and a BAFTA Award-winning journalist with years of experience in both Washington and Istanbul, also said that the current state of an international investigation into the brutal murder of journalist Khashoggi at the Saudi Consulate in Istanbul last year is far from satisfactory.

Rugman thinks that a recent call for such an investigation still needs the backing of U.N. Secretary-General Antonio Guterres.

Speaking to Anadolu Agency (AA) at the London headquarters of Amnesty International during the launch of his book "The Killing in the Consulate: Investigating the Life and Death of Jamal Khashoggi," Rugman described the "shocking" killing as a "state-sanctioned murder."

The author underlined that this "extraordinary example of a most heinous crime committed against a journalist and how the world reacted to it" tells us about who we are.

Khashoggi, a Washington Post contributor hailing from a prominent Saudi family, walked into the Saudi Consulate on Oct.

2, 2018, to collect documents to marry his fiancee Hatice Cengiz, who was waiting for him outside. Yet, her waiting quickly turned frantic as he didn't come out again. Agents of the Saudi government killed Khashoggi inside the consulate and apparently dismembered his body, which has never been found.

"What balances do we strike between human rights and commercial and strategic advantage?" he asked.

"This story crystalizes one of the main concerns of our time, which is what happened what we call the rule-based order breaks down and innocent people are killed by their own government," he added. Rugman said he doesn't think "any journalist is happy with the state of the investigation" at the moment.

He said: "The U.N. rapporteur for extrajudicial executions Agnes Callamard has called for an international inquiry. That inquiry is not taking place. It doesn't have the backing of her own boss, the U.N. secretary-general [Guterres]."

Rugman said the diplomats who are allowed to watch the trial have sworn secrecy, and the crown prince's former media adviser Saud al-Qahtani is still free.

"He is not on trial even though the Saudi prosecutor indicated he was one of those involved in the crime," he said.

"I don't think there will be an international inquiry and I don't think, even if it takes place, the Saudis would either hand over suspects for any trial or indeed cooperate with the investigation at all. After all, they tried to destroy the evidence in Istanbul," he added.

Rugman's book, launched on the first anniversary of Khashoggi's murder, gives a detailed background of the "heinous" crime and looks at the U.S. administrations' connections with the Saudi kingdom.

Callamard, said in a previous report that the state of Saudi Arabia was responsible for the murder. The report also found"credible evidence" that linked Crown Prince Mohammed bin Salman (MBS) to the killing of Khashoggi. The rapporteur noted she had received no cooperation from Riyadh and minimal help from the U.S.

Meanwhile, a candlelight vigil was held Wednesday in Washington to mark the first anniversary of Khashoggi's murder. The vigil outside the Saudi Embassy was organized by the Committee to Protect Journalists (CPJ), Reporters without Borders, Pen America and Amnesty International.

The Turkish government should make a formal request to Guterres for an international criminal investigation into the murder of Khashoggi, a human rights activist also said Wednesday.

Speaking to AA during an event organized by the Middle East Monitor on the first anniversary of Khashoggi's killing, Human Rights Watch's Middle East and North Africa Director Sarah Leah Whitson said those who have been seriously implicated so far have been excluded from the investigation such as MBS and royal adviser al-Qahtani should be investigated by the U.N.

Pointing out that an important investigation was completed by the U.N.'s special rapporteur for extrajudicial executions,

Callamard, and her call for an international criminal investigation into the brutal killing of Khashoggi, Whitson said Callamard called for the recovery of the essential missing evidence of the involvement of those specifically responsible for the murder in a new investigation.

Whitson said by thinking that they could get away with such a crime, Saudi Arabia became a "subject of mockery around the world," adding the slow emergence of new information on the brutal murder "continues to trap the Saudi Arabian government in its lies." Another key speaker at the commemorative event, journalist Sue Turton, underlined that a year had to pass to digest the shock that came over Khashoggi's murder.

Emphasizing that countries thought to be honoring freedom of speech such as the U.S. and U.K. have not made enough effort to force Saudi Arabia to reveal what really happened in its Istanbul consulate a year ago, Turton said the world learned the details of the crime thanks to the Turkish authorities.

"If it wasn't for the Turkish authorities revealing the video of him going in and the audio of his death, we wouldn't even know that much," she said.

"The U.N. has tried to investigate but has been pushed back. They have been given very little help by Saudi Arabia. Saudi

Arabia's crown prince has given a tiny bit, saying that actually, yes, they are responsible, but this is not enough," she said, adding: "They need to come out and say how appalling this was, exactly what happened, who ordered it. And there needs to be a proper investigation that has not yet happened."

Also speaking to AA, another speaker at the event, The Guardian's former foreign news editor Victoria Brittain described the killing as a "terrible state murder."

"I think that the shock and the disgust of what happened in Britain is still very strong," even though a year has passed, she said.

"I wish there is going to be a transparent [and] deep settling of what really happened," she added.

Turkey works to serve cause of justice, AK Party says

Meanwhile, the Justice and Development Party (AK Party) said Wednesday that Turkey has carried out a principled process for the sake of justice while others were trying to serve their own benefits.

Referring to Khashoggi, party spokesman Ömer Çelik said: "Some people are trying to make this a bilateral issue between

Saudi Arabia and Turkey. This is certainly not the case, the king and of course the people of Saudi Arabia are out of the debate." Khashoggi's fiancee Cengiz also wrote in an article for the online edition of U.S. magazine Time on Wednesday.