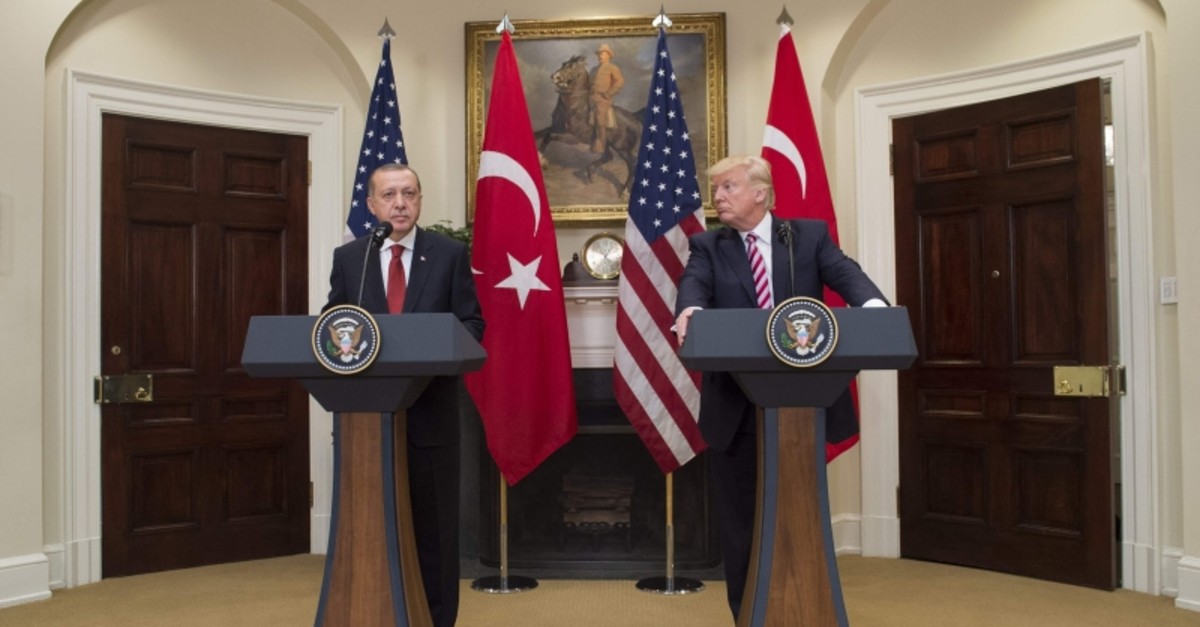 In this file photo taken on May 16, 2017 US President Donald Trump and Turkish President Recep Tayyip Erdogan speak to the press in the Roosevelt Room of the White House in Washington, DC. (AFP Photo)
by Daily Sabah Oct 17, 2019 11:57 am

A letter penned by U.S. President Donald Trump, thought by many to be a prank, received harsh criticism for bizarre language and disregard for diplomatic conventions. The letter was sent to President Recep Tayyip Erdoğan ahead of Turkey’s Operation Peace Spring in northeastern Syria, warning the country to avoid carrying it out.

“Let’s work out a good deal!” Trump says in the letter, allegedly distributed by the president during a heated White House meeting while the House of Representatives voted to condemn the U.S. withdrawal of troops from northeastern Syria amid the Turkish operation.

Many people took to Twitter, questioning the authenticity of the letter, as they slammed Trump’s use of words and language.

In the letter, Trump threatens to destroy Turkey’s economy as he tells Erdoğan to negotiate with a terrorist People's Protection Units (YPG) “general,” who he says is “willing to make concessions” he has never made in the past.

“Don’t be a tough guy, don’t be a fool. I will call you later,” Trump says at the end of the letter.

"This letter from Trump to Erdogan is surely one of the weirdest presidential communications in American history,” Brian Klaas, a political scientist at University College London said.

Meanwhile, many Turkish users on Twitter said Turkey’s response to the letter has already been given by launching the operation in Syria. They noted that Erdoğan disregarded Trump’s warning and gave the go-ahead to Turkish troops.

Erdoğan had also said many times that he will never sit at the negotiating table with terrorists and expressed determination that Turkey will continue to carry out the operation until all goals have been achieved.

A parody letter written on behalf of Erdoğan was shared by hundreds of Twitter users, who mocked the U.S. president’s language.

Amid mounting bipartisan criticism in Washington over the pullout of U.S. troops from Syria, Trump denied he had given Turkey a "green light" to launch Operation Peace Spring against the YPG.

Trump told reporters at the White House that he was not surprised by Erdoğan’s decision to launch the operation as he’s wanted to do that for a long time and has been building up military presence near the Syrian border.

He reportedly showed the letter in response to criticism, saying that he did not give Ankara the green light to launch the operation.

"I view the situation on the Turkish border with Syria to be, for the United States, strategically brilliant," Trump said. "Our soldiers are out of there, our soldiers are totally safe. They've got to work it out.”
Also on Wednesday, Trump said the PKK — considered by Turkey to be affiliated with the YPG — is “much worse than Daesh,” as he noted the U.S. was making them "look like angels."
Tensions between Turkey and the U.S. have been on the rise as Turkey launched Operation Peace Spring on Oct. 9 to clear its borders from terrorists with the goal to establish a safe zone along the border, which will facilitate the resettlement of hundreds of thousands of Syrians.

Turkey has long decried the threat from terrorists east of the Euphrates in northern Syria, pledging military action to prevent the formation of a “terrorist corridor” there.

Since 2016, Turkey’s Euphrates Shield and Olive Branch operations in northwestern Syria have liberated the region from YPG/PKK and Daesh terrorists, making it possible for nearly 400,000 Syrians who fled the violence to return home.