Erdoğan has given up nothing, Trump has given him everything: Pelosi, Schumer 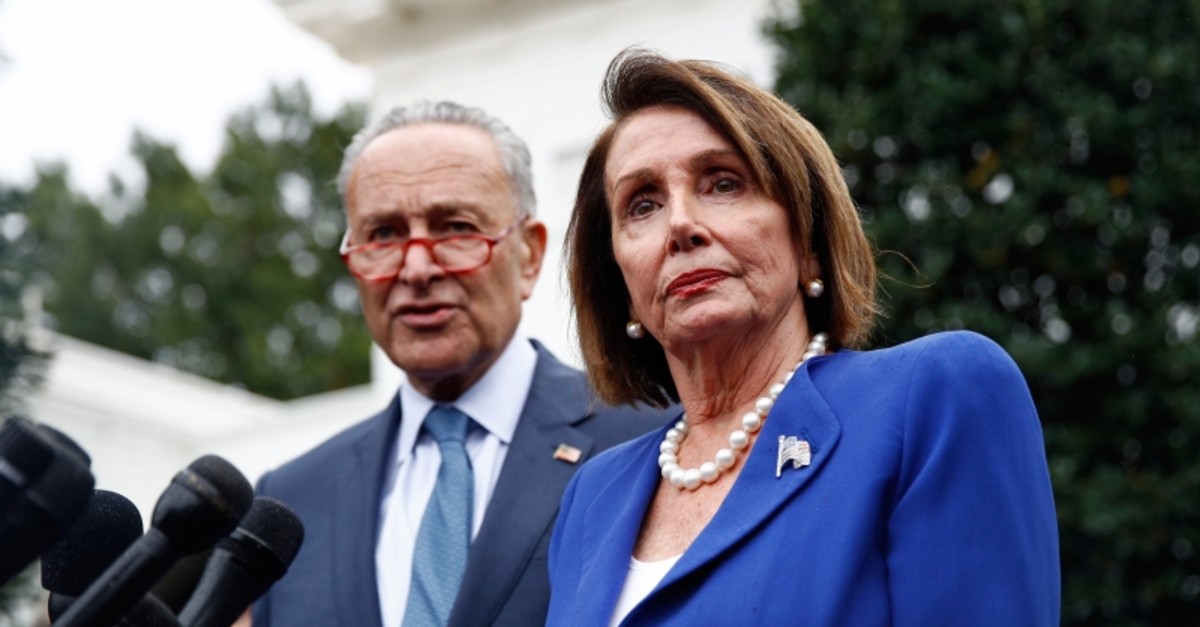 House Speaker Nancy Pelosi of Calif., right, speaks with members of the media alongside Senate Minority Leader Sen. Chuck Schumer of N.Y., after a meeting with President Donald Trump, Wednesday, Oct. 16, 2019, in Washington. (AP Photo)
by Daily Sabah Oct 19, 2019 1:54 am

U.S. House Speaker Nancy Pelosi and Senate Democratic leader Chuck Schumer have blasted the agreement between Turkey and the United States regarding the former's anti-terror operation in northeastern Syria, saying "Erdoğan has given up nothing, Trump has given him everything.

Schumer and Pelosi on Thursday called the agreement between the sides a "sham."

The agreement "seriously undermines the credibility of America's foreign policy and sends a dangerous message to our allies and adversaries alike that our word cannot be trusted," the leaders said in a statement.

Congress's top Democrats said the House of Representatives would vote on a bipartisan sanctions package against Turkey next week.

Turkish and U.S. delegations reached an agreement on Thursday to pause Turkey's counterterrorism operation in northern Syria for 120 hours, in which the PKK terrorist group's Syrian affiliate People's Protection Units (YPG) is expected to withdraw from the designated safe zone area.

In theory, the deal responds to Turkey's years' long concerns and expectations but the U.S. has backtracked on its deals before, which leaves the country in a precarious position. The NATO ally's continuing contact and support for the YPG means Ankara is approaching the process rather cautiously.

Thursday's meeting, co-chaired by Erdoğan and U.S. Vice President Mike Pence, lasted for two hours and 40 minutes and ended with a 13-article joint statement. The deal includes the collection of the YPG's heavy weapons, the withdrawal of the YPG from the safe zone within 120 hours and the removal of U.S. sanctions on Turkey. It was stated that the safe zone will be primarily enforced by the Turkish Armed Forces (TSK) while two sides agreed that closer coordination on the basis of common interests is vital.