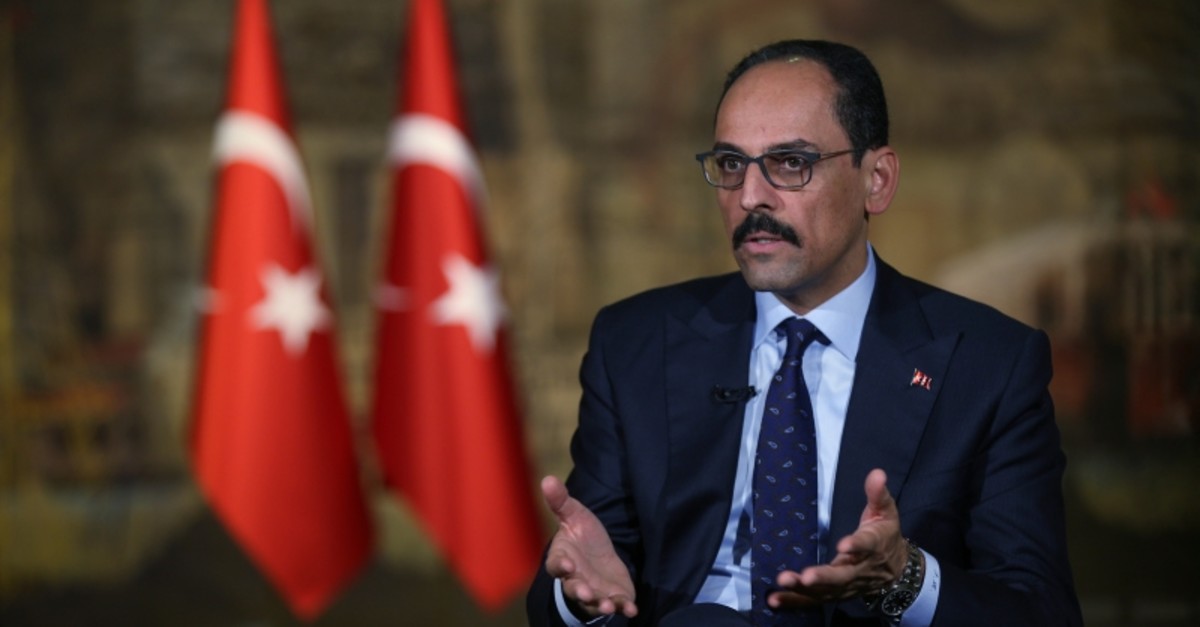 Turkey on Saturday urged the United States to use its "leverage" over PKK-linked People’s Protection Units (YPG) to ensure an orderly pullout under an agreement reached with Washington, the presidency spokesman said.

"We are committed to this agreement: Within five days they are supposed to leave and we have told our American colleagues to use their leverage, their connections to make sure that they leave without any incidents," spokesman Ibrahim Kalın told AFP in an interview in Istanbul.

The deal brokered by the United States gives YPG five days for a complete withdrawal - a deadline which expires Tuesday night.

Kalın said Turkey was sticking to its end of the deal.

"Since we reached this agreement with the American delegation, we have been committed to this deal," he said.

"Our president has ordered our troops to maintain their positions and not engage anybody."

Kalın noted that the YPG terrorists perpetrated 16 attacks in the border towns of Ras al-Ayn and Tal Abyad.

"All the incidents that have happened were caused by the YPG terrorists there but our military people are in touch with their (American) counterparts to make sure that they leave without any fighting."

The PKK is blacklisted as a terror group by Ankara, the U.S. and the European Union.

Kalın also said President Recep Tayyip Erdoğan wants Assad regime forces to move out of areas near the Turkish border so it can resettle up to 2 million refugees there. Kalın The Associated Press that Erdoğan will raise the issue in talks next week with Syria's ally, Russian President Vladimir Putin.

Regime troops have moved in to several locations in northeastern Syria this week, invited by YPG-led fighters to protect them from Turkey's counterterror operation.

Under an agreement made by the U.S. and Turkey, a pause has been in place since Friday evening to last for five days, during which YPG terrorists are supposed to pull back from border areas. The pause has been shaken by fighting in one border town, and there so far has been no sign of any withdrawals by the YPG-led forces.

"This is one of the topics that we will discuss with the Russians, because, again, we are not going to force any refugees to go to anywhere they don't want to go," he said. "We want to create conditions that will be suitable for them to return where they will feel safe."

Turkey has taken in about 3.6 million Syrians fleeing the conflict in their homeland but wants most of them to return.

U.S. forces were previously deployed in parts of northeast Syria alongside YPG-led forces, but President Donald Trump withdrew them abruptly, opening the way for Turkey's operation 11 days ago.

On Saturday evening, a medical convoy including the Syrian Red Crescent was allowed to pass through the Turkish-backed fighters' cordon to YPG-held areas in the town for the first time — a sign of easing tensions. The convoy delivered medical supplies and evacuated nearly 40 fighters. A Turkish Red Crescent convoy entered parts of the town held by Turkish-backed forces and delivered supplies there.

Turkey's Defense Ministry said it was "completely abiding" by the accord and that it was in "instantaneous coordination" with Washington to ensure the continuity of calm. The ministry accused YPG-led fighters of carrying out 14 "attacks and harassments" in the past 36 hours, most in the town of Ras al-Ayn, which is besieged by allied fighters before the cease-fire. It said the YPG terrorists used mortars, rockets, anti-aircraft and anti-tank heavy machine guns.

Turkey also said Saturday it has recaptured 41 suspected Daesh members who had fled a detention camp amid the chaos caused by the fighting earlier this week.

On Saturday, the Turkish Interior Minister Süleyman Soylu said 41 suspected Daesh members were re-captured after fleeing a detention camp amid fighting earlier this week in Syria. He said 195 other suspected Daesh members had already been recaptured. He said the captured Daesh suspects would be relocated to areas controlled by Turkey in northern Syria, including Afrin and al-Bab.

The YPG is accused of releasing some 750 Daesh members and families, amid Turkey's operation. The YPG says they broke out of their camp a week ago, attacking guards, amid heavy clashes and Turkish airstrikes nearby.

The agreement with the U.S. would virtually hand Turkey its aims in the operation, requiring YPG fighters to vacate a swath of territory in Syria along the Turkish border during the pause.

The YPG, which said it was in contact with the Americans during the negotiations, said it will abide by the halt in fighting but has not committed to any pull-out. Erdoğan warned Friday that Turkey will relaunch its operation on Tuesday when the deal runs out if the YPG terrorists don't pull out of a zone 30 kilometers (20-miles) deep running the entire length of the border.