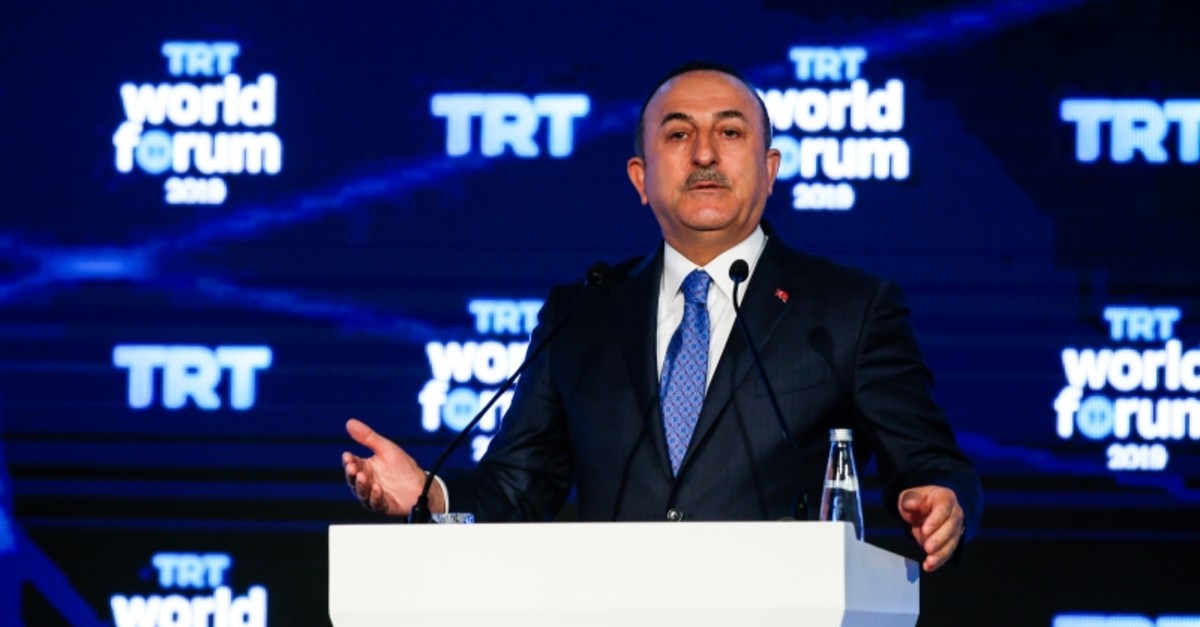 Turkey will resume its operation in Syria if the People's Protections Units (YPG) fails to withdraw from the specified area, Foreign Minister Mevlüt Çavuşoğlu said Monday, as he criticized the U.S. for failing to fulfill its promises regarding the PKK-linked YPG in Syria, leaving Turkey with no choice but to launch Operation Peace Spring.

Speaking at the TRT World Forum in Istanbul on Monday, the top Turkish diplomat said the U.S. continued to provide weapons for the terrorists as they were working with Turkey to create a safe zone near the border.

He highlighted that there are only 35 hours left until the deadline for the YPG to withdraw from the designated area in line with the U.S.-Turkey deal and that Turkey will relaunch the paused operation if the terrorists fail to leave the area.

"Why did our ally, the U.S., provide weapons to YPG terrorists after Daesh was defeated? The U.S. security establishment did not fulfill its promises," Çavuşoğlu said.

"Turkey has never used chemical weapons in its history. We are committed to international agreements and do not have any chemical weapons in our inventory, therefore, such claims are false," he said, as he highlighted that the operation only targets YPG and Daesh terrorists.

"The Kurds are not our enemies. We do not have anything against Kurds. We have strong relations with the Kurdish administration in northern Iraq and we host 350,000 Syrian Kurds," he said.

Çavuşoğlu noted that he will accompany President Recep Tayyip Erdoğan on his visit to Sochi on Tuesday and hold a critical meeting with Russian President Vladimir Putin regarding Syria.

The third edition of an annual international meeting hosted by Turkey's public broadcaster TRT kicked off in Istanbul on Monday with a particular focus on globalization.

The two-day TRT World Forum with the theme "Globalization in Retreat: Risks and Opportunities" brought together opinion leaders, politicians, academics and journalists from many countries across the world.

The forum will be held over two days with more than 10 sessions to discuss issues that occupy the world agenda such as right-wing terrorism, the rise of populism and nationalism, the future of the Middle East, trade wars, the future of the European Union and the cooperation of emerging powers.

The murder of Saudi journalist Jamal Khashoggi will be discussed on the second day of the TRT World Forum in Istanbul.

A special session will be dedicated to the issue, addressing Khashoggi's murder at the Saudi consulate in Istanbul and its connection to changing geopolitical balances in the Middle East.